You are at:Home»Latest»Team’s Up – Duffy starts in 3-5-2 with Edouard and Ajeti up front, Christie drops to the bench

NEIL LENNON today gives Shane Duffy his Celtic debut as the Celtic manager opts to return to the 3-5-2 formation that the support has been calling for.  That means the striking partnership of Edouard and Ajeti will get a chance to shine in the Highlands.

Barkas is in goals, hoping for a clean sheet and another chance to get a game under his belt and to settle into life in the Scottish Premiership. With Fraser Forster once again available the Greek international keeper will be aiming to convince Lennon that there’s no need to go back to Southampton for another loan deal.

The back three of Ajer, Duffy and Jullien is mightily impressive. Celtic finished the game against Motherwell with Frimpong going down the wide channels on the right with James Forrest doing the same on the left and that looked the best option for Celtic. Lennon took note and both start today in these wing wing back positions, Frimpong on the right and Forrest the left wingback.

Ntcham, McGregor and captain Scott Brown make up the 5 in the middle of the park.

Kick-off is at 3pm and the match is available via the Ross County PPV service.

Here is your #CelticFC starting XI and subs to take on @RossCounty 👊🍀 pic.twitter.com/zLYM5Rs6k8 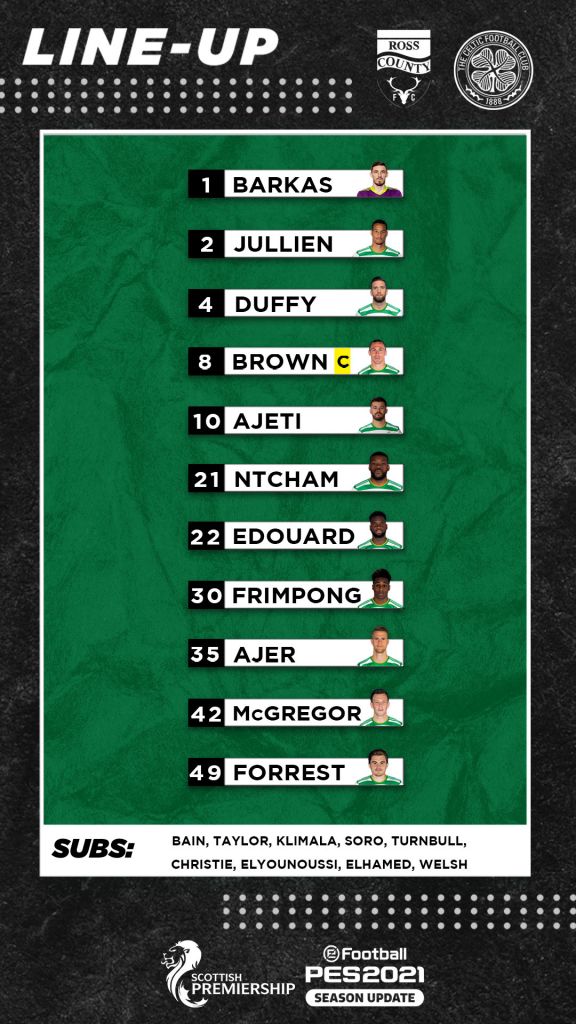