You are at:Home»Latest»“Tell me the old, old story, A hat-trick for McGrory,” the forgotten songs of our grandfathers

We received this message yesterday from Gerard McGonigle relating to his early memories of his Celtic supporting dad singing a song about Jimmy McGrory.

“When I was growing up I would hear my Dad and some of his friends sing a song about Jimmy McGrory scoring 3 goals in 3 minutes.

“My Dad passed quite a few years ago and I have been trying to get the words to that song.

“I remember that the song described each of the 3 goals.

“Would you happen to know of this song & the words? I would love to have them. 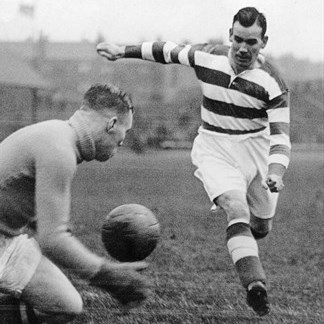 Who better to ask than David Potter?

“I seem to recall my father singing to the tune of the revivalist hymn “Tell Me the Old, Old Story,” David replied.

He added, “as I said, it went to the tune of the revivalist hymn much sung by the Salvation Army in the 1930s,” David explained. Here are the words…

“Tell me the old, old story,

A hat-trick for McGrory

A victory for the Celtic

And all in double quick time!

Delaney crossed to the centre

And Jimmy finished the job,

And the cross found McGrory’s head!

When Murphy did the same

And headed home his third!

All glory to McGrory

The pride of the Garngad!

He’s the hero of the Celtic

And he makes the Rangers sad!

“It went something like that, anyway! I wish I had paid more attention!

Another revivalist hymn provided the tune to these words,” David continued.

“Look forever to Jimmy, his flicks, his shots and his headers

Look forever to Jimmy, he will carry you through!

He’ll carry you through the hue

To beat the bar stewards in blue!

Look forever to Jimmy, he will carry you through!”

And there’s more from David Potter, our esteemed Celtic historian: “There was also the poem,”…

We will win the Scottish Cup

In the goal Canadian Joe

Is strong enough to deny the foe

We’ve got Buchan and Jock from Croy

And Johnny Crum is the bhoy!

And on the wing Delaney’s speed

A Cleland boy, so fast and true

A loyal Celt, through and through.

But wait a bit, don’t go so fast

There in the pride o a his glory

“These may or may not help with Mr McGonigle’s enquiry. There were loads of such songs and poems – most of them sheer doggerel! As indeed with John Thomson. The 1930s were great times for such things. My father always recalled the great community singing at Celtic Park, likening it to a Welsh rugby crowd. Apparently “Erin’s Green Valleys” used to be quite something! 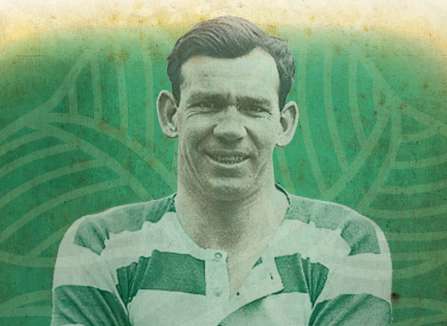 Jimmy McGrory is of course still included in the Celtic songs of the present.

“And they gave us James McGrory and Paul McStay,
They gave us Johnstone, Tully, Murdoch, Auld and Hay,
And most of the football greats,
Have passed through Parkhead’s gates,
All to play football the Glasgow Celtic way.”

Thanks to David Potter for his knowledge and assistance in answering Gerard McGonigle’s question.