You are at:Home»Latest»The 0/4 Ballot Question the Celtic Ticket Office need to answer

It has been over 16 months since Celtic Park was at capacity, for the match against St Mirren that saw Celtic take a significant step towards a ninth successive title with a big win over the Paisley side. The league was curtailed shortly afterwards and for the next season no supporters at all attended a mens game at Celtic Park.

In that time some supporters decided not to take the refund for the remaining games in the 2019/20 season, preferring to leave the money with the club. Then 60,000 supporters paid for their season tickets merely to watch he games on the Pass to Paradise stream, a service that was not without its technical difficulties.

No set of supporters anywhere showed such remarkable levels of financial support for their club during the global pandemic. They talk about the size of the football clubs south of the border yet this is mostly based on the levels of their television earnings. No English club comes anywhere near matching Celtic in terms of the financial support given to the football club during this Covid crisis. Indeed you can expand that to include all the clubs across the European game in all the so-called top five leagues and beyond those too. 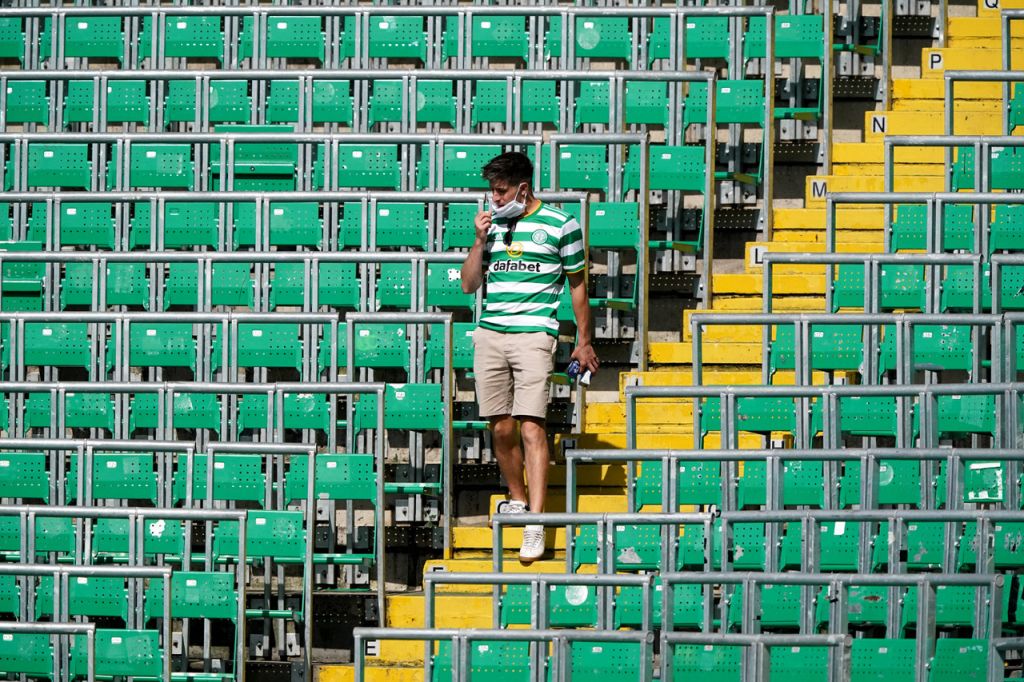 So when the authorities decided that supporters could begin to return to Paradise there was much anticipation and expectation from among the support – who despite the disappointments of the shambles of a season last year – backed the club once again by renewing their season tickets in huge numbers.

So by the time the Celtic ticket office had to consider how to distribute tickets they were of course well aware of all of this and will also have had a very good idea about just how much going to Paradise was missed by supporters who are all desperate to get back to a game.

They decided to have a ballot system but also determined that friendlies would not be counted for ballots for competitive games.

Ballot one was for 2000 tickets to see the return of Scotty Sinclair and his Preston North End team-mates leave Celtic Park with a 1-0 victory. Those supporters lucky in the ballot certainly had an emotional afternoon getting themselves back into Paradise and the entire support was delighted for them. 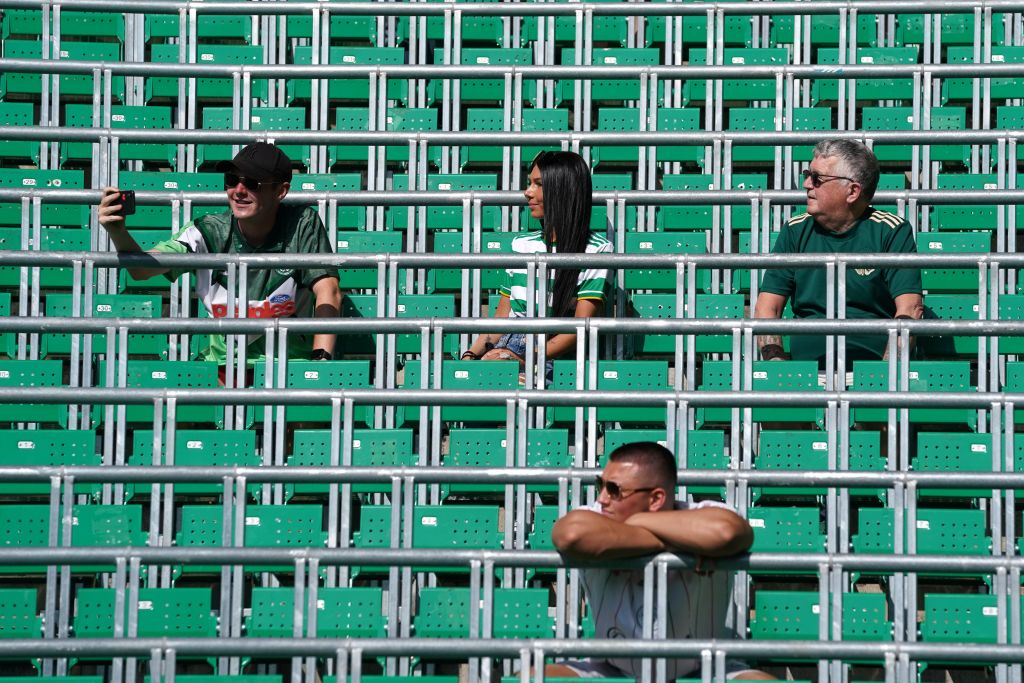 Ballot two was for the Champions League qualifier against FC Midtjylland and 9000 supporters were allowed into Celtic Park from that one. The 2000 at the game against Preston were included in that ballot.

Ballot three was friendly against West Ham last Saturday, so as it wasn’t a competitive game the 9000 fans at the Midtjylland match were once again included in the draw but the 2000 at the Preston match were excluded. For this game which Celtic last 6-2, there were 18,500 at that game.

So assuming that Celtic have 50,000 season ticket holders at the moment for the friendly matches 20,500 were able to get to one of these matches whereas 29,500 were unsuccessful.

Celtic’s next home game is the first home Scottish Premiership league match of the season against Dundee and the numbers of fans allowed to attend has increased to 24,500. With the ballot apparently now concluded Celtic will have informed the supporters successful in that, the clubs fourth ballot of the season, by now. If you have heard nothing you aren’t going to the game. 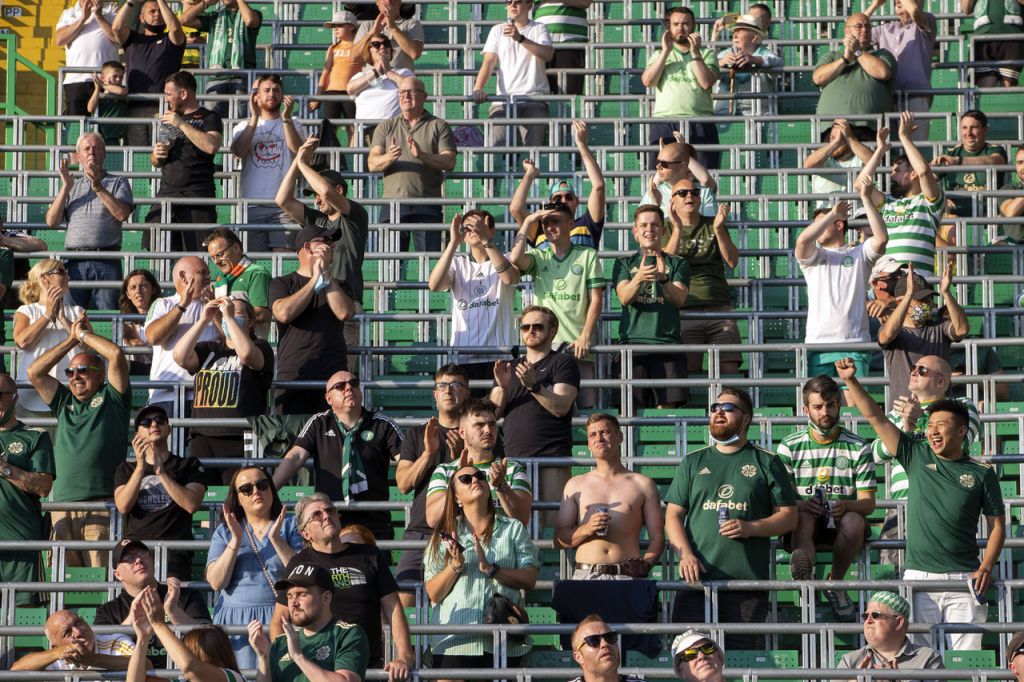 Last week I read a thread on twitter suggesting that supporters should join the Celtic fan media because that would guarantee them tickets for every game. Nothing could be further from the truth, in my case. So far my record from the Celtic ticket office ballots (which remains consistent with their usual record for big games at Hampden) is to leave me with a ballot record this season of 0/4 – and I am not alone.

Had Celtic decided that everyone will get a chance to attend a game as soon as possible and left it to Lady Luck to determine which game you ended up being allowed to attend, then by now, all of the supporters who have shown the club such incredible support over the past 16 months would have been back at Paradise by the time Celtic kick-off against Dundee next Sunday. 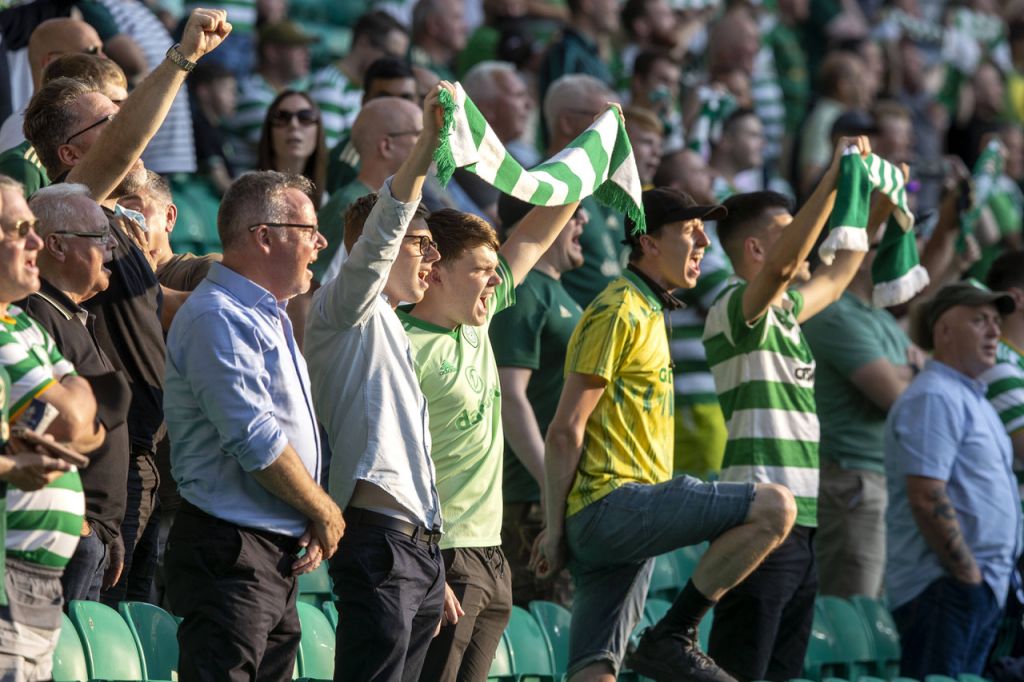 Instead there are supporters who haven’t even had an email from the club, pay your money and you only know you’re not getting to go to games by the lack of contact from Celtic. That though gives you plenty of time to consider just how incredibly lucky some supporters have been in these ballots, judging by a few quick scans on social media.

I thought I’d ask the ticket office when the supporters with a 0/4 record in their ballots are likely to get to a game and this was also sent to John Paul Taylor, the Celtic FC SLO.

For those of us with a 0/4 record in @CelticFCTickets ballots, is there any indication when we can expect to get to a game? @CelticFCSLO

“I asked the same question last week. Good luck getting an answer! No indication whatsoever as to how these draws are being done to guarantee a fair distribution of tickets. Another fine mess…” Jim McColl.

“Good question! I’m in that boat! I assume those who were successful aren’t put in the subsequent ballots so by logic we should all be successful in ballot soon,” The Bhoy W.

“Why did they treat the friendlies differently? Surely the fairest way was successful in one ballot, then out the rest til everyone has got a game,” Dazbhoy.

“Have a very angry 22 year old at home asking the same question. God help my household peace if he finds out that one of his mates has been successful twice,” SFM. 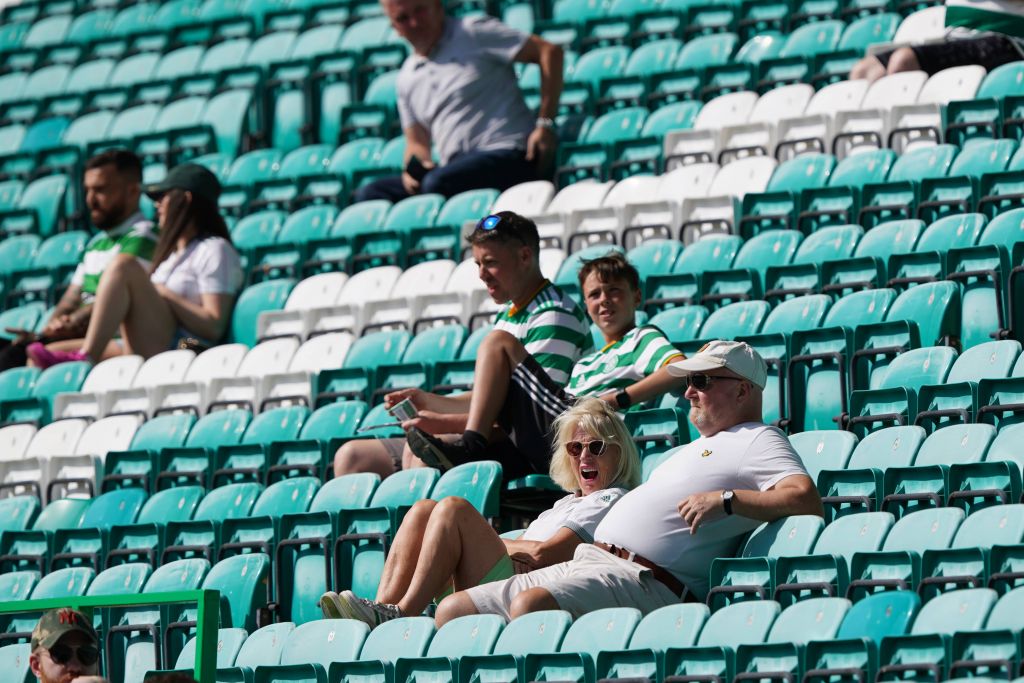 “Certain fans are getting to yet another game while normal fans haven’t been to any but that’s how Celtic role, all about certain fans and forget the rest,” Rab.

“0/4 for me and my 2 Bhoys, getting really annoyed now ballots are only for some, same craic with Hampden games never missed one in years then suddenly a ballot and yer getting heehaw,” Micky Burt.

“Looks like I’m a 0/4 as well! Thought those who hadn’t been drawn for first three games had a really good chance for Dundee?” John D

“My son’s friend was at the first European game not even a season ticket holder while both my son and I sit in the 0/4 camp,” Chris Boyle.

“Guess given the shambles of everything else going on we really shouldn’t be surprised…although still raging,” Colin T. 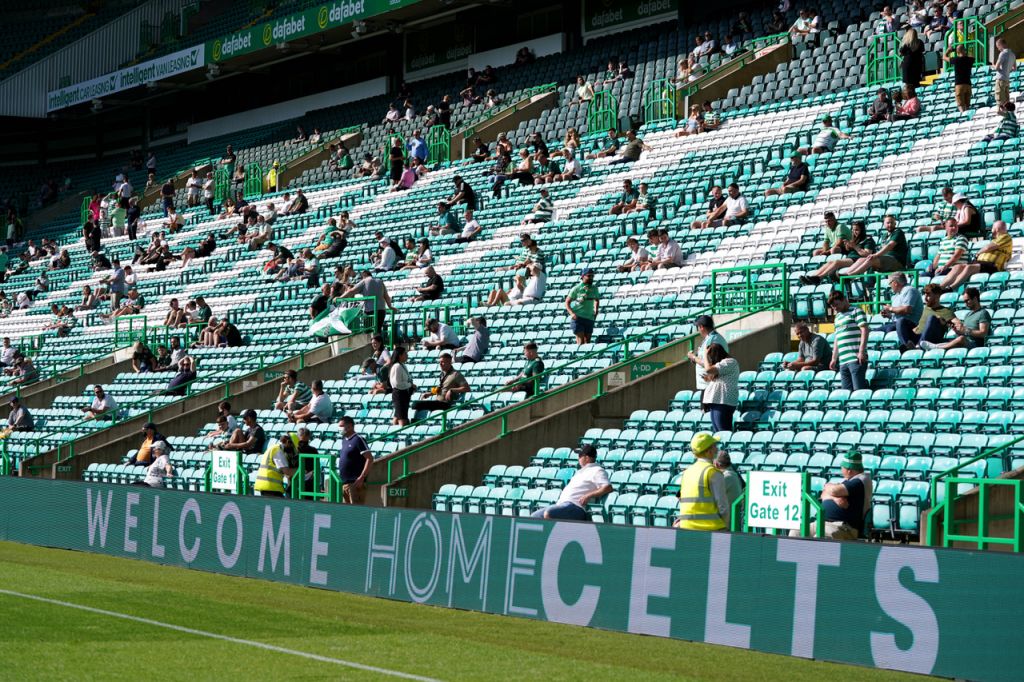 “Its definitely not a fair ballot the same people on my supporters bus have to 3 games how can that be possible?” Kate Dunbar.

“Think it’s only the competitive games that count though. So in effect they could attend 3.” JMcG.

“My mate got one for West Ham and one for Dundee,” TP Millar.

“0/4 for me too. Can someone please explain how the ballot is working so I can understand why I’m so unlucky and why others have had 3/4?” Celtic Ghirl.

“I got a ticket for the West Ham game, just me and not the two guys I travel with to all games, I was in section 410 up in the gods when my seat is 102……shambles” Hugh G.

“Well surely for starters the successful ones should be sitting out the next ballot. 0 for 4 for me also,” Karl Monaghan. 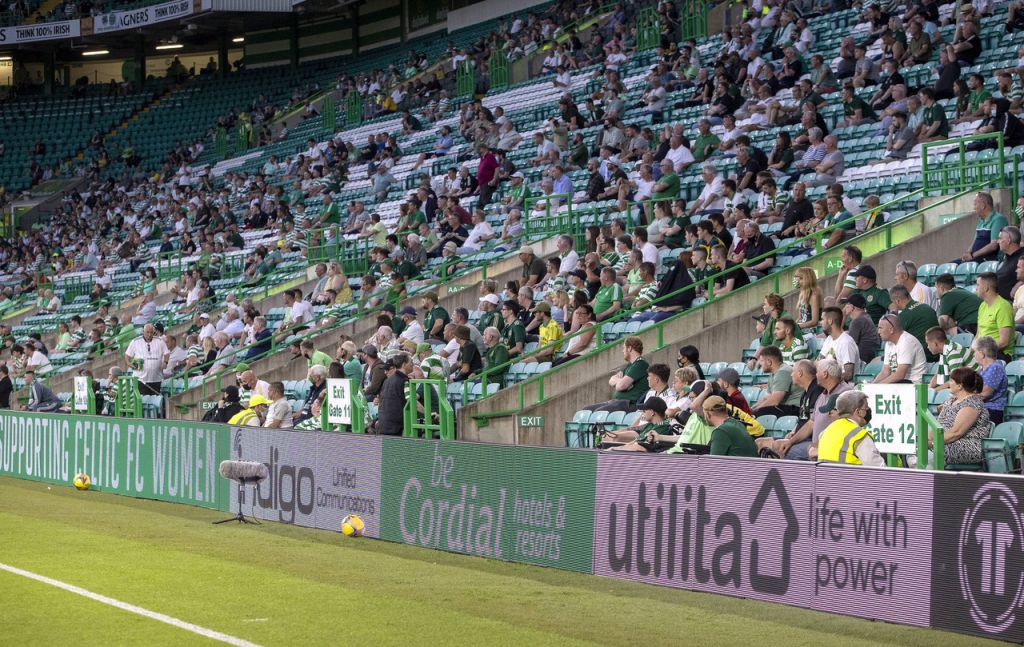 “This is Celtic organising this to be fair,” Sausagefingers.

“0/4 with me and the 5 guys that go yet we know plenty of folk that have had tickets for 3 of the games. An absolute joke,” Alan Raff.

“Friendlies dont count as ‘Your Turn’. So only ones who have had a competitive game are the 9,000 frm qualifier. Think a few have passed the ballot ticket on to someone else to go as well which maybe answer why a few have been to more than 1 so far,” Kevin Reynolds.

“Made worse by the fact some have been successful in more than 1 ballot already. Someone at the club needs to clarify the process for how this works,” Tony Nicol.

“Take the number of season ticket holders, subtract the attendances at each of the games so far, and you should be able to work out by which game everyone should have been successful once. If the ballots are transparent and above board.” DPC.

Have your say. You can add your comment below or email editor@thecelticstar.co.uk and we’ll compile supporters comments into a follow-up article later today. Hopefully Celtic will have replied by then.

Previous ArticleSviatchenko points to Celtic’s lack of fitness: Be Quiet, Lennon, let Postecoglou sort out your mess
Next Article Transfer Latest: “Celtic are about to complete the Joe Hart transfer”