You are at:Home»Latest»The actions of Joe Hart as defender confirmed to have ‘bad head knock’

Celtic ran out 2-1 winners in an exciting but nervy win over Ross County at Celtic Park. The Scottish Champions were far from their fluid best against a disciplined and organised County. However, Ange Postecoglou’s team managed to find a way to win as they came from behind thanks to goals from David Turnbull and Sead Haksabanovic.

Much of the takeaway from the game was the decision by David Munro to penalise Matt O’Riley for handball and give the Staggies a chance to go ahead, which they took through David Cancola. However, midway through the first half, there was another incident that requires more discussion – the injury of Moritz Jenz.

The German defender started at the heart of the defence alongside Cameron Carter-Vickers; although midway through the first half, he was involved in a head knock with a Ross County attacker and was deemed fine to play on. Following that he was sluggish and Joe Hart was alert to the player’s behaviour.

Hart looked animated as he attempted to shout at the Celtic bench for attention and when the ball died for a Celtic free-kick, he sprint from his own goal to alert the medical staff before telling Jenz to go down. The Celtic medical staff entered the field and brought Jenz with him after deeming him unable to continue. Carl Starfelt replaced him at the back as the game progressed.

Jenz’s partner confirmed that he had taken a ‘bad head knock’ but that the defender was feeling better today. 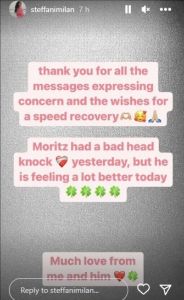 The protocols in football need to be reviewed and, following recommendations by former Celt Chris Sutton, more needs to be done to protect players from head injuries and the long-term damages associated with them.

Hart was alert and acted in his teammate’s interests yesterday, spotting that there was an issue and alerting the bench. It emphasises, even more, just how big a part of this team the Englishman is.