You are at:Home»Latest»The Blood Sacrifice – The Celtic, Glasgow Irish and the Great War

THE Blood Sacrifice is the fourth book in the epic, fascinating and widely read ‘Celtic, Glasgow Irish and the Great War’ series by Celtic Historian Ian McCallum.

August 1916 saw the Great War enter its third year and the start of the 1916/17 Scottish football season. The Blood Sacrifice covers the entire season, recording and commenting on every game played by the Celtic in its tilt for the Scottish First Division League championship and their attempts to retain the domestic treble of League championship, Glasgow FA Cup and the Glasgow Merchants Charity Cup. Was a double treble possible? 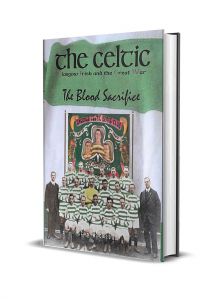 The immensely difficult circumstances in which the Celtic, alongside their rivals were forced to operate that season due to increasingly dire wartime restrictions are highlighted and explained. For example, special wartime rules introduced by the SFA and the Scottish League saw players forced to find war-related employment before they were allowed to play football.

In Celtic’s case, for the most part their players return to shipyards, mines and foundries where they worked a minimum ten-hour shift, five-and-a-half-days a week, (fifty-five-hour week) before turning out on a Saturday to play football. All players were forced to work overtime during the week in order to get away early from work on a Saturday morning, or going into work on a Sunday, after a hard-physical game, very often carrying an injury in order to make up time. And all for next to no financial reward. And all for little or no financial recompense. 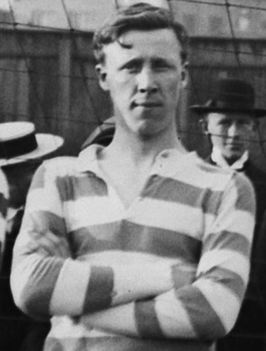 Peter Johnstone, one of the Celts who lost their life fighting in WW1

Like all football clubs, the Celtic had contributed players, both regular and reserve to the military. By the start of the season, Johnstone, McMaster, McCabe, Ribchester, Gilhooley, Cassidy, O’Kane and McGregor had all pulled on the uniform of the crown. Others were under constant threat of conscription with Charlie Shaw, Joe Dodds and Jimmy McMenemy all facing trial by a military tribunal that could order them into the army.

In most seasons, the Celtic management were faced with many footballing problems, however, the 1916/17 season would see all football clubs forced to confront many more problems than was usual.

Not all were football related, most were in some way or other related to the war. Travel restrictions, work commitments, loss of revenue, increased costs, and availability of players all added to a manager’s worries and concerns.

John McCartney of Hearts would call it the “most harassing season in all my experience!” Willie Maley, many years later would also comment on the season saying “ I want to put on record here a word of praise for my team in that 1916/17 season. My players were not big physically. How they stayed the pace and still toiled was wonderful.” 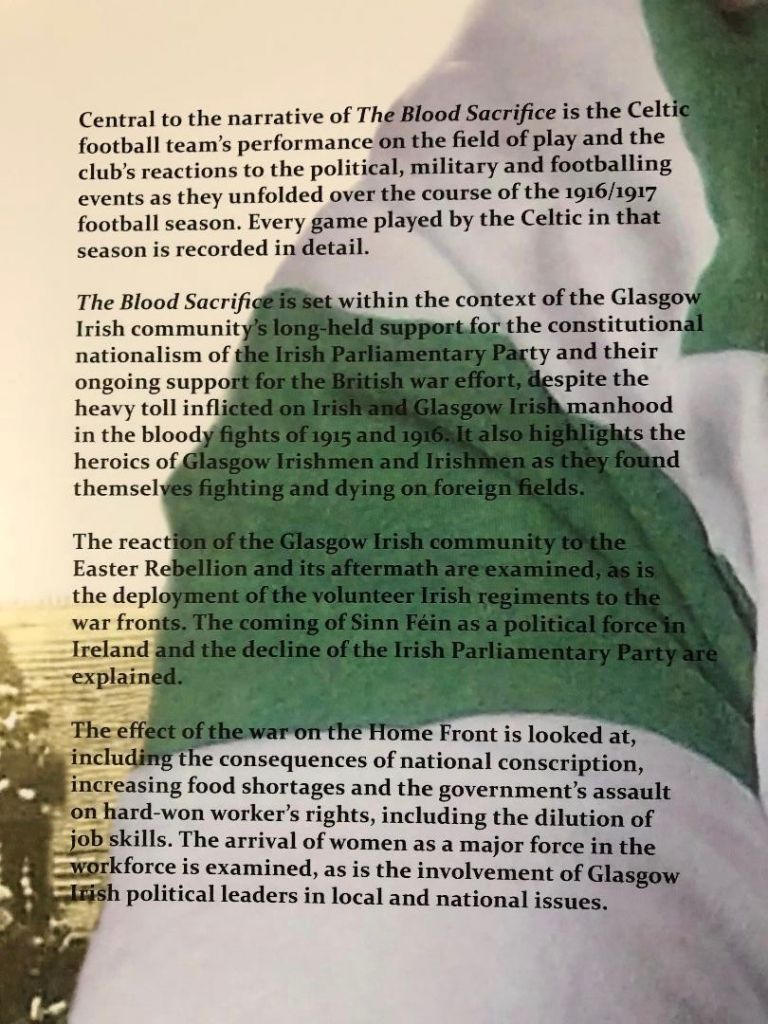 Within weeks of the start of the season the Celts would lose two mid-field stalwarts to the Army when Peter Johnstone and Johnny McMaster were ordered to report to their military units. Willie Maley was therefore forced to rejig his highly effective mid-field, but another body blow was dealt to the Celts when at the beginning of October they lost their captain “Sunny” Jim Young out for the rest of the season through a career ending injury. Only weeks into the new season, and Willie Maley was confronted with the total loss of the Celtic’s outstanding half back line.

The strenuous work regime mentioned earlier was bound to take its toll, and in November 1916, the diminutive Patsy Gallagher fell foul of the authorities having once too often taken time off work to recover from a football injury. Despite being punished by the Employment Tribunal, and after an inexplicable delay of a month, the Scottish League decided to lay-on their own rod to Patsy’s back suspending him for six weeks, and for good measure give the Celtic club a stoke or two by way of a large fine.

The action of the Scottish League was seen by many as political and a blatant attempt to hobble the Celts in their League campaign and enraged Celtic supporters.

By the halfway point in the season, war related problems saw the continuance of the League competition itself under review. Due to curtailed rail travel and increased costs and uncertainty over player availability, all clubs found it increasingly difficult to fulfil match fixtures. 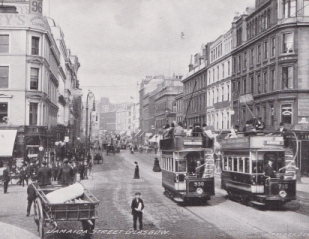 Jamaica Street in Glasgow during WW1

Players found it difficult to get away from work early enough to travel to the likes of Aberdeen, Dundee and Kirkcaldy. As a result, the Dons, Dundee and Raith Rovers found their place in the competition under threat. Many commentators believed the competition itself may have to be abandoned.

The book also covers the Home Front and the effects of the war on both the Glasgow Irish and the wider community. June 1916 saw full military conscription introduced with all able-bodied man liable to call up. Women were then required to stepped into the workplaces vacated by their menfolk.

German submarines severely restricted food imports which, allied to a bad harvest, saw severe food shortages on the Home Front. However, it was not all doom and gloom and in the “Glesga Night Oot” section the book highlights the recreations available to Glaswegians over the period.

On the War Fronts, the battles of 1916 and 1917 are highlighted with the Glasgow Irish community making massive blood sacrifices and suffering horrific casualties alongside their neighbours. The Celtic club too would suffer loss with former players Peter Johnstone, Tom Clifford and Leigh Roose all falling in battle. The account of their deaths are recounted in detail.

The aftermath of the Easter Rebellion and the effects and reactions both in Ireland and in Scotland are examined. With the Celtic management long-time supporters of John Redmond and the Home Government branch of the United Irish League, what was their reaction to the ongoing Irish situation and the continuing imposition of military law on the Irish people.

The Blood Sacrifice paints a vivid picture of a truly great Celtic side playing in the most difficult of circumstances and a Glasgow Irish community living through a period of colossal social change and desperate blood sacrifices.

The Blood Sacrifice and the few remaining copies of earlier books in the Celtic, Glasgow Irish and the Great War series are available from theglasgowirish.com 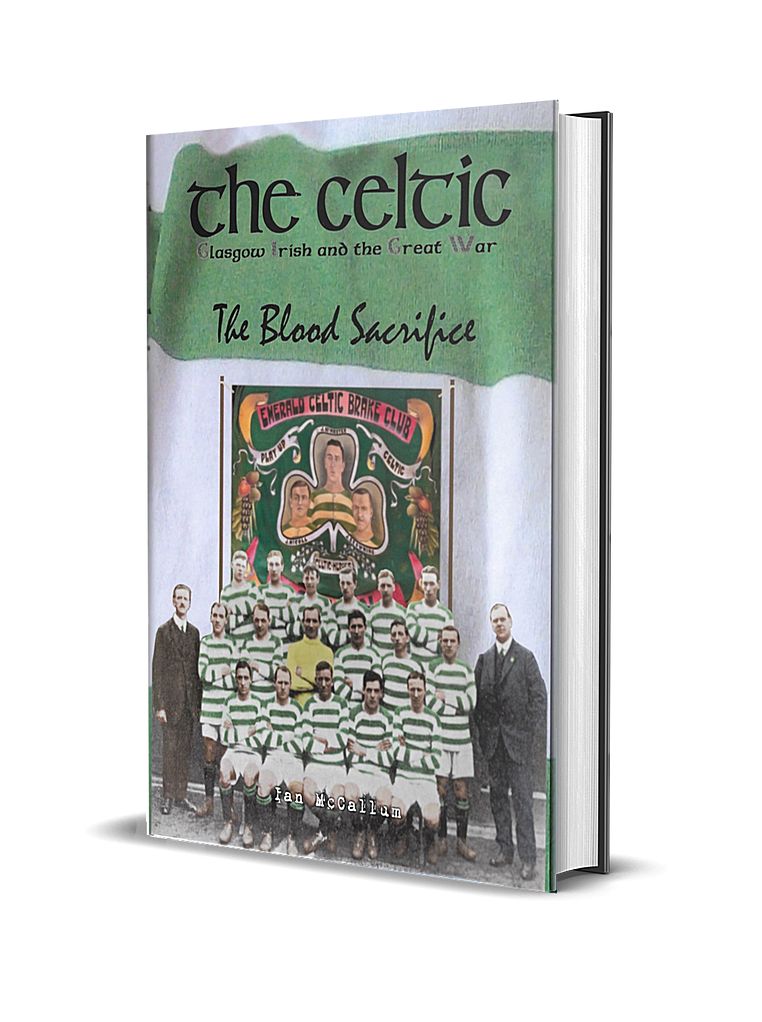