You are at:Home»Latest»The Charlie Nicholas Story – “One of Celtic’s greatest ever players – or at least he could have been,” David Potter

Charlie Nicholas was one of Celtic’s greatest ever players – or at least he could have been and, indeed, he should have been. He was recognisably very much one of the Celtic type, very Glasgow and very much one of the Celtic supporters. He was born in 1961, and was in his early years of primary school at the time of the great Jock Stein’s Celtic side. He played for a team called St Columba of Iona, Maryhill, before graduating to Celtic via the Celtic Boys club. His first game for the first team was in August 1979 in the Glasgow Cup, and enough was seen of him at that time to indicate that there was something worth preserving in that boy.

But manager Billy McNeill did not rush the starlet, keeping him out of the limelight for the 1979/80 season, while at the same time doing nothing to discourage the stories emanating from those in the know that something special was to be unleashed. The unleashing happened at Kilmarnock on 16 August 1980 when, with Celtic comfortably ahead, the Rugby Park crowd saw the Beatles-style haircut, the fresh face and the undeniable football talent that was Charlie Nicholas come on to take the place of the tiring Frank McGarvey. 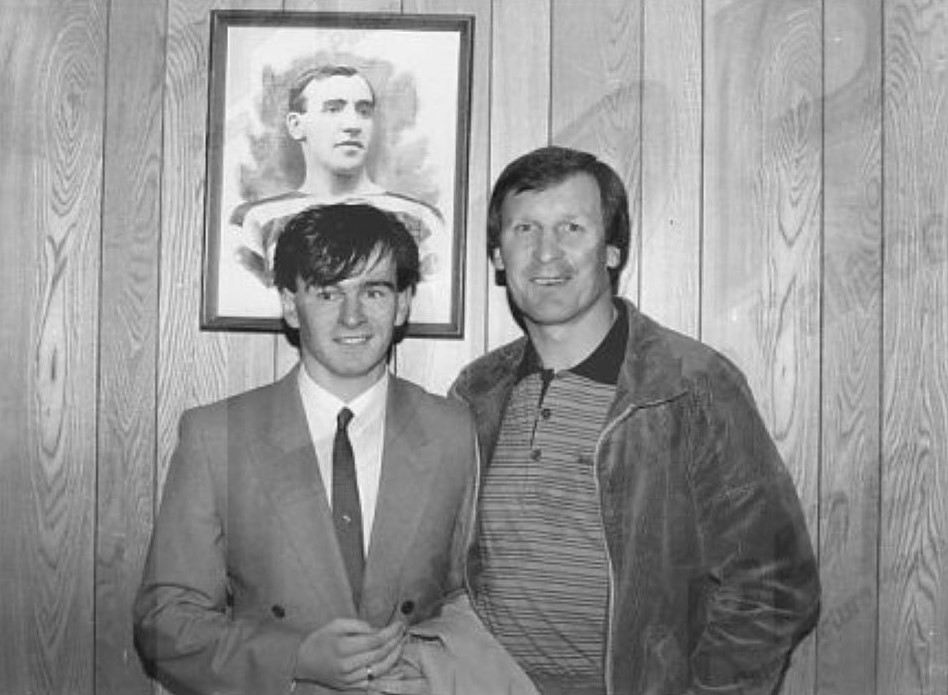 The speed with which Charlie became a cult hero was absolutely breathtaking. In the month of September 1980, Charlie scored in every game that he played, and was even entrusted, at the tender age of 18, with the task of taking the penalties. In truth, there was something phenomenal here. The ball control, the visionary passing, the ability to take a goal, the speed and the commitment were all present. Even the veteran supporters of the McInally and Gallacher era were convinced that here was a splendid player. 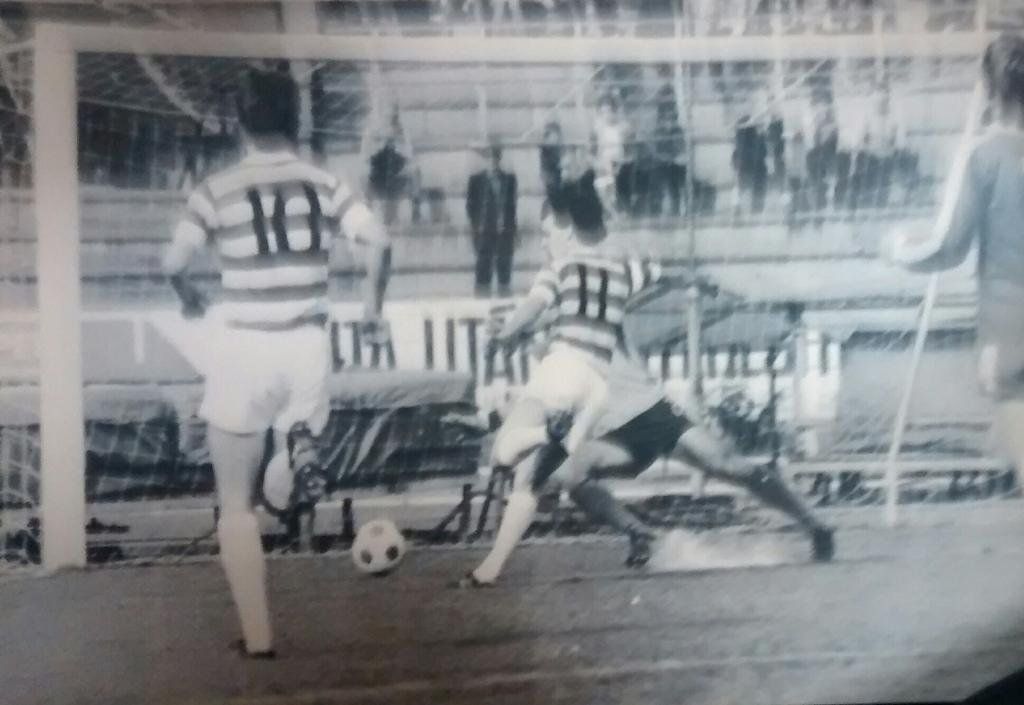 18 year old sensation Charlie Nicholas scores again on his full debut. in Hungary in a ECWC tie against Diosgyor Miskolc. This was the trip where Billy McNeill sorted out ‘journalist’ Gerry McNee. 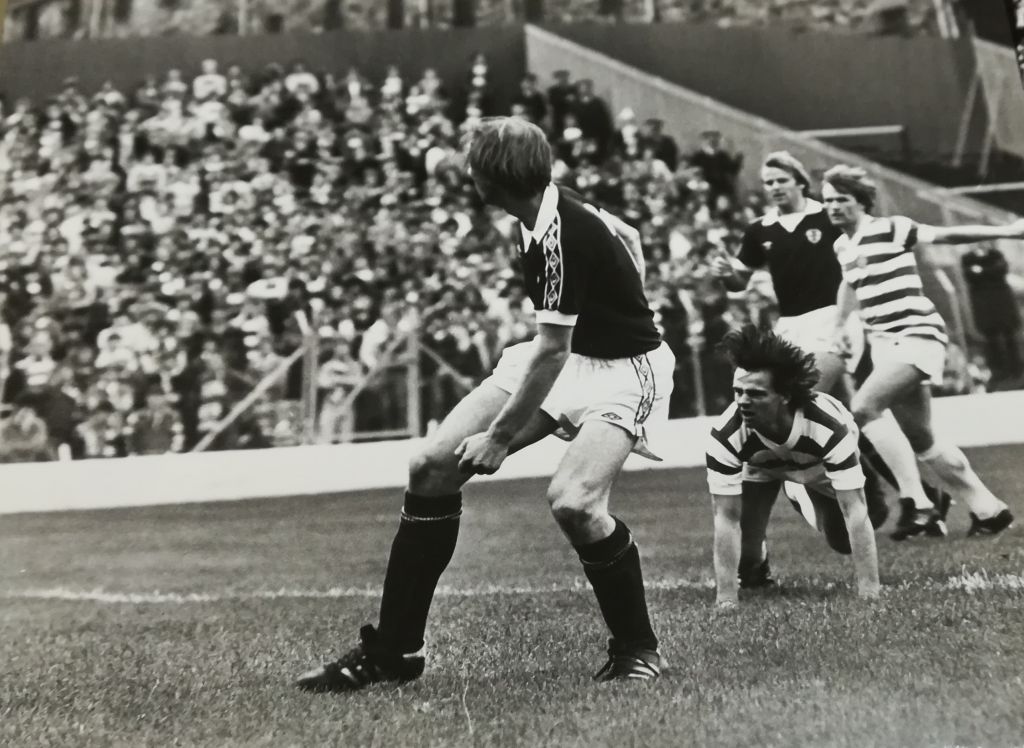 Nicholas scores against Hearts in a 2-0 win at Tynecastle, 13 September 1980 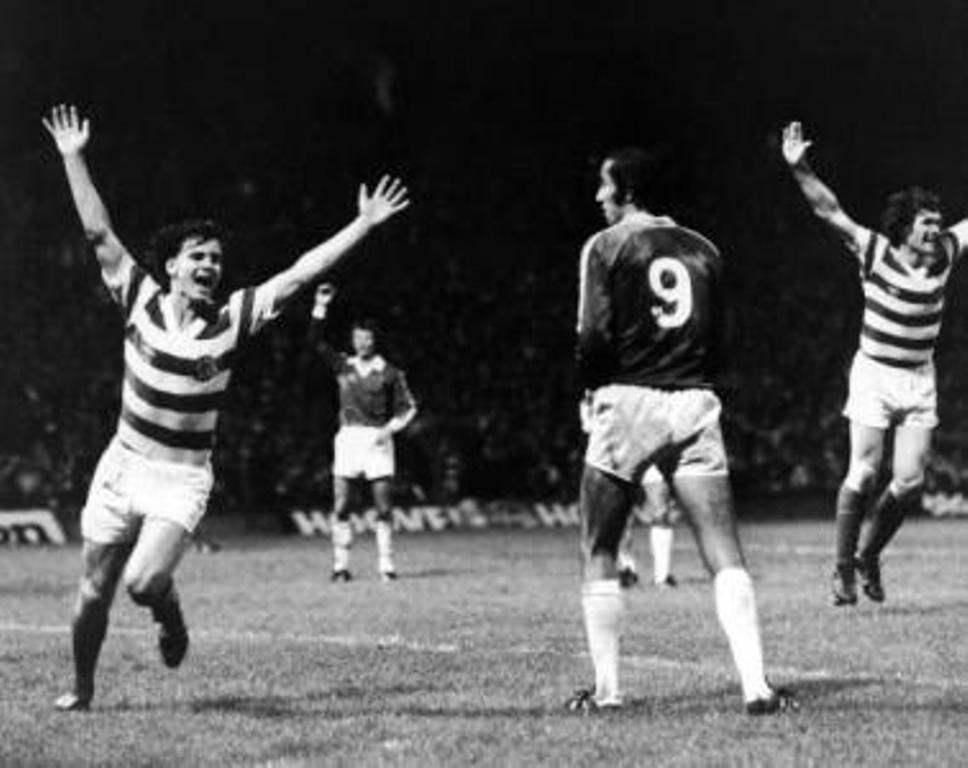 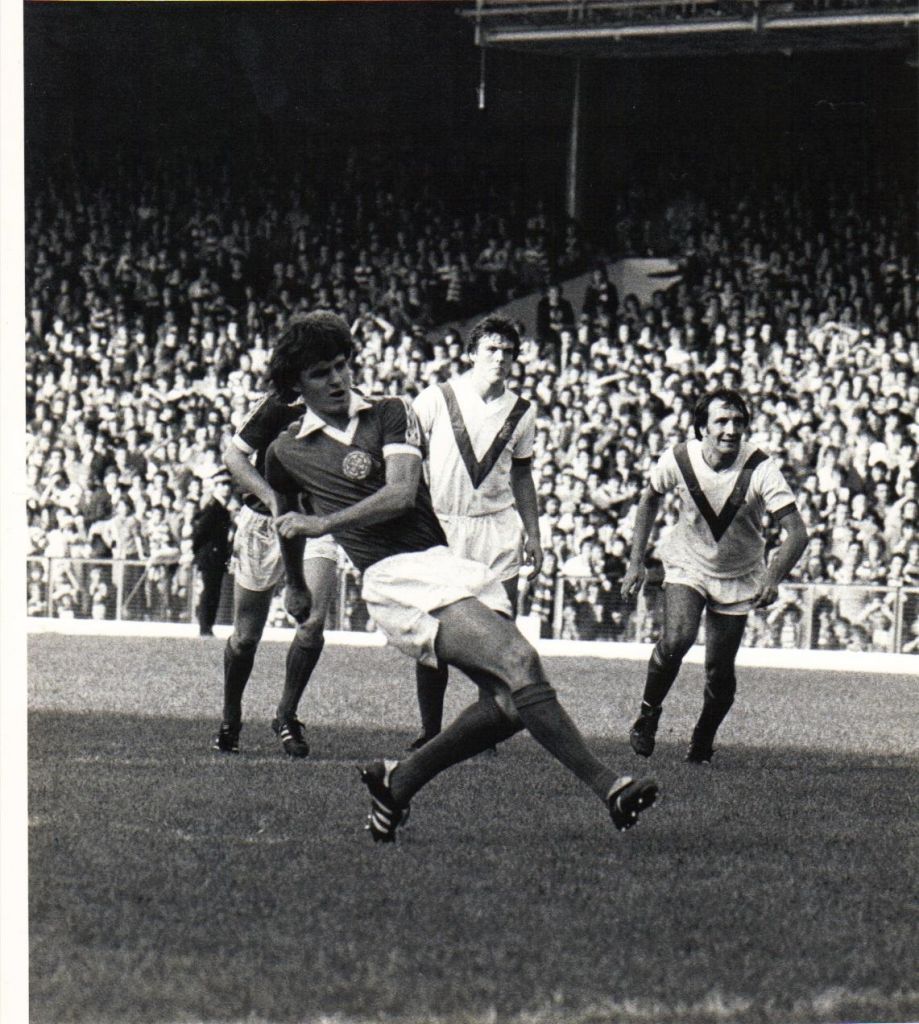 Nicholas scores from the penalty spot in a disappointing 1-1 draw with Airdrie at Celtic Park on 20 September 1980. 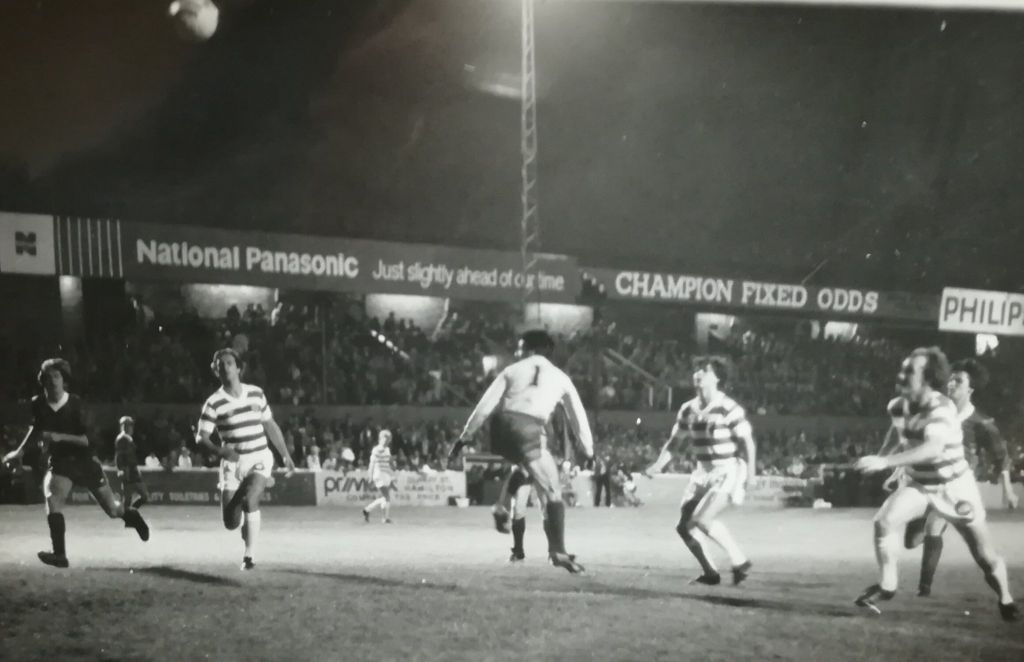 A great goal from Charlie Nicholas in 3-1 away League Cup win against Hamilton on 22 September 1980. 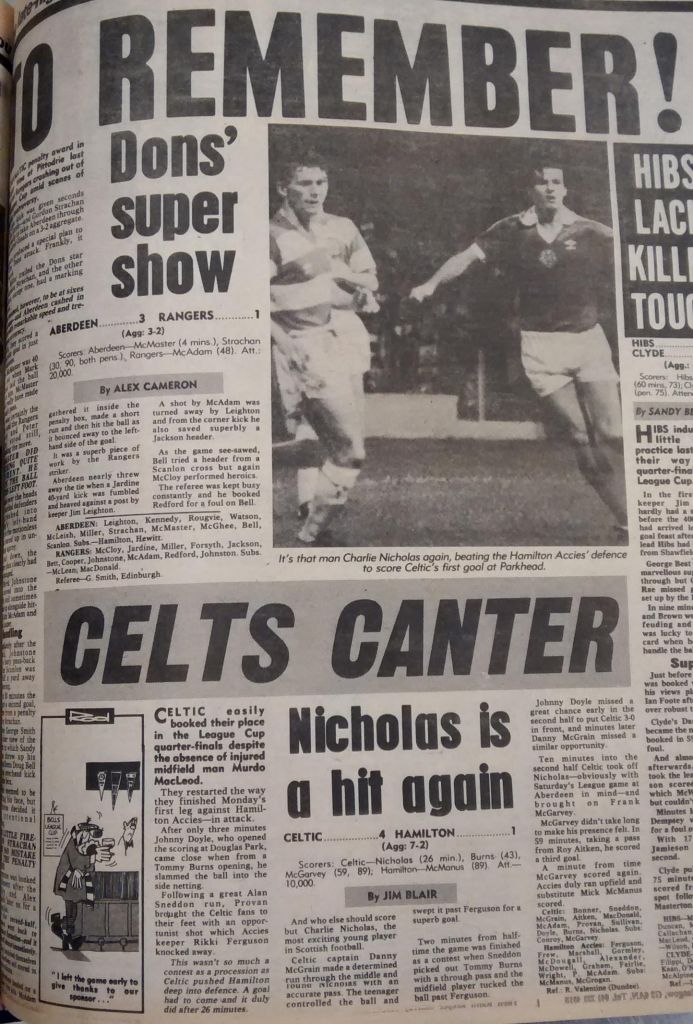 This video below is wrongly labelled as being from August 1980. The date of the game was 27 September and you can watch Charlie Nicholas in goalscoring action as he breaks a record scoring in nine consecutive Celtic matches.

The Celtic supporters of that era needed a hero. They always need someone in any era, of course, but in 1980 football was at a low ebb. Attendances were low, and there was a lack of the players with flair and personality who had so characterised the 1960s. Celtic had thrown away the Scottish League in April 1980 to Alex Ferguson’s Aberdeen in a way that had bewildered their supporters. To a certain extent they had redeemed themselves by winning the Scottish Cup against Rangers. But even that success had been tarnished by a disgraceful riot between the fans of the Old Firm, who had battled in front of the world’s TV cameras for the right, the acerbic claimed, to be called the thickest in Glasgow. It was clear that day that questions really had to be asked of Scottish society, not least about the palpable failure of the education system.

Scotland’s national side had not yet recovered from Argentina in 1978, and Celtic had not yet recovered from the sale of Dalglish to Liverpool the year before that. There was a definite feeling that Celtic were going nowhere. In particular that disastrous selling of Dalglish had definitely sent out the signal that Celtic were not interested in the European Cup any more, an astonishingly pessimistic conclusion when they had actually won the trophy a decade previously. True, they had spectacularly defeated Real Madrid in the European Cup of 1980 – but only at Celtic Park. The return leg had seen the scoreline reversed and overtaken. The team was full of honest, hard-working players, but flair and panache had gone out the window. The supporters yearned for the precision passing of Bobby Murdoch, the trickery of Jimmy Johnstone, the rapier thrusts of Joe McBride and certainly the pure professionalism of Kenny Dalglish, now winning honours galore for Liverpool. 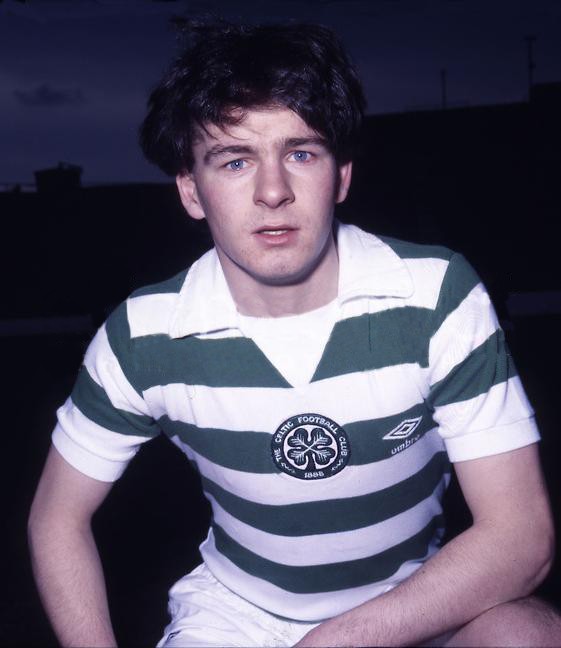 The pall of depression hanging over Parkhead was visible, even tangible. The huge stadium had vast empty spaces on most match days. The fans stayed loyal but had that glazed, abandoned, deserted air about them.

They still loved the Celtic, the green-and-white jerseys and manager Billy McNeill. They were less enchanted about the directors. There was quite simply the feeling that if Celtic did unearth another great player, he would be sold. That had happened with Macari, Hay and Dalglish. Celtic supporters did not like that. They could never come to terms with the notion that Celtic were only in business to supply the English teams with talent. There was no excuse for that notion, as Celtic had been the first British team to win the European Cup. Asset-stripping could only be explained in terms of money-grubbing and pocket-lining. 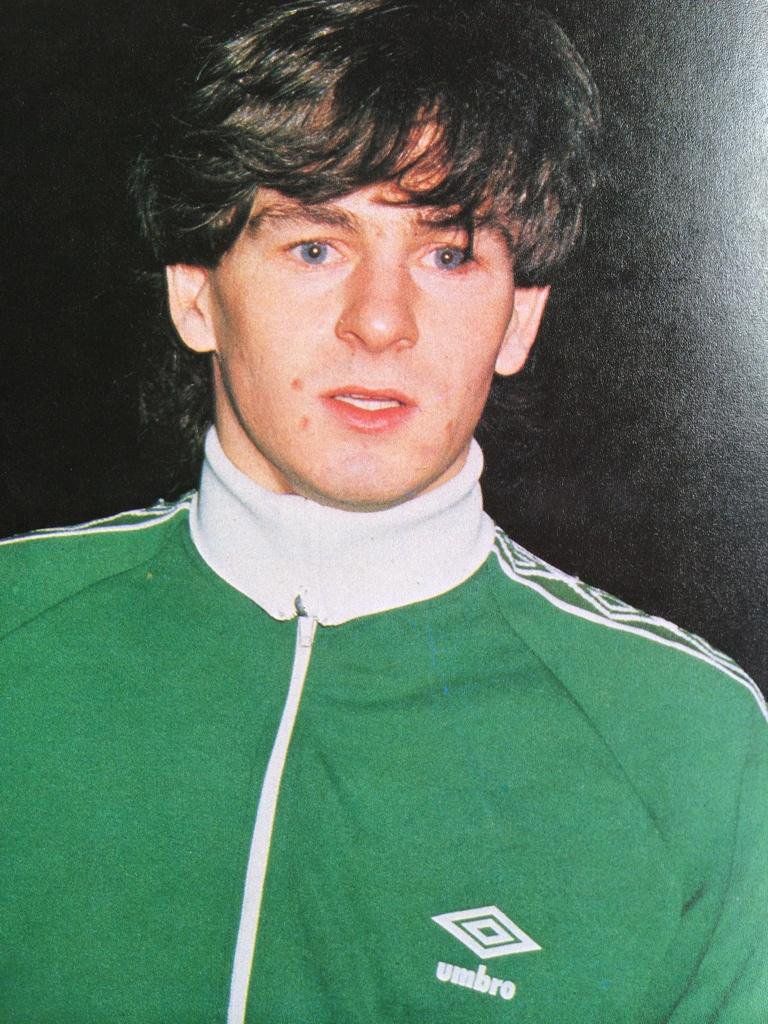 Tied in with this was the broader footballing status of Scotland. The nation had earned deserved worldwide ridicule for the Argentina fiasco of 1978, and had yet to recover its self-respect, even though the great Jock Stein was now the manager. Politically as well in 1980, there was a reason for this massive inferiority complex. She was called Margaret Thatcher, voted in by the south-east of England, which outpopulated and outshone Scotland in terms of wealth. Scotland, already by 1980, was on the receiving end of quite a few rounds of the guns, and unemployment was rising inexorably.

The stage was thus set for a cult hero. Charlie Napier of the 1930s and Charlie Tully of the 1950s had both been sung about – “Clap, clap hands, here comes Charlie”. Now a third person of that name entered the scene, and for ever so short a time, brightened Parkhead before plunging it back again into unrelieved gloom.

Previous ArticleVideo: John Hartson Begins The Green And Whitewash, On This Day 2003
Next Article Harry Hood, Twice as Good – A birthday for Harry, a debut for Kenny and the Road to Milan is underway