You are at:Home»Latest»The damning striking stat that cost us this year

Celtic finished their season on Saturday afternoon after a 0-0 draw at Easter Road. The team relinquished their stranglehold over the Scottish game following four consecutive trebles and one of the criticisms levelled at Celtic has been their erratic shot selection at times.

According to SPFL Stat Centre, Celtic made 676 attempts at goal across the 38 league games, with 256 of these attempts being on target. Unfortunately, Celtic scored just 78 goals across the campaign – which was less than the season before, in which just 30 games were managed.

Odsonne Edouard topped the scoring charts with 18 goals but he was not at his best with COVID-19 and minor injuries seeing a few poor spells in front of goal. Albian Ajeti, meanwhile, has failed to impress despite starting brightly in the Hoops. The £5m acquisition from West Ham scored six goals in his first six games. Yet fitness concerns kept him out of the teams and fans are questioning whether he has a future at the club. 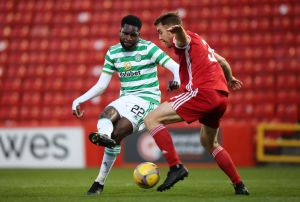 Leigh Griffiths has very publicly been battling with his fitness woes potentially costing Celtic. The player wasn’t fit for pre-season and as a result wasn’t fit to be called upon in the early parts of the season. Griffiths has scored five goals this season in eighteen appearances. The striker’s scoring record of 123 goals is impressive but the 30-year-old is anxiously waiting to find out whether he will be offered another year with the club.

The club need to address the failings in attack as Edouard will likely depart leaving a vacuum due to the goals that he brings. Eddie Howe, should he be announced as manager, will need to determine whether or not he wants to keep Ajeti and Griffiths or if he would rather use their wages on new players.

Undoubtedly the defensive calamities at set pieces have also cost us. However, the team were fashioning chances but were not capitalising on these opportunities. That is likely due to the fact that players were given the power to fire at will with Ryan Christie, Callum McGregor and David Turnbull all being culpable for shooting from outside the box.