In the previous instalment of The Celtic Star’s look at the forgotten years of the 1990’s we covered Celtic semi-final exit from the Scottish Cup after a replay to Motherwell by four goals to two.

A terrible run of form had left Celtic’s European qualification hopes hanging by a thread. As Celtic and Dundee United battled it out for that last UEFA Cup spot, Aberdeen and Rangers were going head to head for the title.

Celtic having gone five games without a win had dramatically turned things in their favour with a 5-1 win at Celtic Park against Dunfermline. Charlie Nicholas and Tommy Coyne had helped themselves to a brace apiece as Derek Whyte had added the fifth. Celtic had three more games to play and confidence was returning. 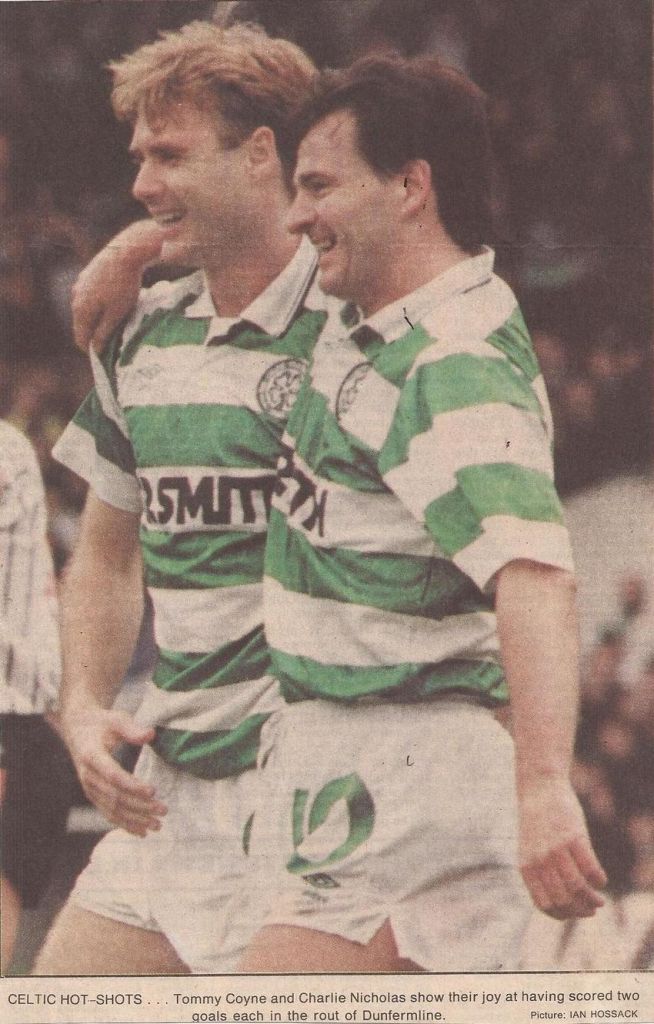 The toughest of those, on paper at least was a visit to Tynecastle to face Hearts who themselves could lay claim to a European place but would need to win against Celtic or their slim hopes would evaporate.

With a home game against St Mirren coming after the Tynecastle match and a last day encounter away to St Johnstone on the horizon there was certainly a feeling European football was indeed a possibility, if the visit to Gorgie could be navigated and the Celts could return with a win.

Celtic started the game without the services of central defender Paul Elliot who was suspended. It was a suspension that would last for the rest of the season. Celtic did have an in form striker in Charlie Nicholas with three goals in two games. 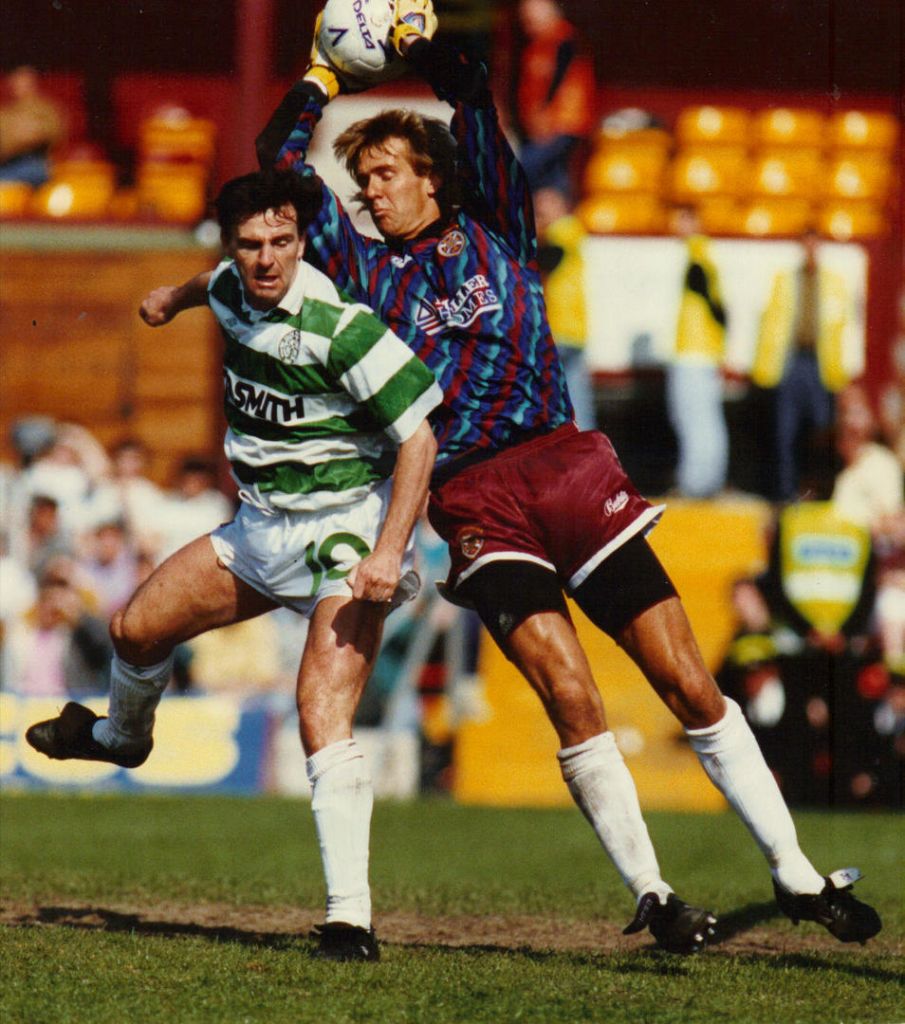 In the first half Nicholas had a header that flashed wide and a couple of efforts from distance. John Collins playing on the right, cut in on his left foot and fired a shot that went just wide.

Scott Crabbe had Hearts best opportunity but with both sides having chances, neither had really troubled either keeper by the break. Anton Rogan had picked up a yellow card for kicking the ball away having been penalised for a non-existent foul on John Robertson. The petulant response was to have repercussions later on.

Celtic started the second half well. Following a scuffed effort from Scott Crabbe, Joe Miller broker well through the middle and fed Tommy Coyne breaking on the right. At the second attempt Coyne found Nicholas at the far post but it didn’t quite come off as Nicholas had to settle for the corner.

In the 54th minute the breakthrough came and was somewhat reminiscent of the previous chance. This time from a throw in Joe Miller broke from midfield and once gain found Coyne, this time the first time ball evaded a static Hearts defence and following a hilarious fresh air kick from Hearts Alan McLaren, Nicholas had the easiest of tap ins at the back post to open the scoring in front of a packed Celtic end.

Celtic were looking good but it wouldn’t be quite as easy as hoped. Anton Rogan having been booked reacted to a late foot in tackle from Alan McLaren. Referee Mottram brought out the red card while ignoring completely McLaren’s part in the incident. Rogan was calmed down on the park by Paul McStay while Billy McNeill raced down the touchline to remind Rogan in no uncertain terms that no matter how frustrated he may be the Celtic shirt had to remain on his back, as the Celtic full back made a move to remove it. Within a minute Hearts were nearly level when Levein headed just wide.

As things got heated Scott Crabbe was booked for a late tackle on Steve Fulton and the Celtic player returned the favour and received the same punishment when leaving his foot in on a challenge on the same player moments later. It was becoming scrappy and football was becoming a secondary issue.

Eammon Bannon then had Hearts best chance of the game. Tosh McKinley beat Mark McNally far too easily and Bannon’s brilliant header looked goalbound until Pat Bonner came to Celtic’s rescue with a world class save to claw the ball away and to safety.

It was the last chance and Celtic held on for a massive win under late pressure from Hearts. One down, two to go and Hearts faint hopes of European qualification were now gone.

Celtic’s next match resulted in a 1-0 win over a stuffy St Mirren side at Celtic Park. Tommy Coyne’s 18th minute strike took Celtic’s Euro dreams to the last day and made Tommy the league’s top goal scorer. Not bad considering he’d been somewhat out of favour for periods of time as Celtic struggled to find the right balance up front. 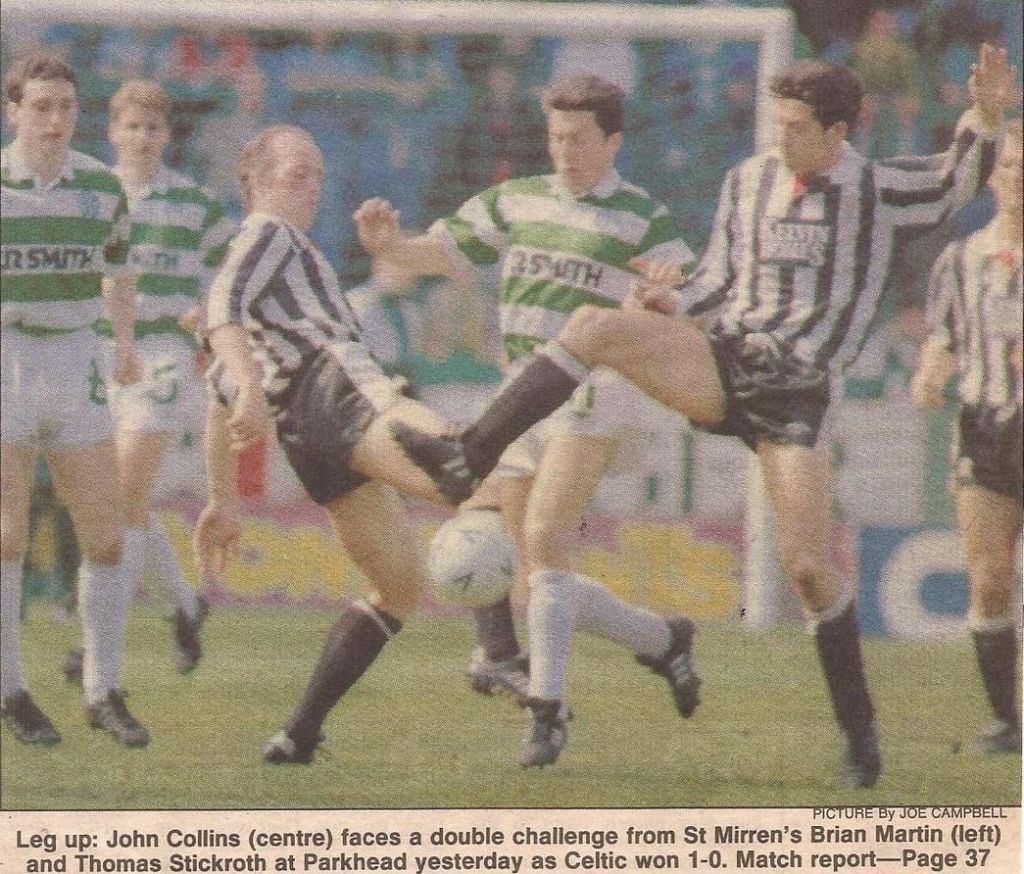 So onto the last game of the season. St Johnstone away – while Euro challengers Dundee United were playing a Dunfermline side given a 5-1 going over just two weeks previously.

It was going to take a united front and complete focus. Good timing then for a leaked document to be printed in the press claiming that Billy McNeill was to be sacked. This it’s fair to say caused a lot of anger among the fans at the timing of the leak. Chief executive Terry Cassidy who was very much the self-publicist immediately became a figure of dislike verging on disgust, from the Celtic support.

Off field issues looked to have infiltrated the football one again as Celtic fell behind to a Roddy Grant goal after less than a minute. Celtic had an unerring ability to shoot themselves in the foot on and off the park and it looked like it was going the same way against the Perth Saints. 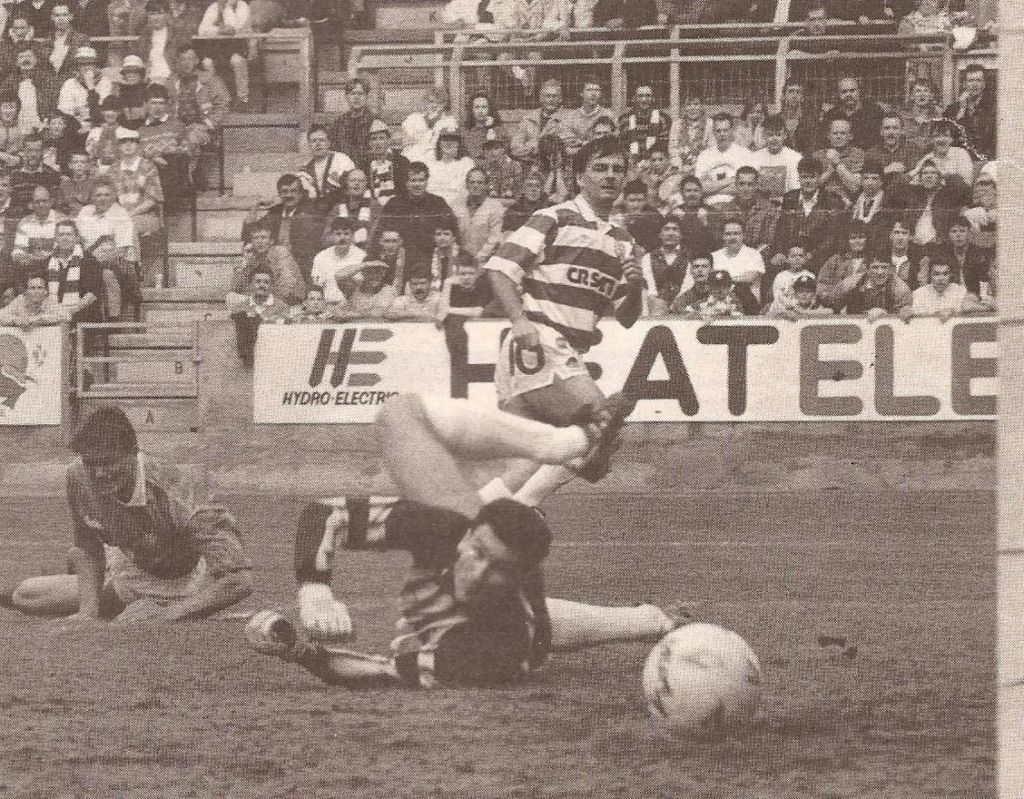 Charlie Nicholas got Celtic back into the game with a brilliantly taken finish in the 17th minute to draw Celtic level at the break. St Johnstone however were once gain in front within three minutes of the restart with Bingham pouncing on a Roddy Grant knock down and one again Celtic nerves were jangling. With Coyne missing a gilt edged opportunity it looked like it may not be Celtic’s day until Mike Galloway lobbed a delicate finish from a Gerry Creaney knock on from a Charlie Nicholas through ball to make it 2-2 in the 62nd minute. It was now very much game on.

Saints McVicar then gave Celtic the opportunity to win the points. His foul on Coyne resulted in a penalty that Tommy himself stepped up and converted with ten minutes to go. It was Coyne’s 18th goal and as things panned out, most important goal of the season. Celtic qualified for the UEFA cup after Dunfermline beat Dundee United at East End Park with a last minute goal from ex Celt Davie Moyes. 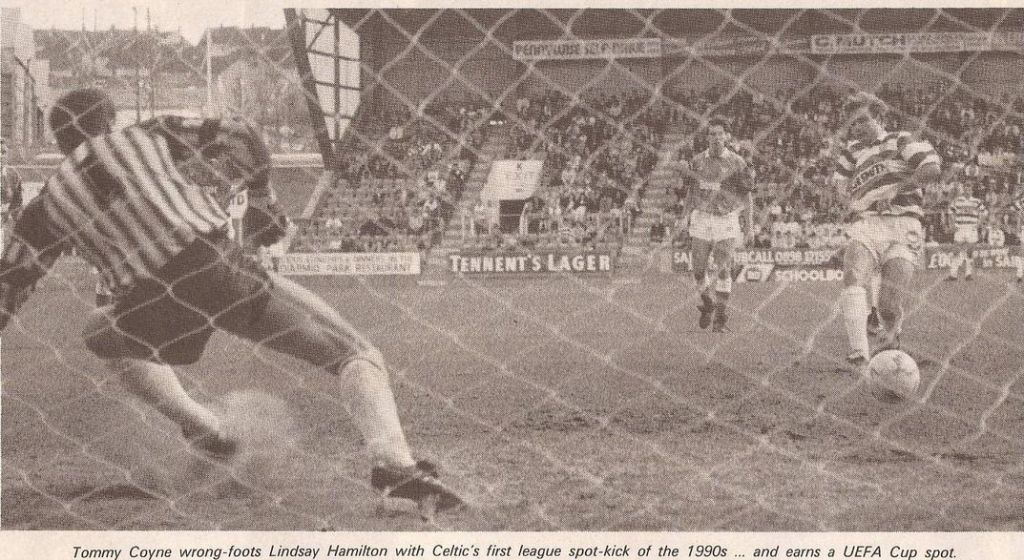 The press leak did indeed end up being true with this being Billy McNeill’s last game as manager. He was sacked a matter of days later.

Rangers also won the league after beating Aberdeen 2-0 at Ibrox. Aberdeen had only needed a point to win the title themselves but didn’t quite have enough to go to Ibrox and win. 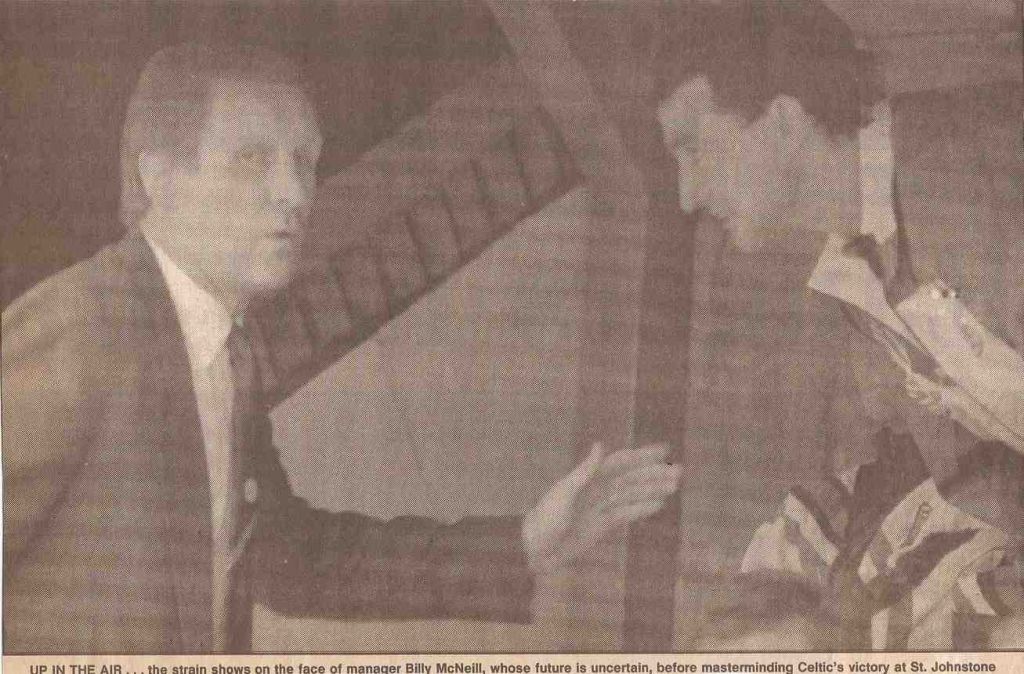 European football was assured for season 1991-92, but it was not enough to save Billy McNeill from the sack as Chief Executive Terry Cassidy became public enemy number one in the eyes of the support.

Next season would see a new man in the dugout. He’d have to hit the ground running and have financial backing from the board.

This afternoon we’ll look at season 1991-92, the players and the games that mattered under new Celtic manager Liam Brady.

Mooymania – It’s down to our manager’s judgement rather than good fortune
Mooymania: “He’s been fantastic since he came to the club,” Callum McGregor
It’s Mooymania on the Unique Angle – “Aaron, Aaron Mooy…Aaron, Aaron Mooy”
Previous ArticleCeltic’s Puzzling Son Of Donegal, Joseph McGroary
Next Article Matt Corr on the corridor between boardroom and tunnel at Celtic Park