You are at:Home»Latest»The Day The Bill Was Killed, Five Years Ago Today

The long campaign to ‘kill the bill’ was finally won on this day in 2017, and it is worth reflecting on the achievements of a united Celtic support at that time.

The story has its origins rooted in the derby match on 2 March 2011, a date that will always be known as the day when the ‘Shame Game’ took place. However, there was a football match at Celtic Park that night, which Celtic won by a goal to nil, eliminating Rangers from the Scottish Cup in the process.

The match became infamous because of a string of incidents, which saw three Rangers players sent off and both managers square up to one another at full time. A summit was called by the First Minister, Alex Salmond, in the aftermath of the contest, whilst the head of Strathclyde Police contemplated the idea of playing the fixture behind closed doors in future. Concurrent to these top-level discussions, an SFA investigation was conducted in regard to the scenes at Celtic Park.

Extraordinarily, the governing body decided to fine Bougherra and Diouf a measly £5,000 for offences ranging from manhandling the referee, to elbowing the Celtic physio. As for the Rangers Manager, Ally McCoist, he received a £2,500 fine, which was overturned on appeal. Amidst all of these misdemeanours, only Neil Lennon received a ban (four matches) for his role on the evening. QC Paul McBride subsequently commented: “The SFA are officially the laughing stock of world football.”

The lawyer went on to scathingly say: “They have been shown now to be not merely dysfunctional and not merely dishonest but biased, because McCoist, who undoubtedly said something that provoked a reaction from Neil Lennon that caused a four-match ban for him, received no punishment at all. We know that Bougherra, who manhandled the referee not once but twice doesn’t get a ban. We know that El Hadj Diouf, who’s involved in an altercation in the tunnel with a Celtic physiotherapist, refuses to leave the park when given a red card and throws his top into the crowd against Police advice, isn’t given a ban either. What is any sensible person to think of that set of affairs?” 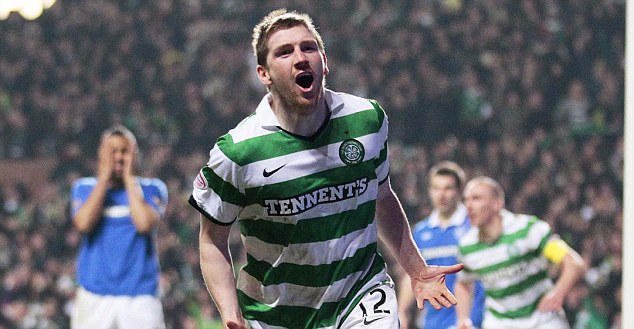 Celtic’s Wilson celebrates scoring against Rangers during the ‘shame game’

Mindboggling as the decisions of the SFA were, there was much worse to follow from the Scottish government. The outcome of discussions surrounding the affair ultimately led to the creation of a draconian piece of legislation, known as The Offensive Behaviour at Football and Threatening Communications Act, by Kenny MacAskill on 19 January 2012. This reactionary, rushed, new bill enabled police to incriminate football supporters on the subjective basis of deeming them to be acting offensively within the context of a football match.

Given that the law flew in the face of free speech, civil liberties and absolutely failed to tackle sectarianism, (its cited purpose, for which laws already existed anyway) it was hardly surprising when Fans Against Criminalisation demonstrations began to garner huge support.

Fans Against Criminalisation (FAC) had been established in 2011 when the summit had been called. The organisation comprised of five key Celtic supporter groups, The Green Brigade, The Celtic Trust, The Celtic Supporter’s Association, The Affiliation of Registered Celtic Supporters’ Clubs and The Association of Irish Celtic Supporters Clubs. Although, FAC sought to branch out to the rest of Scottish football as fans from all clubs were inadvertently affected. Therefore, fans of Motherwell, Hamilton and Rangers were all involved in the planning of some FAC activities.

Despite the fact that the campaign by FAC was a long and hard fought one, the focus of this piece is an incident that occurred during a Green Brigade protest march in 2013. The ultras group had already staged a number of protests through banners, displays and sit down/silent demonstrations. However, their efforts were redoubled in accordance with FAC, when a spokesman for the group released the following statement just a week after Celtic beat Barcelona in November 2012:

“Last Wednesday was a special night at Celtic Park. The display before the match was beyond our wildest expectations, the atmosphere was electric from start to finish and more importantly, Celtic beat arguably the best team in world football. It is a night that will live long in the memory of everyone connected to the club. However, while the rest of the support were still on cloud nine, our group was brought back down to earth with a bump as it transpired that Strathclyde Police had visited yet another two members’ homes with a view to charging them.

To put this into perspective, this means that just under 50% of the Green Brigade have either faced or are facing police charges/a ban from football.” After revealing that shocking statistic, the statement continued: “It has come to a stage where we have to act and fight back. We can’t continue to let the police have free reign to arrest and charge whoever they please. It is having an astronomical effect on people’s livelihoods.

Those members who are left without a charge can’t even enjoy the football anymore in case it leads to a chap at the door that could change their lives forever. The grim reality is that if we don’t act now, there may be no group left come the end of the season. As a result, we have no choice but to highlight this further in the form of a two-match boycott from Celtic Park.

This will begin immediately and means that during the forthcoming league match v Inverness Caledonian Thistle and Scottish Cup match v Arbroath, The Green Brigade will not be present whatsoever. Our members live for going to watch and support the team we love, just like every other fan out there. Sadly, we aren’t being treated like every other fan and in fact face victimisation and harassment on a scale that is unimaginable. We hope that this boycott will raise awareness of our situation and the end result will be that Strathclyde Police will relent.” 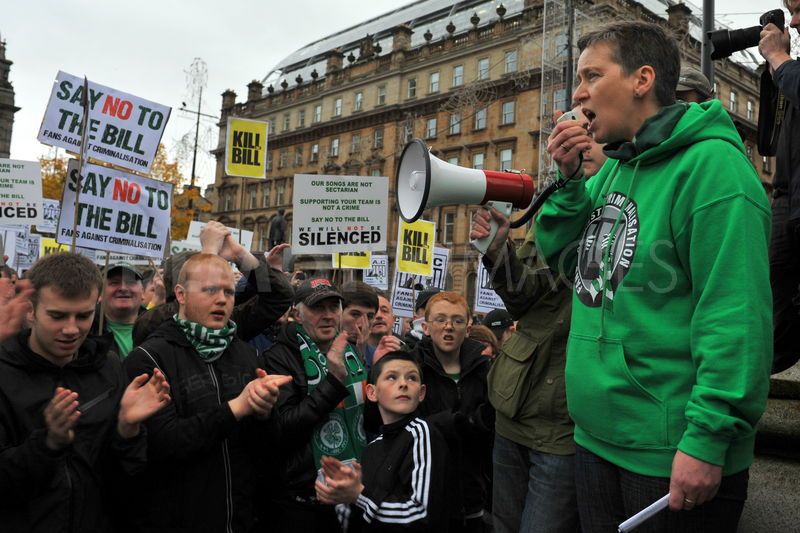 The boycott was supported by all season book holders in section 111 (the area where the Green Brigade stood) both within and outside of the group. The matches saw possibly the worst two atmospheres of the season. Still the situation did not improve. After becoming sick of being filmed throughout every match, some members of The Green Brigade spontaneously decided to return the favour and flash their phone cameras back at the police. More joined in. Amazingly, the full stadium was awash with flashing camera lights and a chant of “All Celtic fans against the bill.”

In contempt of the creative efforts, little improved by way of incrimination within section 111. Having worked with wider Scottish football fans through FAC, The Green Brigade publicised their ongoing plight with their own protest march, in March 2013. Joined by a healthy number of supporters, marchers gathered at Crystal Bells pub and then headed further along the Gallowgate in a peaceful manner en route to Celtic Park.

Suddenly things turned ugly. Around 200 police officers were deployed to the scene to prevent the march from going ahead. The walk was technically illegal as it had not been applied for, but the response of the police was viewed by many as disproportionate.

Peaceful protesters were kettled beneath a railway bridge a few hundred yards from Glasgow Cross, which prompted a chant of “Supporting your team is not a crime.” Amid a very tense atmosphere, people began to stray from the area as there was a feeling of intimidation. Yet it was then that the scene worsened. Supporters as young as 15, walking away from the crowd, were slammed to the ground and handcuffed. Men and women were struck with batons and most haunting of all, a little girl stood crying, terrified as she looked to her horror at the mayhem before her eyes.

A lot of Celtic supporters caught the violence on camera, which led to international outcry from certain media outlets and showed thousands of people what the group had endured that day, through the medium of Youtube.

Following the incident, the campaign went from strength to strength. A month later, FAC held a demonstration at George Square in Glasgow, which drew huge numbers from supporters of many clubs. Jeanette Findlay, Joe O’Rourke and a strong presence from The Green Brigade gave a voice to the voiceless. It was clear – criminalisation of the Celtic support and of any other support in the country, would no longer be tolerated.

There would be innumerable challenges ahead for FAC, but their hard work ultimately paid off when Labour MSP, James Kelly, introduced The Offensive Behaviour at Football and Threatening Communications Repeal Bill on 21 June 2017. Kelly had described the 2012 legislation as having “Completely failed to tackle sectarianism,” and as “Illiberal,” which “Unfairly targets football fans.”

The politician also reported that the legislation had been “Condemned by legal experts, human rights organisations and equality groups.” Professor Sir Tom Devine was one such man, who previously spoke of the Act as “The most illiberal and counterproductive act passed by our young Parliament to date,” and described it as a “Stain on the reputation of the Scottish legal system for fair dealing.”

After passing the first stage of repeal on 25 January 2018 and the second stage on 27 February, the Scottish Parliament broke the news on 15 March 2018, that the act would be repealed. Royal Assent was secured, confirming the motion on 19 April. The end of the Act was a cause of great celebration for many Scottish football fans, Fans Against Criminalisation and Celtic Football Club themselves.

A day I’ll never forget – today I got to meet Jota, Celtic’s superstar from Portugal
Michael Nicolson’s challenge that needs solutions found
A quick little left-back. He’s not going to defend like Danny McGrain, that’s not his game’
Previous Article£15m touted as the magic number for Celtic star as transfer looks unlikely
Next Article Three Scottish destinations for Celtic outcast as new signing could force him out