You are at:Home»Latest»The last time Carlo Ancelotti brought the European Champions to Paradise

Carlo Ancelotti returns to Celtic Park this evening with his Real Madrid side to face the Scottish Champions. However, it is not the first time that the Italian manager has brought the reigning European Champions to Paradise.

Back in 2007, Ancelotti brought his AC Milan team to Celtic Park in early October 2007. The previous season, Milan had broken Celtic hearts with a late extra-time winner from Kaka at the San Siro in the Last 16 second leg. Ancelotti’s Milan inevitably went on to win the Champions League in Athens that year by beating Liverpool 2-1 in Athens.

However, it would be Celtic’s day thanks to goals from Stephen McManus and Scott McDonald as Gordon Strachan’s side took a step towards qualification for the next round with a famous win. Strachan’s Celtic teams were often pragmatic and robust, on this occasion they controlled the game for an hour, allowing Milan to have the ball and limiting their chances. After 62 minutes, the skipper ‘Big Mick’ got the goal bundling in from a corner.

Unfortunately, the lead under the treacherous Glasgow was short-lived as Lee Naylor was adjudged to have held Massimo Ambrosini. The Italian looked for it but Naylor gave the referee a decision to make which in turn allowed Kaka to equalise from the spot.

Celtic sensed that Milan were there in the dying stages of the game and pushed up the park. Gary Caldwell skirted a shot off the Parkhead surface towards the right corner of the goal only for Dida to dive down and parry it back into the oncoming McDonald, who made no mistake.

Celtic fans will hope that they can replicate the famous win over Ancelotti’s team again in the shape of the Spanish giants. Don Carlo is recognised as one of the best ever managers in football and the esteem in which he holds the club is admirable. Although, as Ange says, we want him to be saying that after the game and after we have taken a victory from them. 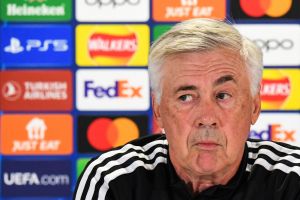 In the 2008/09 Champions League, Celtic were once again drawn against the holders as Manchester United arrived in Glasgow’s East End. Sir Alex Ferguson watched as his side battled for a point.

Previous ArticleGlamour Night in Paradise – A Celtic win would reverberate around World football
Next Article Celtic v Real Madrid: “Celtic are good enough to give them a bloody nose,” Charlie Nicholas