You are at:Home»Latest»The time is right for Larsson’s Celtic return

HENRIK LARSSON has spoken about his desire to return to management and as Damien Duff departs Celtic, the time could be right for the legend to return to Celtic.

The ‘King of Kings’ admitted that he would consider a role in Scotland as he looks to find a return to the game since leaving Helsingborgs last August. Following Duff’s departure as first team coach, there is an opening in the Celtic dugout and Henrik could be the man to help the club deliver 10IAR.

Back in April, Larsson told the Scottish Sun that he owes the career he had in Glasgow to becoming one of Europe’s top players. The 48-year-old has admitted that he would ‘love’ a job back in Scotland.

“I’d love to go back and, because of the language, it would be much easier than going to France as I don’t speak much French.

“I came to Scotland after a tough time in Feyenoord. I did OK in Holland but it really fell into place when I came to Celtic. That’s where I became the player I was known for. Celtic is where I made my name and I developed into the finished article.

“My greatest achievement is winning the Champions League at Barcelona, but I can never look away from my seven years in Glasgow as that made me the player I was in Barcelona.” 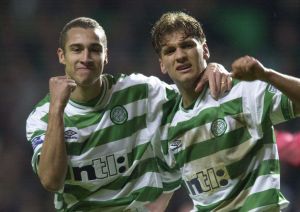 Larsson scored 242 goals for Celtic over seven seasons in the Hoops and whilst the managerial role at Celtic Park is occupied by his former teammate, Neil Lennon, there is be an opening on his coaching staff.

Speaking to Chris Sutton in last night’s UCL nights special of Celtic’s European history, Larsson said he had been offered the manager’s job but the ‘time wasn’t right’ and that he ‘would love a return’.

Damien Duff was appointed as one of Stephen Kenny’s assistant managers for Ireland and Neil Lennon has confirmed that he will leave the club next month. 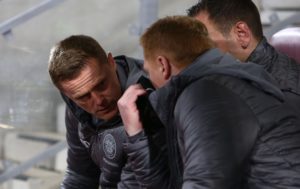 Duff is highly rated in Dublin and in Glasgow and his departure could be a huge loss in terms of a coach with a winning mentality leaving the club in a vital season. Celtic could use with someone who understands the club and can help continue a legacy of success.

These supporters seem to be onside with the prospect of Larsson returning.

Watching this Celtic European nights on BT sport and henrik larsson has just said he was offered the Celtic job. Imagine that man🍀 the king back at paradise 👑

Johan Mjallby and Henrik Larsson about to make a return to Celtic? Hmmm..

Larsson may be after a managerial role but a role in the coaching staff at Celtic could boost his profile in England as well as giving a huge boost to the club.

Larsson was one of the men that helped stop the ten back in 1998 and it would be fitting if he were there at the end of Celtic’s 10IAR.

The Swede would be another selling point for supporters looking to renew knowing that one of the club’s greatest ever players is returning as the club push for a record ten-in-a-row.