Dunfermline Athletic may have lost Jock Stein in the spring of 1964 but that summer they bolstered their attacking options by clinching the signing of striker Alex Ferguson from St Johnstone. It was a move which triggered the most prolific spell of the Govan-born forward’s career and pushed the Pars into contention for domestic and continental honours. 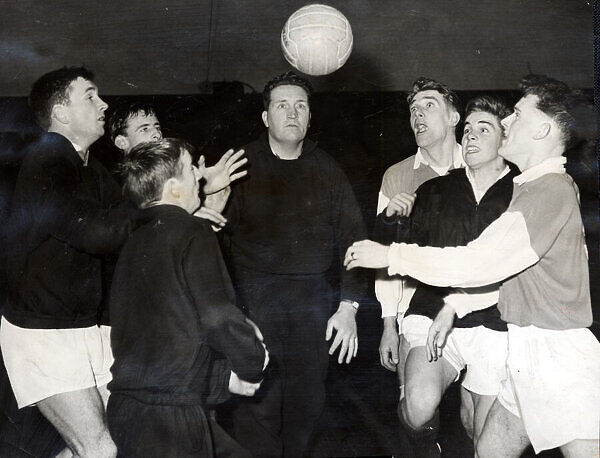 Football being football, of course Dunfermline were joined in their League Cup section by Hibernian and their new manager Jock Stein, as well as Third Lanark – now managed by Stein’s former teammate Bobby Evans – and Airdrieonians. It was at Broomfield that Tommy – playing at right-half – and Fergie opened the campaign with a 4-1 win, the new striker on the scoresheet.

And four nights later no doubt there were smug faces in the East End Park boardroom as the Pars beat Jock’s new club 2-0 to continue their perfect start, with Ferguson again on target. Hibernian goalkeeper Ronnie Simpson remained on the sidelines at this stage, prompting the 33-year-old to state that he was now contemplating retirement. That aged well, Faither! He duly signed for Celtic a few weeks later and the rest is pretty magical football history. 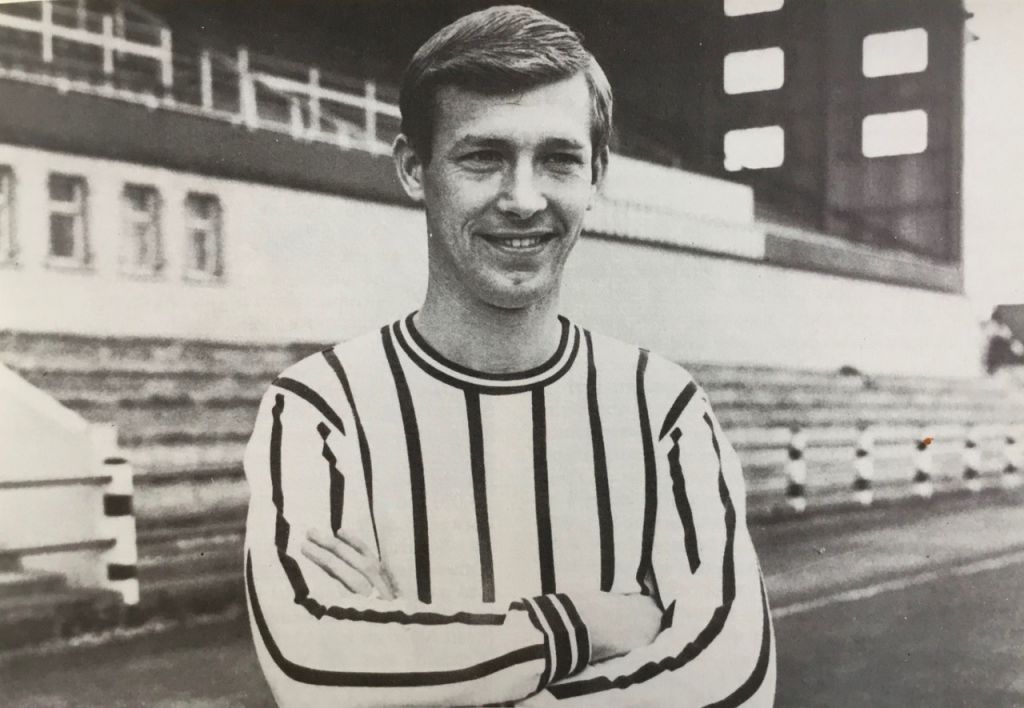 A comfortable home victory over Third Lanark set the Fifers up for a daunting opening League game at Ibrox against Treble-holders Rangers – captained by another player from the ancient kingdom, Jim Baxter – on Wednesday, 19 August 1964, but the Pars would return home with a very creditable point after a goalless draw. Dunfermline duly completed the return League Cup fixtures with minimal fuss, a 1-1 at Easter Road the only point dropped as they topped the section two points ahead of Jock Stein’s Hibernian.

Tommy was an ever-present in his new number four role as the Pars sealed qualification with a 1-0 win at Cathkin over a Thirds team featuring three former Celts, goalkeeper Frank Connor, inside-forward Mike Jackson and player-manager Evans. The Fifers’ reward was a quarter-final tie against cup-holders Rangers, a 3-0 home defeat on Monday, 14 September effectively ending their interest in the competition despite the battling 2-2 draw secured in the return played at Ibrox 48 hours later, with Tommy missing from the Pars line-up in Govan that night for the first time that season. 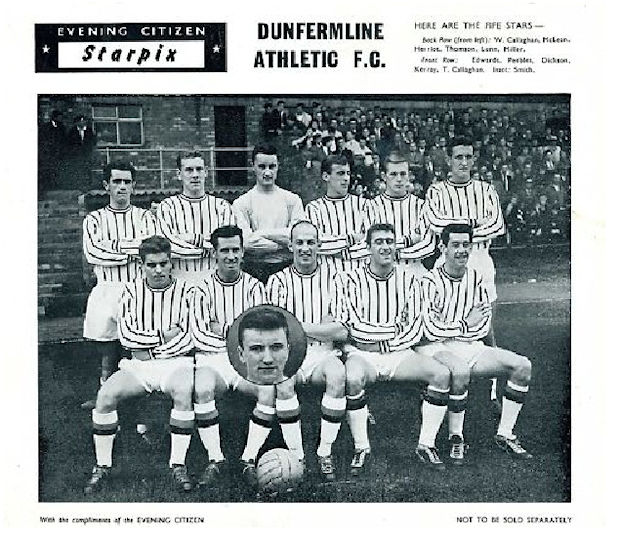 In the interim, Dunfermline had opened their home League campaign with a 5-1 mauling of Falkirk, Harry Melrose helping himself to all five of the Pars’ goals with future Celt Hugh Maxwell grabbing a late consolation for the Bairns. Another excellent away draw followed at Tynecastle, where Willie Wallace set up Hearts’ opener and both Tommy and Fergie were warned by referee Willie Syme following a challenge on Tommy Traynor.

That match fell ahead of the two midweek League Cup ties with Rangers, with Tommy still absent from the Pars team which routed Harry Hood’s promoted Clyde 7-2 at East End Park two days later. Tommy returned to the side for the visit to League leaders Kilmarnock the following Saturday, the Rugby Park team on a high after their 5-1 thrashing of Eintracht Frankfurt in midweek. Killie would complete a successful week with a 1-0 victory which maintained their perfect opening to the season whilst ending Dunfermline’s unbeaten League record for the campaign.

The Pars opened October with a 3-0 home win over a Motherwell side which featured Tommy’s later close friend and Bishopbriggs neighbour Joe McBride, but that was followed by a 2-0 defeat at Cappielow to high-flying Morton, the Second Division champions from the spring still unbeaten in their return to the top-flight and introducing a teenage Joe Harper.

Attention then turned from domestic to European football, Dunfermline paired with Swedish outfit Orgryte in the first round of the Inter-Cities Fairs Cup, a first such continental experience for Tommy having missed out on Dunfermline’s epic ties against Ujpest Dozsa, Everton and Valencia under Jock Stein.

Orgryte was established in Gothenburg just a few weeks after Celtic in December 1887 and is the oldest football club in Sweden. In October 1964 they were in the closing stages of a titanic contest with Djurgardens and Malmo for the Swedish Allsvenskan title, a race which would end with all three clubs finishing level on points, with Djurgardens winning by a single goal.

Orgryte’s star player was Agne Simonsson, the Swedish international striker whose four goals in the home World Cup finals of 1958 – including one in the final itself against Pele’s Brazil – had earned him a move to European champions Real Madrid in 1960. 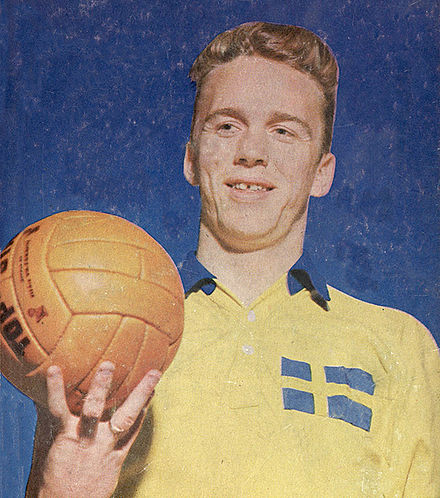 Having struggled to displace the likes of Ferenc Puskas and Alfredo Di Stefano at the Santiago Bernabeu, Agne was enjoying a second spell at his hometown club. The Swedes also featured two players who would make their name in Scottish football, wing-half (appropriately enough) Lennart Wing and winger Orjan Persson. Both would sign within months for Dundee United and would become the first players to be capped at international level whilst at Tannadice.

Persson would later move to Ibrox and it was he who struck first at East End Park on Tuesday, 13 October 1964 to give the Swedes the lead. John McLaughlin equalised immediately but Agne Simonsson then restored Orgryte’s advantage and it took a massive effort for the Pars to fight back and eventually come out on top by four goals to two. 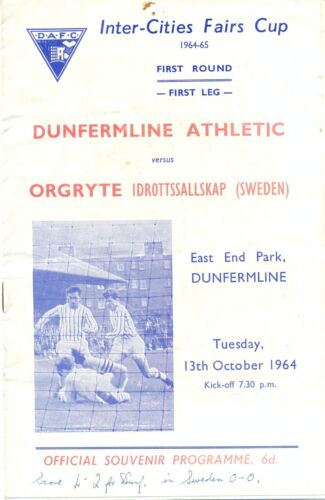 Tommy had sat out the European win and he was again on the sidelines as the Fifers emerged from Broomfield with two excellent points four days later having edged a seven-goal thriller with Airdrieonians. And he would have to wait a bit longer for his continental debut after a strong defensive performance from Dunfermline secured a goalless draw in the Ullevi in midweek, a match watched by Dundee United manager Jerry Kerr whose apparent target was none other than Agne Simonsson.

The Pars continued their excellent domestic form by closing the month with successive 2-0 home wins over Aberdeen and Partick Thistle, results which kept them in fourth spot in the table, behind Kilmarnock, Hearts and Jock Stein’s Hibernian. Tommy finally made his return to the first team for the visit of the Jags, this time at left-half. 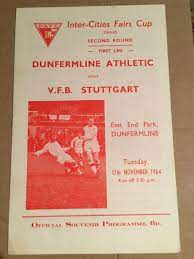 November opened for Dunfermline with two tricky trips to Dundee, another future Celt Steve Murray involved in the opening goal of the Dark Blues’ 3-1 win at Dens Park, whilst two long-range efforts from Stewart Fraser gave Dundee United a 2-0 victory seven days later. Tommy had missed out at Tannadice, but he would play a starring role in the Fifers’ 1-0 victory over West Germans VfB Stuttgart at East End Park on Tuesday, 17 November 1964. 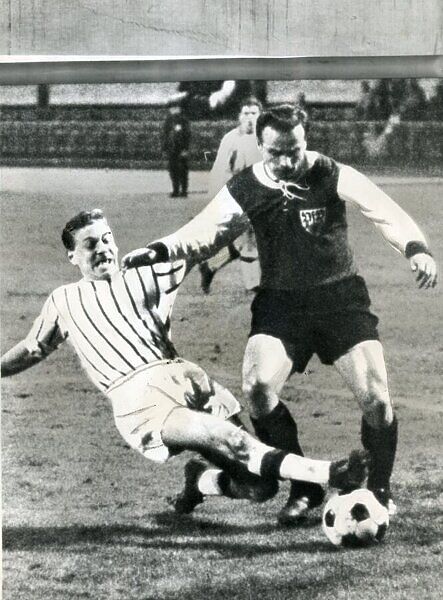 The 19-year-old wing-half was described as “outstanding” in The Evening Times match report the following evening and it was his low 20-yard strike past Gunter Sawitzki in the 71st minute which gave the Pars a lead to take to Bavaria. The German international goalkeeper had saved a George Peebles penalty 10 minutes earlier. Incidentally, the following night would see Ronnie Simpson make his Celtic debut against Barcelona in the Camp Nou in the same competition, Jimmy McGrory’s men going down 3-1 to the Catalan giants. 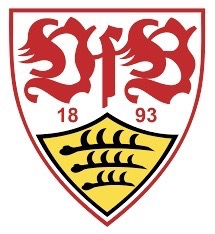 The domestic action continued that weekend with a third clash of the season between Jock Stein’s former and current clubs, Dunfermline maintaining their unbeaten record in the series with a 1-0 win at East End Park to close the gap on the third-placed Edinburgh side.

And the month ended with another impressive victory, the Pars coming from a goal down to St Mirren at Love Street to run out convincing 4-1 winners, setting themselves up nicely for the midweek return leg in Germany.

Tommy had suffered an injury in Paisley but was declared fit for the match in Stuttgart. VfB had finished joint fourth in the inaugural Bundesliga and were confident of progressing at the the Fifers’ expense. Nevertheless, Dunfermline manager Willie Cunningham was in upbeat mood beforehand. 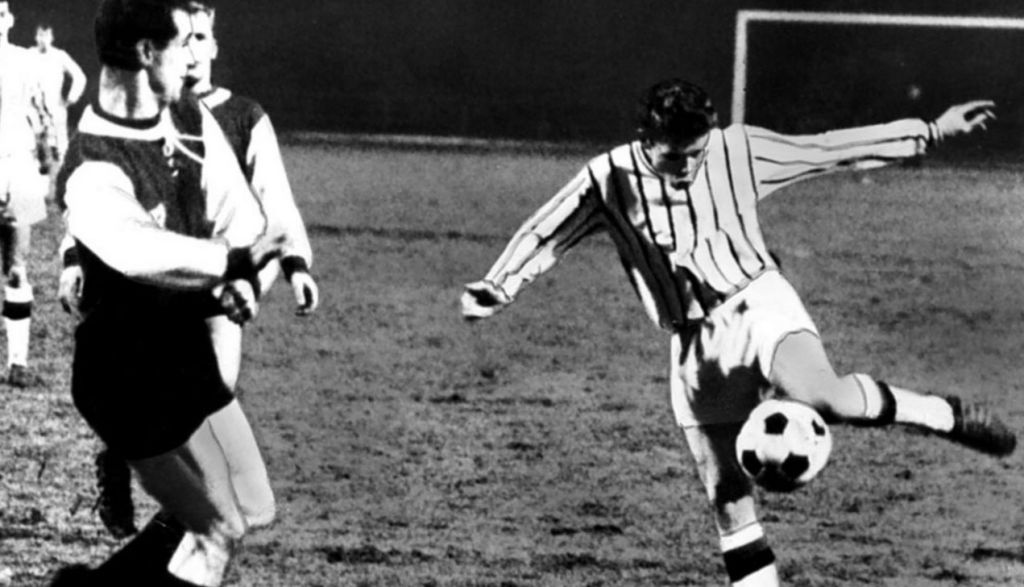 “I agree that that we might have had a three-goal lead in the first leg, but we know what the Germans can do, and even though they’re bolstered by three players who missed the first game, we have their measure.”

Goalkeeper Jim Herriot had also shrugged off an injury from the weekend to take his place between the sticks and he would prove to be the hero on the night, saving a late penalty kick from Erwin Waldner – another West German veteran of the 1958 World Cup – to ensure the Pars passage into the next round with a second consecutive 0-0 draw on the continent. The Fifers would now face either Beerschot of Belgium or Spain’s Athletic Bilbao in the last 16. 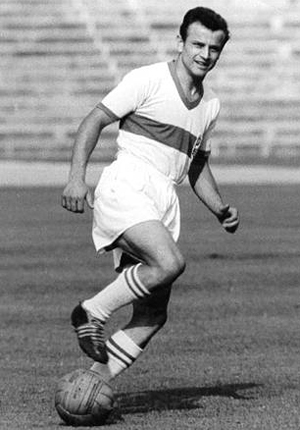 Dunfermline’s scheduled home clash with Third Lanark on Saturday, 5 December 1964 was one of four top-flight matches which fell victim to the thick fog which covered much of central Scotland.

Incidentally Bobby Evans was manager of Third Lanark that season.

That meant Tommy had a free weekend to celebrate the end of his teens, the big midfielder turning 20 the following day. The next Saturday saw the Pars continue their title challenge with a fine 3-1 win over St Johnstone at Muirton Park. As it turned out, their final task of 1964 was a visit to Celtic Park on Saturday, 19 December. At kick-off, Dunfermline were in fourth place in the table, ahead of Jimmy McGrory’s Celtic only on goal average after 15 games, as the following teams lined up. 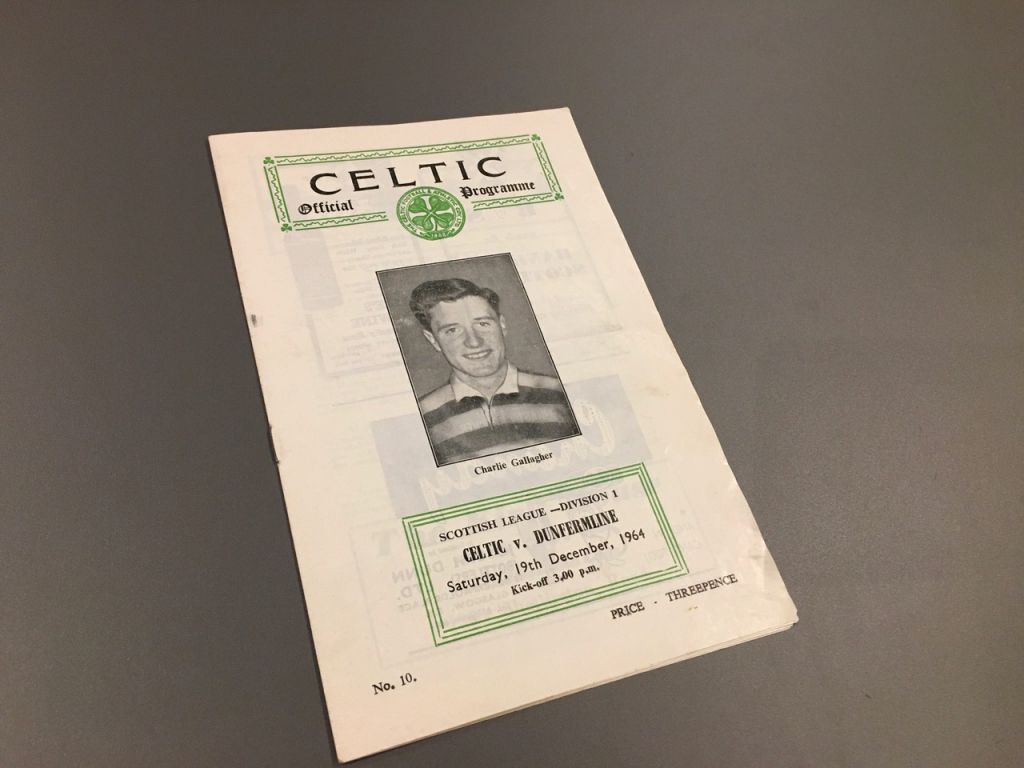 The visitors were first out of the blocks in this vital match, Jackie Sinclair giving them the lead after just three minutes. But Celtic roared back, with Jimmy Johnstone and John Hughes to the fore, despite a setback when Tommy Gemmell was hurt in a challenge and forced to play out on the wing in these pre-substitute days.

Celtic’s equaliser arrived five minutes from the break, Johnstone’s corner-kick headed past Jim Herriot by Charlie Gallagher. The second half followed a similar pattern, with Celtic forcing the play but the Pars looking dangerous on the break, Alex Edwards unfortunate to see his header crash back off the crossbar with Ronnie Simpson beaten. The winning goal came just eight minutes from time, and was a sickening blow for Celtic’s title aspirations, Dunfermline’s top goalscorer Alex Ferguson in the right place to turn the ball home from close range following a free-kick. 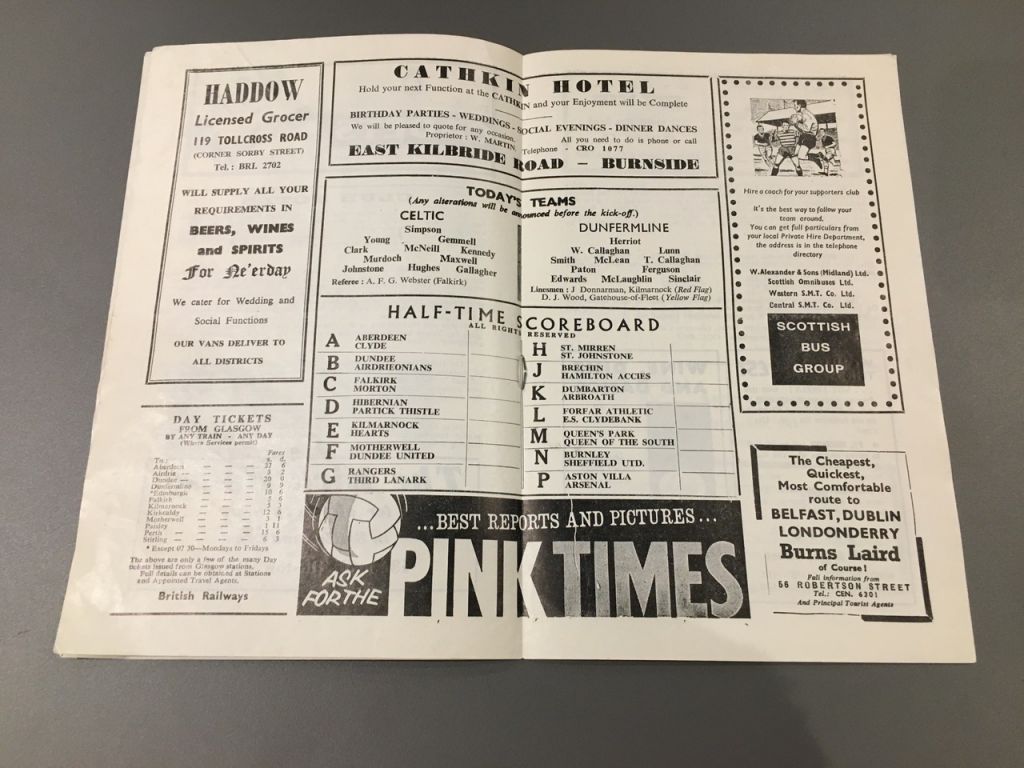 Heavy snow cancelled the scheduled Boxing Day clash with Rangers at East End Park, Celtic’s 2-0 home win over Motherwell allowing them to join the Pars on 22 points, albeit now having played a game more. The pacesetters at the halfway stage were Hearts and Kilmarnock, locked together at the summit on 30 points from 18 games.

Behind them in third were Jock Stein’s Hibernian on 26 points having played one game less with Dunfermline and Celtic making up the top five. Defending champions Rangers were in sixth place and would present the only realistic threat to that pack.

But as 1964 morphed into 1965, the times they were a-changing behind the scenes with an impact which would transform the fortunes of one of those six clubs forever. The remaining four months of that campaign would see the top clubs battle for that precious League title until the final seconds, with the most incredible outcome.

And in the east end of Glasgow, a long-time sleeping giant was about to rise with life-changing implications for Tommy Callaghan.

But that’s all in the future.

Giakoumakis update concludes Celtic’s long running transfer saga
Giakoumakis to Atlanta United is a £4.3m ‘Done Deal’ reports Fabrizio Romano
Video: What Ange Postecoglou said to the Celtic Board
Previous ArticleCallum McGregor returns as Celtic lose 4-3 to Rennes in Portugal
Next Article “It’s good to be back on the pitch,” Callum McGregor’s ready for Pittodrie