You are at:Home»Latest»The Valencia file (Part 5) – Celtic face another Magyar legend in Zurich

The Valencia file continues with Part 5 – Celts face another Magyar legend in Zurich but Big Tam’s the Man!…

As Mundo’s Valencia prepared for their sixth successive assault on the Inter Cities Fairs Cup, there was a mouth-watering new prospect ahead for Jock Stein’s young Celts and their legions of supporters.

The European Cup of 1966/67 featured the champions of thirty-three countries across the continent. Most of the big names were in there; holders and six-time winners, Real Madrid, Herrera’s Inter Milan, European and World Champions in both ’64 and ’65, Shankly’s Liverpool, Euro conquerors of Celtic just months earlier, and Spanish champions, Atletico Madrid.

The Eastern European powerhouses, Hungary, Czechoslovakia, Yugoslavia and, for the first time, the Soviet Union, were also represented. One notable absentee was Benfica. The Lisbon side, twice European champions and with four final appearances already under their belt, had surprisingly lost the domestic title by a point to their city rivals, Sporting Club. It was a rare blimp for the famous Eagles, with eight titles in the 60’s and boasting players such as Eusebio, Coluna and Torres, very much the dominant force in Portuguese football.

Irish champions, Waterford, were also taking part for the first time, having won their maiden domestic title. They shipped twelve goals to East German army side, Vorwarts Berlin, to exit at the preliminary stage, together with Malta’s Sliema Wanderers. Both of the sides eliminated would be Euro opponents for Jock’s Celtic in the early seventies. 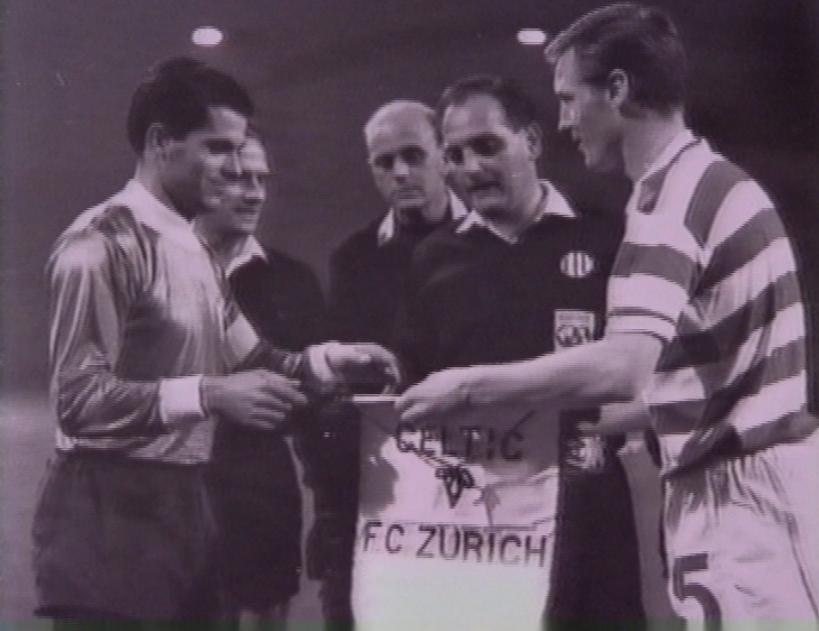 First up for Celts was Swiss side, FC Zurich. They were enjoying a golden period, fresh from a first-ever domestic double. They had also reached the last four of the ‘Big Cup’ just three years earlier, beating Dundalk, Galatasaray and PSV Eindhoven, before feeling the power of Real Madrid, a narrow home defeat followed by a 6-0 rout in the Bernabeu, the same fate which befell Rangers in the first round.

Their visit to Celtic Park, in September 1966, was a physical, acrimonious affair, 48,000 fans frustrated for an hour, before a ridiculous effort from Tommy Gemmell, from fully 30 yards, crashed off the underside of the bar and into the net for Celtic’s first European Cup goal.

Ten minutes later, McBride added another with a fine left-foot shot from the edge of the box. Celts were then denied a third goal by a bizarre refereeing decision, the Danish whistler blowing for full-time as McBride’s header crossed the line, despite umpteen warnings that Zurich’s blatant time-wasting tactics would be penalised by the playing of additional minutes. 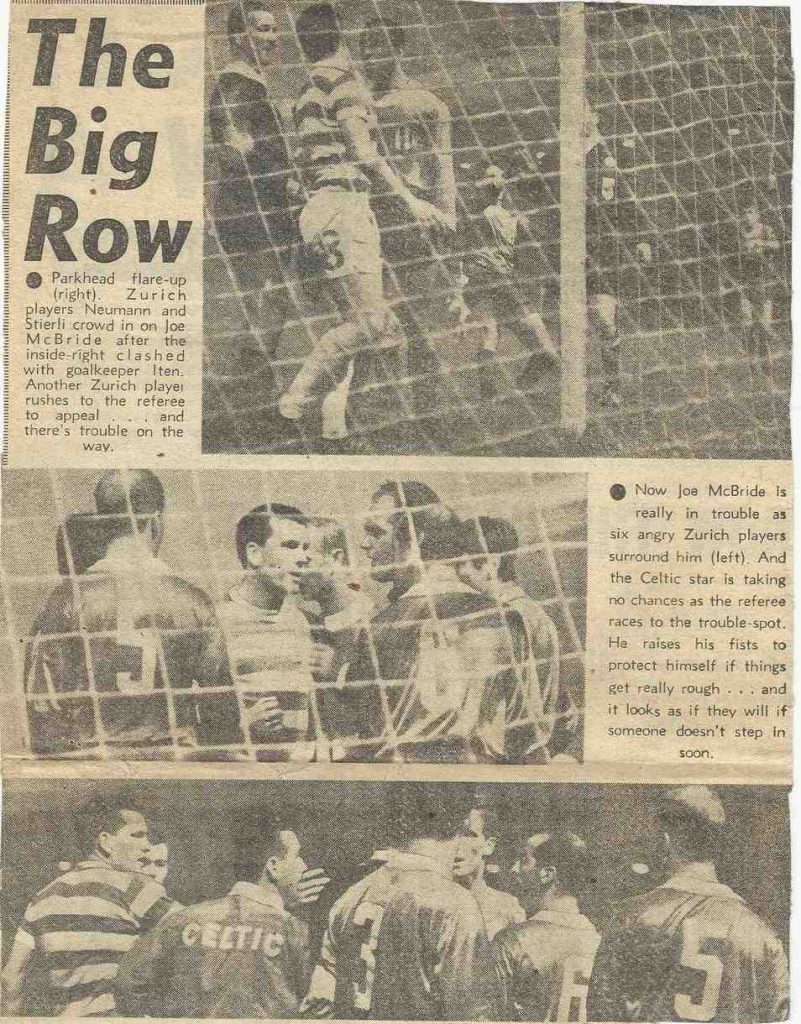 Curiously, for something which happens so rarely in football, Clive Thomas in a Brazil World Cup game in the ‘70s being the only example which immediately springs to mind, Celts had actually benefitted from the same thing in their first-ever home European game, Haffey beaten by a Valencia strike then relieved to see that the half-time whistle had blown a split-second earlier.

Two weeks later, Jock Stein celebrated his 44th birthday by watching his young charges attempt to defend or extend their lead in the Letzigrund. In the opposition line-up that night, was the Zurich coach Laszlo Kubala, injuries to his key players forcing him to make the final European Cup appearance of a glorious career, at the grand young age of 39. 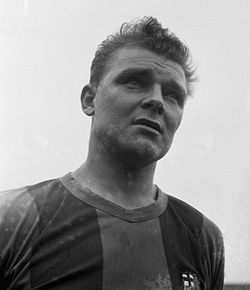 His is a real ‘Roy of the Rovers’ story. Budapest-born, he was a team-mate of Kocsis at Ferencvaros in the 1940’s, before fleeing first to Czechoslovakia then Italy. Whilst in Turin, in 1949, he was due to play for Torino against Benfica in Lisbon, fatefully pulling out because of a family illness. On the return flight home, the aircraft carrying the team crashed, killing everyone on board, including the father of Sandro Mazzola, of whom we will speak later.

His team-mates in the 1960 Fairs Cup triumph included fellow Hungarian-refugees, Czibor and Kocsis, both of whom he had been influential in attracting to Barca, and two Spaniards, Ballon d’Or winner, Luis Suarez and winger, Lluis Coll.

Kocsis had controlled the match for the Catalans at Celtic Park in December 1964, whilst Coll’s goals in the Mestalla, two years earlier, were the first-ever conceded by the Bhoys in Europe. And Suarez, Herrera and Mazzola would all feature in the Celtic story before the 1966/67 season was over. Football can be a very small world, sometimes.

Back in the spring of 1960, Barcelona, uniquely, had reached the final stages of both European and Fairs Cups. The last four of the Champions competition pitched them with holders and fierce rivals, Real Madrid, both legs scheduled to take place between the corresponding Fairs Cup Final ties with Birmingham City.

Kubala had fallen out of favour under Herrera around this time and had been dropped from the team for the Madrid games, much to the consternation of the support, by whom he was idolised. When Barcelona failed to overcome a 3-1 deficit from the Bernabeu, losing by the same score at the Camp Nou, Herrera paid with his job, replaced by Enric Rabassa and Kubala restored, as Barca comfortably saw off the English side to retain the Fairs Cup, whilst Real thrilled Hampden and the world with a stunning 7-3 victory over Eintracht Frankfurt, to lift a fifth successive European Cup.

The two Spanish giants would clash again just six months later, in the First Round of the following season’s major tournament. This time, Kubala’s Barca came out on top, by the odd goal in seven, going all the way to the Berne Final, before succumbing to Benfica.

It was the last hurrah for that great side, as Kubala moved into a coaching role at the Camp Nou and Suarez broke the world transfer record and Catalan hearts, following Herrera to Inter Milan.

Laszlo then had a brief spell as Barcelona manager, before teaming up with Alfredo di Stefano as a player/coach at neighbours Espanyol. Before leaving Spain, he completed what must be the only international appearance record of its kind, playing for Hungary, Czechoslovakia, Spain, Catalonia and Europe. As Barcelona celebrated their centenary in 1999, supporters of the club of Cruyff and a hundred other superstars, voted Kubala the greatest-ever player to wear the famous shirt.

That should put all of the necessary perspective around his career.

In July 1966, he moved to Switzerland for one final season at top-flight level, combining his playing and coaching duties as before, this time with FC Zurich, replacing the double-winning Louis Maurer.

By now in his fortieth year, Kubala would make only twelve competitive starts for Zurich, the highest-profile being the return leg against Celtic, his side trying to recover the two-goal deficit from Glasgow.

By comparison to the game at Celtic Park, this was a civilised occasion. The hosts started well, before Tommy Gemmell proved his goal that night was no fluke, repeating it with another long-range shot on twenty minutes. The tie effectively over, Celtic and the 20,000 crowd relaxed, Chalmers scoring a typical second before the interval. ‘Big Tam’ then added a third from the spot early in the second-half, the tie played out in exhibition style, to the extent where the home support was cheering the Bhoys in green. 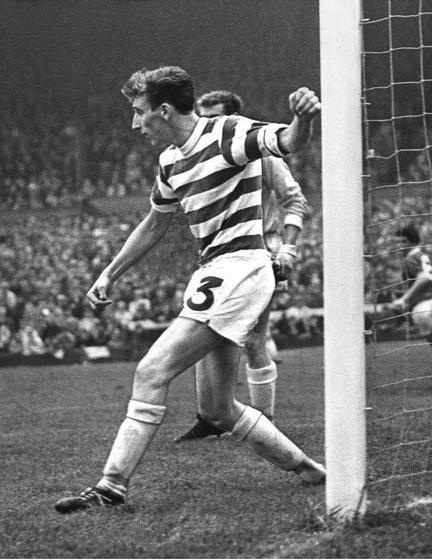 With three goals in his first two European Cup ties, Tommy Gemmell was making his mark on the football world. There were early comparisons with the greatest attacking full-back of that era, the immaculate Giacinto Facchetti of Inter Milan. One could only speculate as to what might happen if these two powerful forces of nature ever met on the same football field.

But thankfully not for long.

Safely over the first hurdle on a 5-0 aggregate, the Celtic players awaited their fate in the next round. The other First Round ties had mainly gone to form, with major talking points being Sporting Lisbon’s 7-0 defeat by Hungary’s Vasas and the requirement of a third match in Brussels before Liverpool could see off Petrolul Ploiesti of Romania, highlighting again the strength of Eastern Europe at that time.

But who would be next for Jock’s Celtic?

Thanks as always to the folk behind the Celtic Wiki on Kerrydale St., a fabulous source of information for these stories.

THE VALENCIA FILE – Parts 1-4 are below…