You are at:Home»Latest»‘There’s no doubt Griffiths will bounce back’, John Barnes back striker’s return

JOHN BARNES has branded Leigh Griffiths’ fitness issues as being ‘disrespectful and unprofessional’ in an interview with the Scottish Herald but he has backed him to come back and prove his worth to the 10-in-a-row chasers. The former Celtic manager and Liverpool midfielder believes that Griffiths’ brilliance has been missed as a result of returning unfit. Although Barnes believes that Griffiths will bounce back and he won’t let it affect his season.

“At the end of the day Leigh Griffiths is a great player and I don’t think his weight gain during lockdown will haunt him for too much longer. However, it should be said that in this day and age, it’s not ok to return overweight after a break – it’s disrespectful and unprofessional; but even more so due to the circumstances of the lockdown break.”

Griffiths is expected to return to the fold after missing Celtic’s pre-season trip to France. The 29-year-old arrived back at pre=season training overweight sparking an outburst from Neil Lennon. Barnes sympathises with Lennon’s frustrations at Griffiths, accepting that it wouldn’t be accepted in his day and shouldn’t be accepted now. 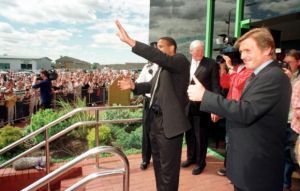 Barnes is unveiled as Celtic boss

“Players were given individual training programmes at home so there’s really no reason what so ever to return to training unfit. Those days are well and truly over. As the manager, I’d be very disappointed and feel let down.

“Back in my days, we all came back overweight because that is the way football worked; it was accepted and the coaches knew you were going to do it. But in modern football, it really shouldn’t happen anymore.

“Lennon knew he had to make a stand and make a point of discipline by leaving Griffiths behind. But there’s no doubt Griffiths will bounce back.

“And it’s important to remember that managers have always fallen out with players over lots of different things but very few of them have held it against them for forever…unless you do something really stupid. But weight gain isn’t one of them.”

Lennon has been patient with Griffiths and managed to get him back to his best at the turn of the year. The last competitive match of the 2019/20 season resulted in a 5-0 win, courtesy of a hat-trick from Griffiths.

With 115 goals in 231 appearances for Celtic, Griffiths can still be a huge part of potentially record-breaking season. He needs to get himself fit and prove that he is worthy of a place in the side with Klimala and Bayo pushing for his place. The test on Sunday versus Ross County could allow him to redeem himself in the eyes of his teammates, the management and the supporters.

Previous ArticleVideo: All of Henrik Larsson’s 242 Celtic goals
Next Article It’s been 141 days since Celtic last played in Paradise, but today, The Bhoys are Back in Town