You are at:Home»Latest»‘They are at the wrong club,’ says Gerrard. 276 creditors, Statement from Celtic Supporters, Last Word from Griffiths

STEPHEN GERRARD told his players today that THEY ARE AT THE WRONG CLUB! The headline on Sky Sports reads “Steven Gerrard says Celtic Park is not a lion’s den ahead of Old Firm.”

They all love using that “Old Firm’ tag for the Glasgow Derby – a term that Celtic have NEVER used since the liquidation of their former Old Firm partners, Rangers FC, in 2012. So Gerrard is 100% correct, his players ‘are at the wrong club’ because whoever they are they certainly are NOT Rangers!

Of course wasn’t referring to the liquidation of Rangers FC which had won or shared in 54 Scottish title wins and the pretence that has existed since that club had a CVA rejected by its creditors and it was plunged into liquidation.

That pretence tries to make everyone in the game believe that the off the shelf company that founding father Charles Green used to set up a Phoenix football club to play out of the basket of assets that he bought from the Administrators.

“I’ve never seen fans win a football match, it will be loud but it won’t be a lion’s den,” Gerrard said.

“A lion’s den is when four lions jump over a cage and you fear for your life,” Gerrard stated – David Attenborough he is not. 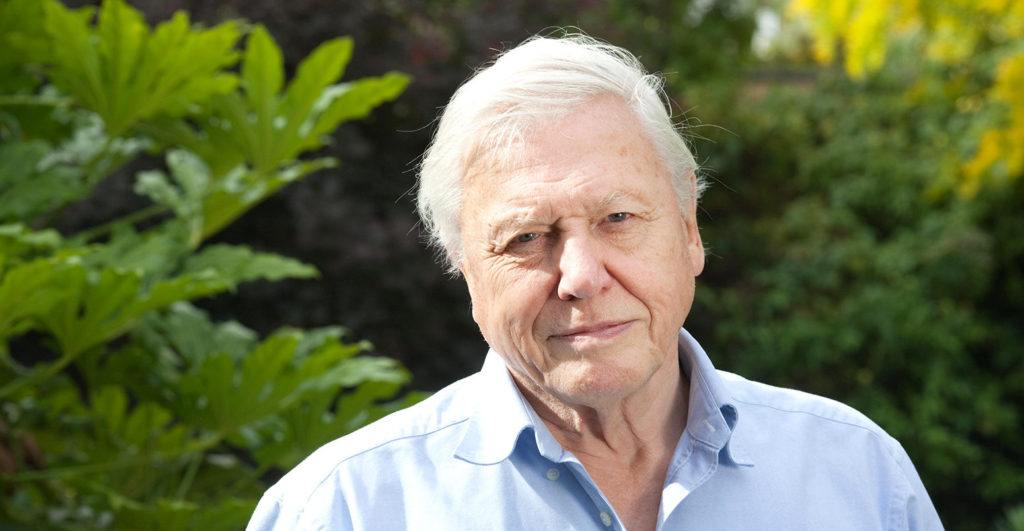 David Attenborough in The Jungle!

“You have to thrive in this atmosphere. If any of my players don’t fancy it they are at the wrong club.”

Gerrard reckons that The Celtic supporters wont have much of an influence on the game on Sunday then goes on to say that the ‘power of Ibrox’ was a big help in securing their first ever win over Celtic in any match that didn’t go to a penalty shoot-out.

“This time we won’t have the power of Ibrox behind us which was a big help, but the players have to have that mentality to go and get the job done.

“If you go in with the wrong mentality you won’t win these games. You have to take responsibility individually and collectively,” Gerrard said.

“We understand the gap in the league, for us, it is can we affect that? Celtic are clear favourites and this is probably our last opportunity to make it more interesting than it is at the moment.”

Gerrard also confirmed that he’ll be without his assistant Gary McAllister who was the victim of a vicious assault in Leeds last week. McAllister is regarded as the brains of the managerial team at Ibrox so his absence will be a blow to their hopes.

“I took the decision out of Gary McAllister’s hands, he won’t be with us at the weekend,” Gerrard said. “It is a shame but he has to focus on his recovery and we can’t wait for him to return.”

Gerrard looked back at his time playing in Derby matches down south and reckons that the any away day success was more enjoyable.

“It is a better feeling winning away. I thrived on the environment when everyone is against you.”

But let’s go back to Gerrard’s ‘They are at the wrong club’ remark and look back to Friday 15 June 2012 – because that was the day that RANGERS died.

The Rangers creditors drifted in through Exit 50 at Ibrox Stadium just before 10am and by 10.09am they were on their way out. In those few minutes 140 years of history had been rubbed out.

Of the few owed money by the club who attended the meeting at the Ibrox Suite most didn’t want to talk, and the few that did struggled.

“We’re in shock,” admitted debenture holder Stewart Boal. “The club’s gone. We’ve got to move on and start again.”

In truth, everyone knew the meeting was a mere formality after HMRC announced earlier that week that it would reject Charles Green’s terms for a company voluntary arrangement (CVA).

Few of the 276 creditors, who were owed somewhere in the region of £134 million and ranged from a face painter and magician to the local newsagent, turned up for the meeting.

Those that did were clearly shocked by the speed of the club’s end. Asked to sum up his feelings, as he left Ibrox, Mr Boal said he found the whole thing “unreal, very, very sad”.

Before the first ever meeting between Celtic and the club founded by Charles Green, at Hampden in a League Cup semi-final in 2015, Celtic supporters crowd funded an advertisement in a Sunday newspaper the week before the game, to outline the truth so that it was on the record.

Here’s what they had to say… 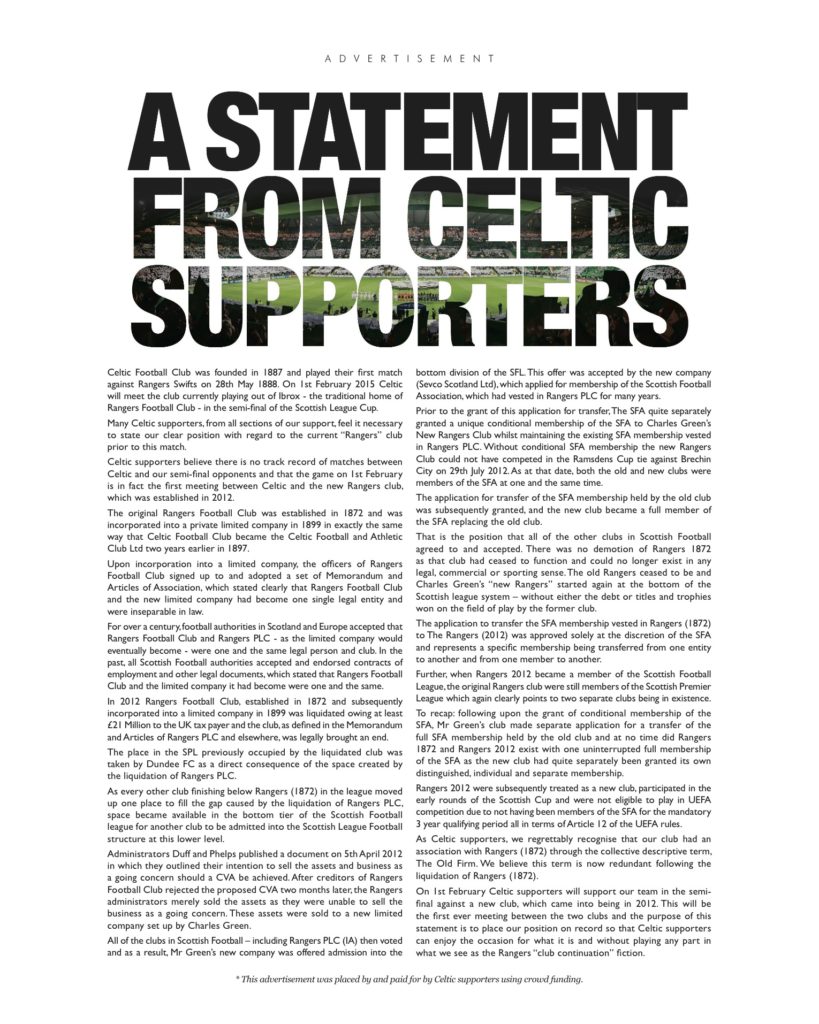 The Rangers Football Club was formed in 1872 as an unincorporated association of individuals, each of whom had unlimited personal liability for the club’s debts and obligations.

The club consisted of the individuals who ran it. It had no separate legal personality.

The club was incorporated on 27  May 1899 as “The Rangers Football Club Limited”. Its details and the date of incorporation can be seen by entering the company number SC004276 on the webcheck section of the Companies House website.

The legal effect of a sports club incorporating as a limited company is neatly summarised on the Sportscotland website, which states:

“Converting your sports club to a Limited Company enables your club to become established as a legal entity in its own right, separate from the individual members.

• Because the club is a distinct legal entity, it is easier for the club to enter into contractual arrangements e.g. to borrow money, own buildings, or stage very large events.
• The club itself, rather than the individual members, are responsible for the club’s obligations and debts (unless one of the officers has acted negligently or fraudulently, in which case the individual remains personally liable)
• And the individual members can only be held responsible for the debts and obligations of the club up to the nominal value of their guarantee.”

The key point is that, upon incorporation, a club becomes a limited company. The limited company (in Rangers’ case company SC004276) was the club. From 27th May 1899 onwards, the club and company were one and the same.

At the time it agreed to purchase certain assets of the club, Sevco Scotland Limited (now called The Rangers Football Club Limited) was not itself a football club. It subsequently became a football club when it was granted conditional membership of the Scottish Football Association and a licence to operate as a football club under the auspices of the SFA.

The football club formed in 1899 still exists, but is no longer active as a football club. It is a corporate husk, kept alive temporarily while its liquidators seek to recover as large a portion as possible for its creditors of the money which the creditors are owed by it. It will remain in existence only until the liquidation process is complete, at which point it will be dissolved and removed from the Register of Companies. It played its final competitive football match on Sunday, 13 May 2012, twelve days before the club currently playing out of Ibrox came into existence.

So Stephen Gerrard is correct in what he says, whatever the result at the weekend his players are indeed at the wrong club.

If this is all a bit long winded, we could simply let Leigh Griffiths provide a summary…

Previous ArticleMassive Double Boost from Lennoxtown, plus ‘important information’ from Celtic
Next Article Brendan Rodgers to watch Celtic v the Rangers on Sunday