You are at:Home»Latest»Thirty Years On, looking back at Judas, ‘the Failed Tracksuit Salesman’

MAURICE Johnston was born in Glasgow on 13 April 1963. He began his career at Partick Thistle in 1981, scoring 41 goals in 85 appearances, before winning a transfer to Elton John’s Watford in 1983. Johnston scored 23 league goals in English football, made his international debut, and helped the team reach 1984 FA Cup Final, where Watford lost 2-0 to Everton.

After just over a season with Watford Johnston moved to Celtic where he became a prolific scorer and a favourite with a large section of the Celtic support. Johnston netted 52 goals in 140 matches, winning the Scottish Cup in 1985 and League Championship in 1986 after a dramatic last day snatch of the title from Hearts. 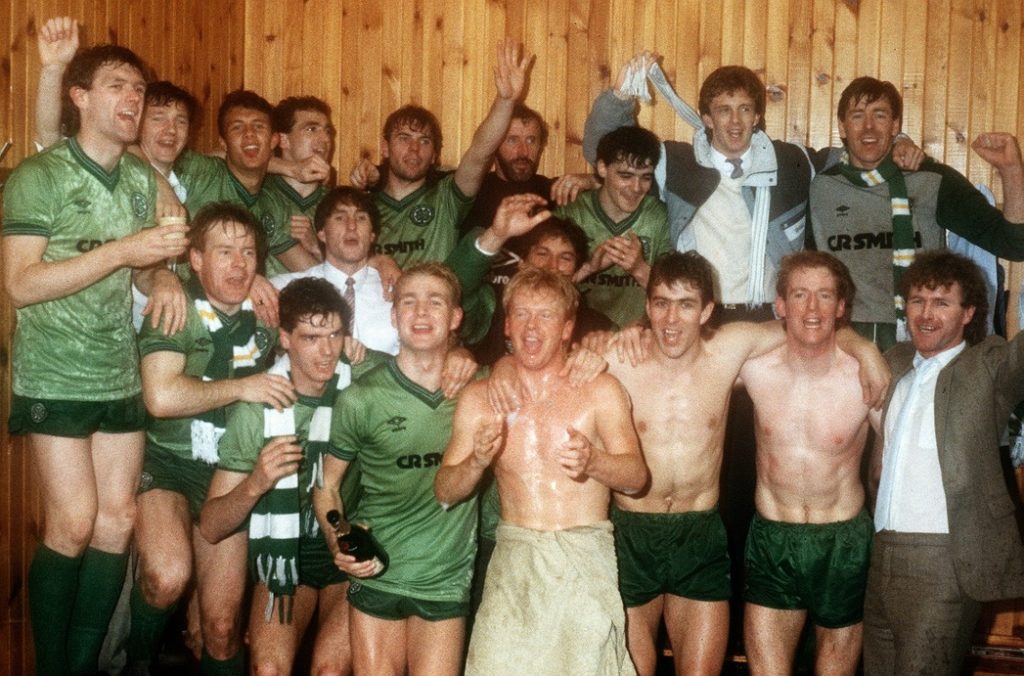 Celtic needed to win by four goals at Love Street in Paisley and hope that Hearts would lose at Dens Park. The Hoops put on a vintage performance and had their part of the bargain sealed by half time. It was the transistor radio’s finest football moment, when with less than ten minutes to go, news reached the Celtic supporters with the trannies at their ears that Albert Kidd had scored not once but twice for Dundee. Celtic would be champions at the final whistle.

Johnston had established an international reputation while playing for Scotland. In one memorable World Cup Qualifying match at Hampden in November 1984 he scored twice against Spain in a 3-1 victory and this type of performance opened the door for him to move to the continent. 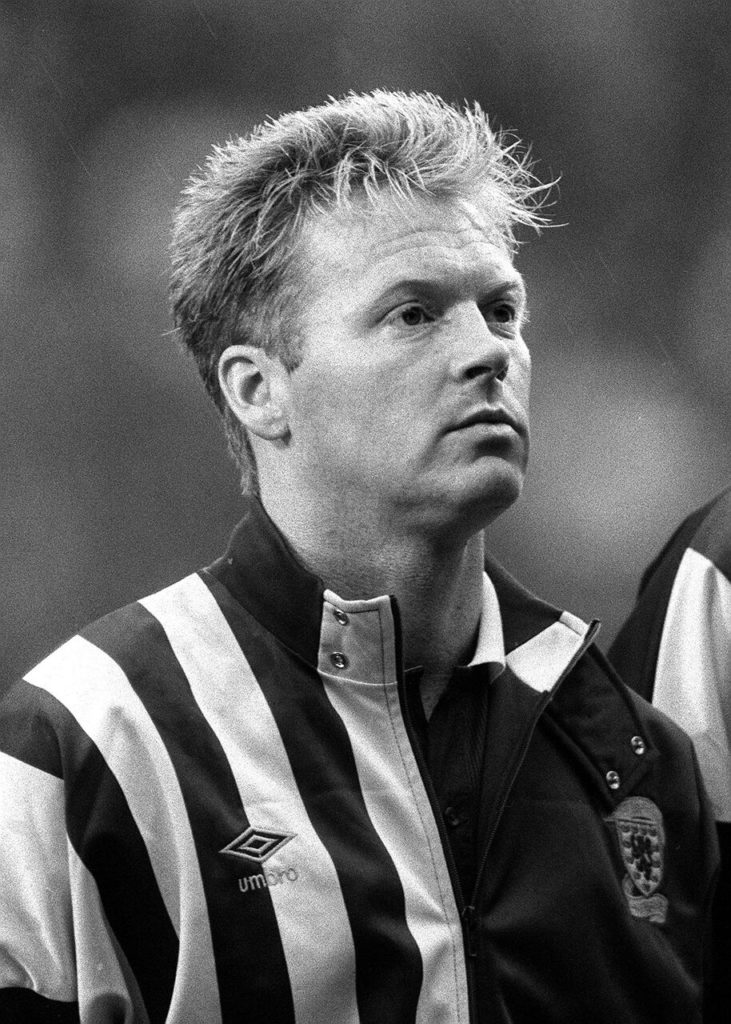 Johnston left Celtic for France in 1987 signing for Nantes but Glasgow was never far way from his thoughts. His time in France seemed to make him a more complete footballer for those Scotland fans who had previous watched him in play domestically in Scottish football. Rumours in the media that a return home to his boyhood favourites Celtic seemed likely and gave Celtic fans a great deal of hope in increasing tough times.

Souness had arrived at Ibrox and shortly afterwards David Murray’s (ultimately bouncy) cheque-book became a factor in Scottish football. Rangers, languishing mid table in the league for much of the first half of the 1980’s, saw their chance.

While Celtic hesitated over an outstanding tax matter at Johnston’s end Murray and Souness pounced. Murray was a businessman who believed that he could be as creative as he liked when it came to dealings with the taxman. He later discovered that Hector had teeth. 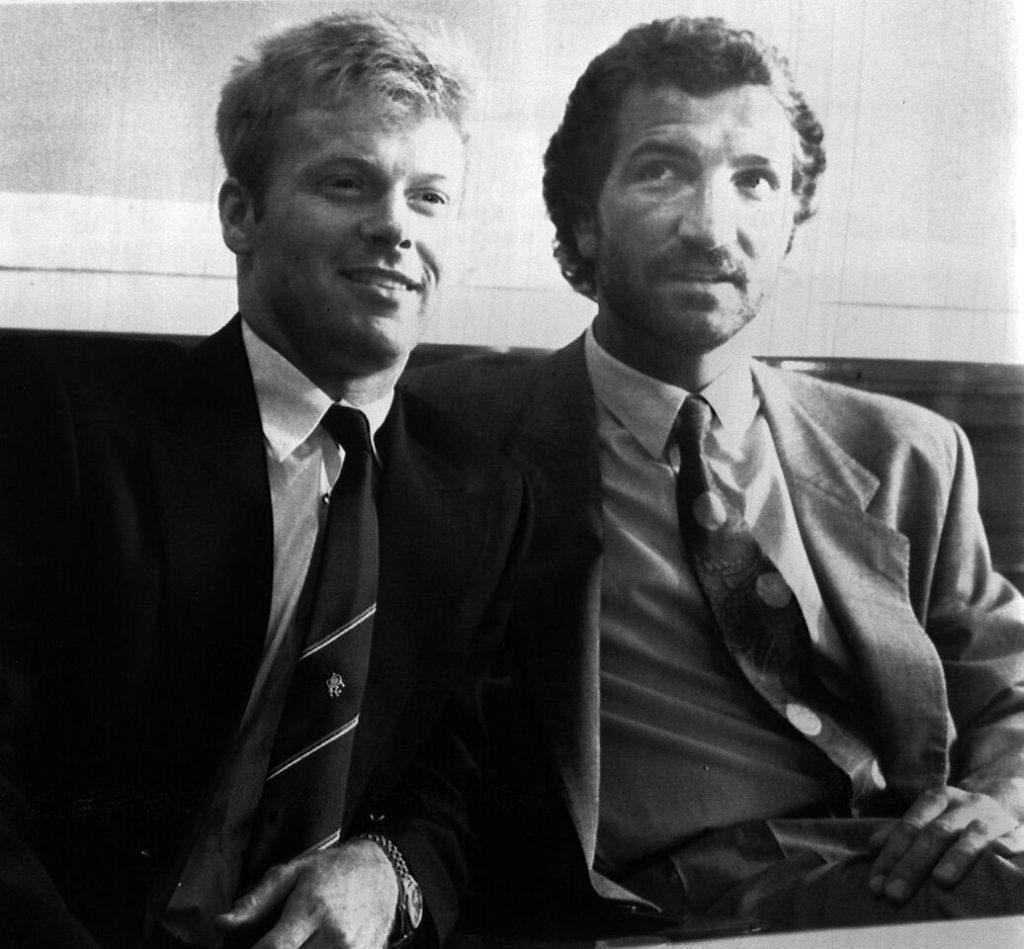 Having never signed a Roman Catholic player – an increasing untenable position in the modern game and one that FIFA were now taking an interest in – the Ibrox bosses saw their opportunity to solve their problem with the football authorities and at the same time break the collective Celtic spirit.

Johnston, who had posed for photographs with a Celtic top ahead of a return to Paradise, did the unthinkable and instead signed for Rangers. In doing so he became only the second player to have played for both Celtic and Rangers in the post war era. The first was Alfie Conn who Jock Stein signed for Celtic from Tottenham in the 70’s.

Alfie played for Celtic in the Scottish Cup Final victory over Rangers in 1977 when Andy Lynch scored the only goal from the penalty spot. But there was no religious discrimination at Celtic – indeed Jock Stein himself was protestant.

Johnston became the first Catholic to have played for Rangers in the 20th Century and he did it whilst jilting Celtic at the alter.

The legend of Judas was born.

After winning trophies at Ibrox but with little love coming from its bigoted stands, Johnston moved to Everton then had spells at Hearts, Falkirk and American MLS side Kansas City Wizards before retiring in 2001. Johnston has settled in the USA, destined to exile for his infamy and disliked in equal measures by Celtic and Rangers supporters.

Stephen: How could he? Colin: Some balls to do what he did. Hate him for it

Paul: Adored him until he did this. It wasn’t the fact he signed for them…. It was how it was done…. A deliberate move to embarrass and knock the wind out of our team for years! Unforgivable. But he who laughs last…

Gordon: Unforgiven. Gary: On my time line is Tommy Burns and up pops Judas. I remember Danny McGrain saying when MJ was sent off in the league cup final against Rangers and he blessed himself he was the only Catholic member of the Celtic squad who didn’t attend chapel that morning 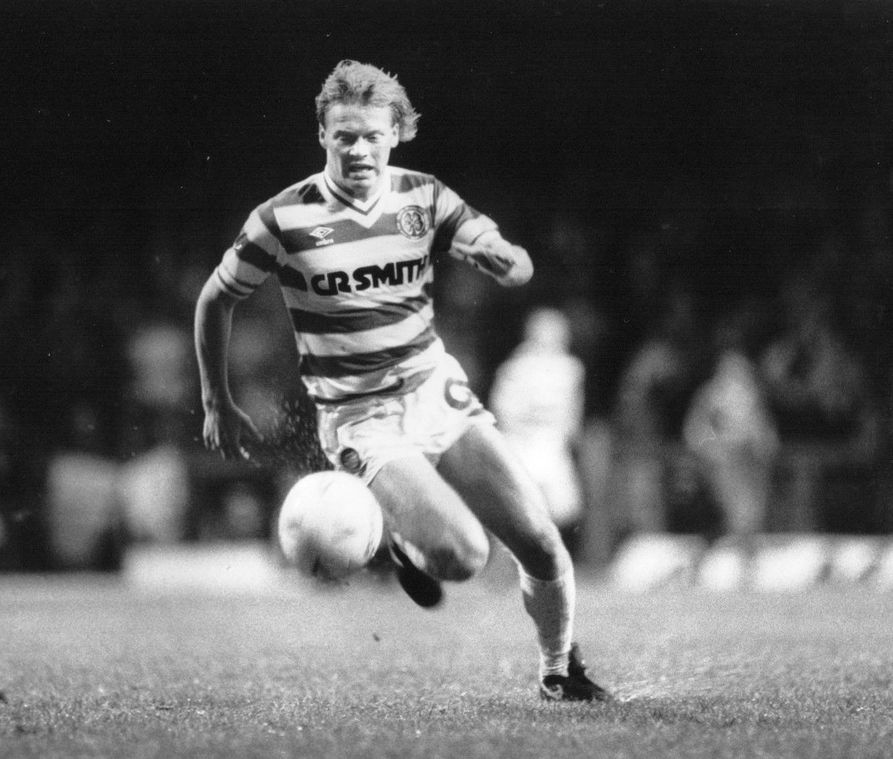 Alistair: I guess he’d watched too many episodes of Miami Vice thinking Florida was a pretty cool place to spend the rest of his life in exile!!!

Alan: Forgive and forget? Let it go? The man made a choice that most of us were sickened by. I remember as a kid going to Spain to visit family and having a Shoot magazine with an article about his move back to Celtic. I told my Spanish cousins he was the greatest footballer around. I was gutted when he joined ‘them’ but we’re better than that, we’re Celtic. We should let them be the ones with the issues. Where are they now? Where is he now? Nowhere, that’s the answer to both questions.

Colin: Balls? You mean money! That’s all he was interested in, I knew him from years ago when his granny stayed at my bit and he used to visit her, he knew exactly what he was doing and he did it because of the money, he was young and had Bill McMurdo and others bending his ear but it was the way he did it that angered many of us and left big Billy McNeill and Celtic standing with their wotsits in the wind, a lot of people raging, not to mention he was a Catholic who had done this to us and was first one to sign for them. I bet he wishes he never did it now because both sides hate him, if he didn’t do that he would still be a legend in many peoples’ eyes. I used to adore the man. 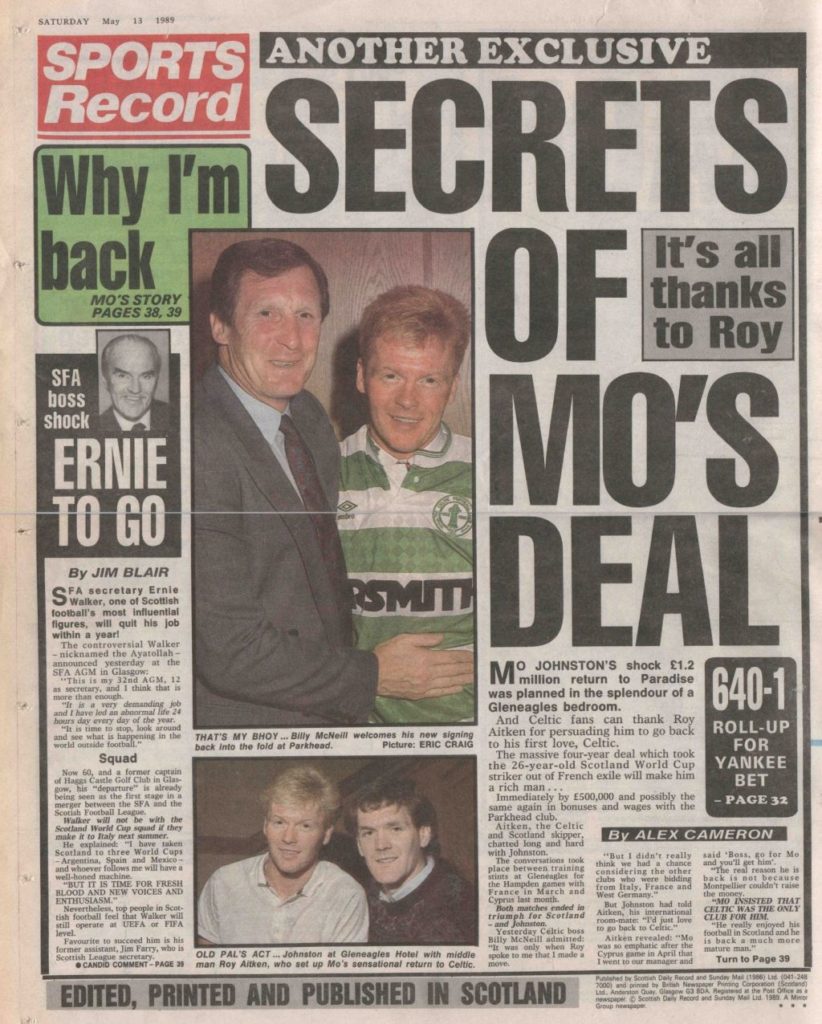 Iain: I still remember that day so vividly. It was a terrible shock to me. He was a good Celtic player who will be remembered for all the wrong reasons. I for one will never forgive him. He is indeed Judas.

Jack: Money. Pure and simple. Chris: Unforgivable….Barry: Plus he got his wages tax-‘free’.

John: I was driving down the M8, and the news said, “Rangers sign their first Catholic”…I honestly thought it was John Sheridan…. 40 seconds later I pulled up on hard shoulder…”mojo ya twat”, was my thought, “ya f***** eejit.”

Andrew: He signed for them around the 12 July 1989. I was on my honeymoon, having got married on the 8 July. My stag night was on the 1 July, my business partner (a Zombie) bet my best friend a month’s wages that he had signed for Rangers. Oh! How we mocked him. His neighbour was Gerry of CR Smith. It was leaked from there. My honeymoon was ruined. He embarrassed Billy McNeill and humiliated Celtic FC and it’s fans, all for personal financial gain and to feed his ego. It was a deliberate act, held together by a liar. He sold his soul for money. Ironically he was the first to be paid by the old Rangers in a way that was net of tax. He was the one that set them on the road to liquidation.

Mark: After a lot of soul-searching, I’ve come to the conclusion that Mojo is a ****!

Dnx: It seems obvious, in hindsight. Where else would a whore go to work, but a brothel? And, as happens to all ageing prostitutes, those who once adored him now abhor him.

Francis: Him and chocy at Love Street was bliss. I was eleven and he was my hero! Two years later I really felt as if a demon had tainted my soul, but I was only a young lad. Since growing I’ve learnt it was my mistake when a man like Tommy Burns was on the pitch. God bless Tommy!!! and Mo who?

Stevie: It was a despicable deed that Souness fully admitted to doing deliberately just to hurt Celtic. It never happened without Murray or Judas though not to mention that wee weasel Bill McMurdo.

Charles: This was a moment that defined Murray as a capitalist, self-concerned, user of other people’s money. All the more reason to celebrate his and Rangers demise. They have been found out and for those who don’t think the old co should be stripped of titles this signing should serve as justification of why it is still important to teach them that cheats don’t win. 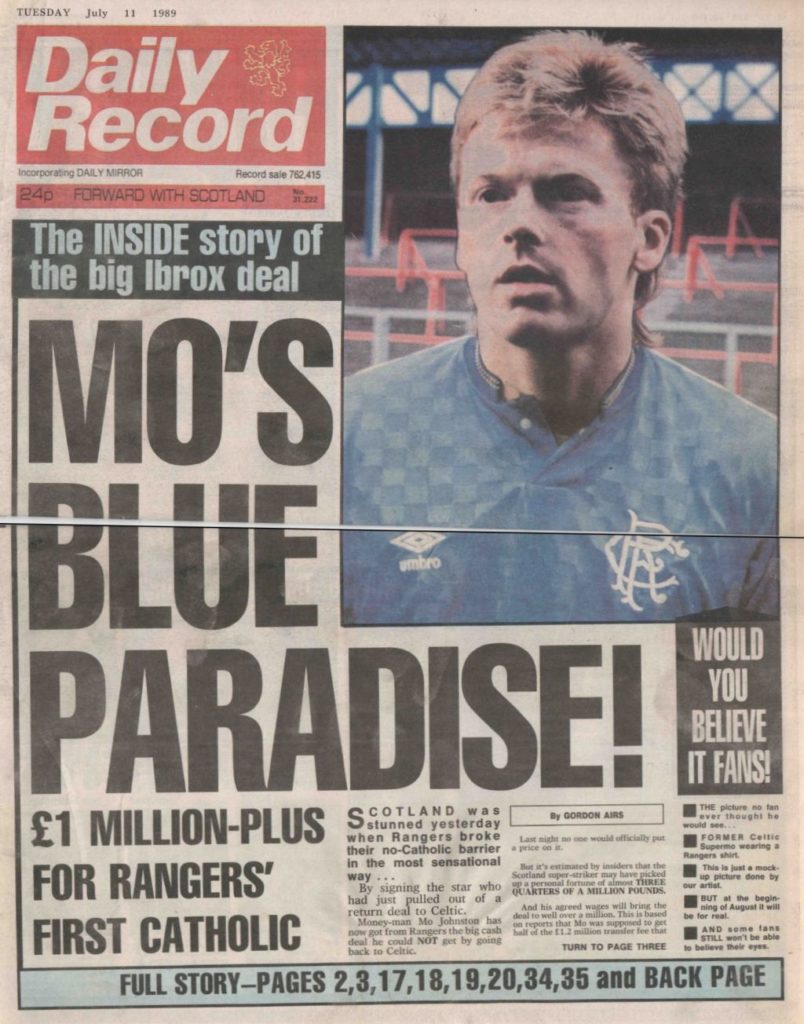 John: He was/is just a rat. Helen: I remember that day like it was yesterday. It wasn’t good… He totally betrayed us… I can’t forgive Judas.

John: If he’d gone to Rangers from Nantes that would still have been a shock and he would still have got abuse, from both sets. But the old board would have been blamed. “This is how bad it is, can’t even sign Mo etc”. But to do what he did to big Billy and to the fans has earned him an eternity of loathing by the Celtic support. He’s a modern day parable. Should be taught in school. 🙂

Peter: Money, money, money. Harry: And as a result, Judas can never show his face in Scotland again. That’s just so good!

Ross: Anyone read Frank McGarvey’s book? He states in his book the deal for Mo to sign for them was done in a Cafe in Paris the previous February.

Jim: Wonder if he regrets it now though? He chose money over Celtic…says it all about him really… he also stated in his book when he played for us that he HATED r*ngers and McMurdo as his agent says it all.

Fraser: What a great thread, shows some parts of Scotland was and is still in the dark ages, how could he? Get real.

Paul: Wonder if he sleeps well on that stinking money? The orcs never took to him. Some burned their season tickets. Some never forgave Souness/Murray. We adored him like they never! He will regret it that I am sure! 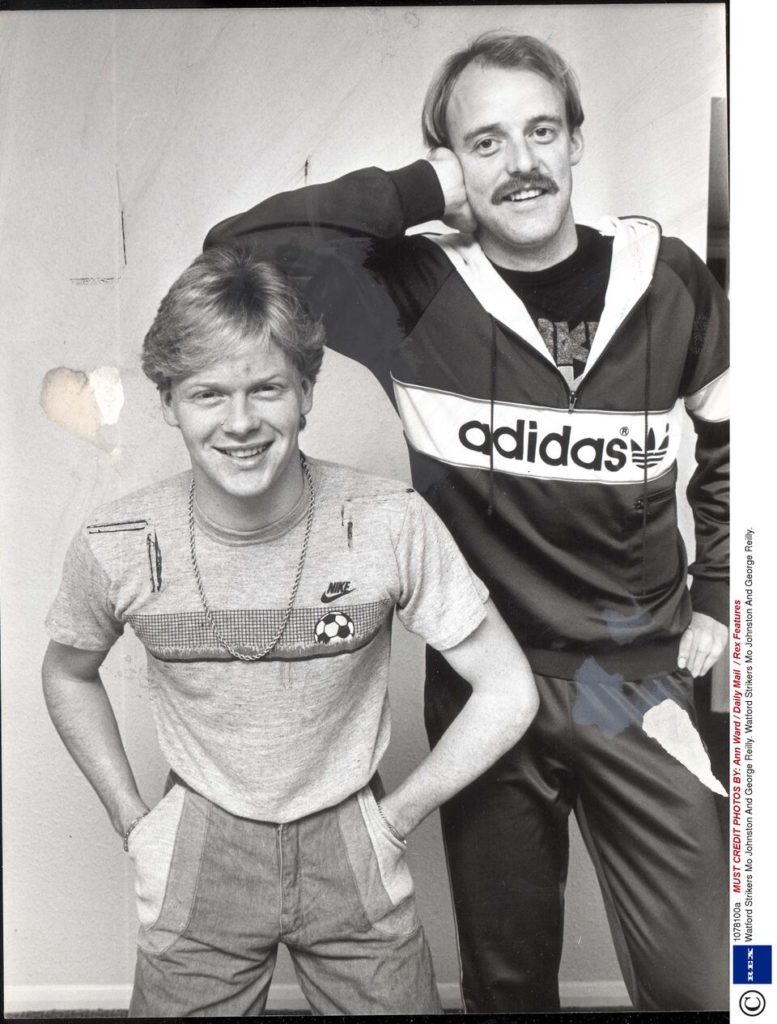 Stevie: Fraser I think you miss the point completely. One second he had media shots wearing the hoops and next minute in a press conference with Souness et al. He stabbed Celtic in the back for money and Souness’ motive was on one thing only – wound Celtic. It was Rangers first catholic signing in an anti-catholic policy era. Who was in the dark ages?

Jason:  Scorer of one of our best ever goals. A hero to many, now a filthy tainted s***bag to all.

WOULD you like to contribute to The Celtic Star? You can write about any Celtic related subject you like! Just send an email to editor@thecelticstar.co.uk and we will get right back to you.

Previous ArticleWhy did Rodgers sign Compper? ‘I was told very early on that I wasn’t in their plans,’ Compper reveals
Next Article ‘We will certainly not surrender,’ Sarajevo stars brand Celtic lucky and aim for upset in second leg