You are at:Home»Latest»This is it Bhoys, this is War – Celtic in War Time 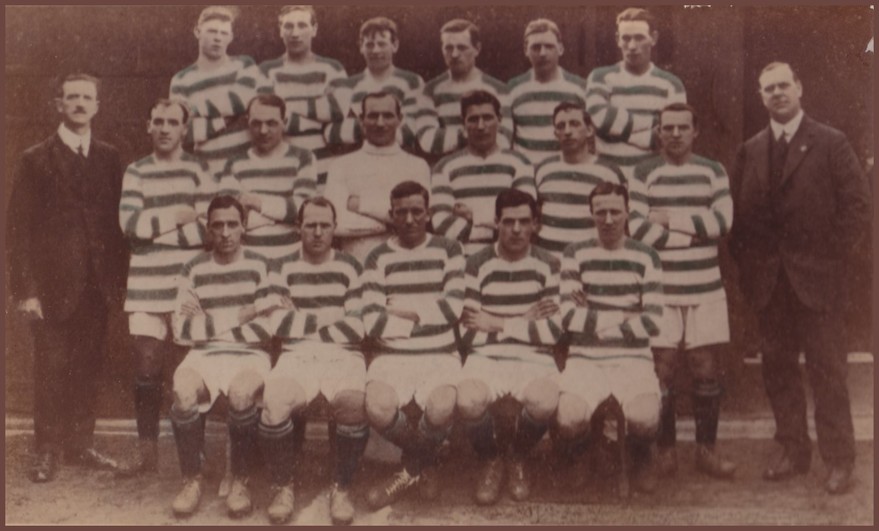 Let us review the football played in the difficult times of the two wars of the 20th century. There is a huge difference between Celtic’s performance in both wars – and the reason was Willie Maley. In 1914 -19, Maley, in his late 40s was at the height of his powers, already the most important man in Scottish football with a persona and an aura about him, and he was able to ensure through his many contacts that most of his superbly talented side of 1914 were able to get jobs in the munitions industries.

Full time professional football was not allowed, and every player had to be either in the forces or in some war-related industry before he was allowed to play football on a Saturday afternoon. It was far from satisfactory, but it was better than the trenches, and Maley worked hard to keep his men out of the Army.

Odd behaviour, in some ways, for the son of a soldier, but for Maley, Celtic came first. 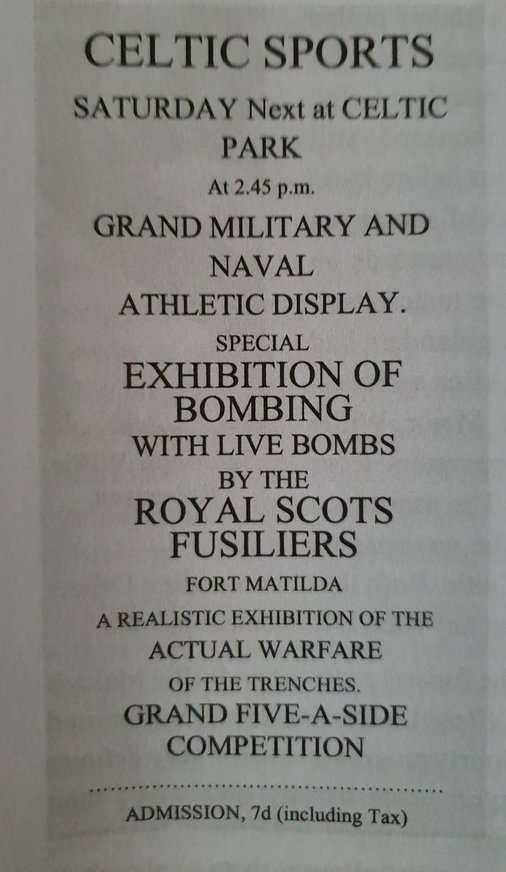 Maley’s hard work made sure that Celtic were able to win the League in 1915, 1916, 1917 and 1919. There was no Scottish Cup played in the War, but the Glasgow Cup and Glasgow Charity Cup continued.

In April 1916, they played two games on one day, won the pair of them and in so doing won the Scottish League. The dominance of the other teams was extraordinary. 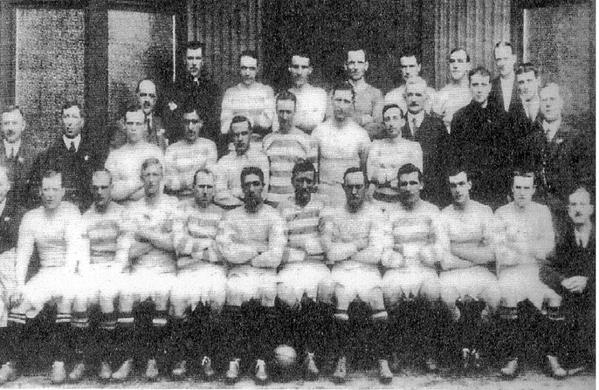 World War I was, thus, a remarkable time for Celtic, and it was not that they didn’t have their problems. Peter Johnstone joined up and was killed in 1917, Patsy Gallacher was (irrationally) suspended from football for eight matches in 1916/17 for “bad timekeeping” at his job in the shipyards, Sunny Jim’s long and illustrious career came to an end after a bad injury in 1916 and several men, notably Andy McAtee and Joe Dodds were drafted into the army in the “comb-out” of 1918, even though they might have thought themselves protected against this.

There were times when players were delayed by war-time transport, and the team would have to take the field with only 9 or 10 men … but that was wartime football for you! 1918/19 was maybe in some ways their best triumph, because for much of that time, with the country at sixes and sevens in any case, there was also a pandemic going around called the “Spanish flu”. Jimmy McMenemy was a sufferer, but recovered and Celtic duly won the League.

Calton, 1916
West side of Green Street and north Green St, 1916. Another great image from our ‘Calton Lecture’ series. pic.twitter.com/7oN26DXhSz

One cannot imagine just what all this did for the supporters. The supporters had little enough to be happy about in other respects. Heavy casualties in the war, labour problems and uncertainties about relatives in Ireland were serious things to cope with, but at least their team was superb. Maley always made sure that the results were telegraphed to the War Office so that soldiers would know the results within an hour or so, he sent footballs to men in the trenches for lulls in the fighting, and he and William Wilton of Rangers were frequently seen in Glasgow hospitals talking to wounded soldiers. Celtic also continued their admirable work for charities.

Patsy Gallacher was “the most talked about man in the trenches”, it was claimed, and it would be wrong to think that football was peripheral to war-time life. Absolutely not so! Football and the infant cinema which showed films of Charlie Chaplin were of vital importance to morale.

1939-46 was a different matter, altogether. Maley was 71 when the war started, and was ailing. He had had all sorts of depressive illnesses, was morose, curmudgeonly, anti-social and, plain and simply, just difficult and awkward. He had fallen out with the Board over having to pay income tax on an honorarium which they gave him in 1938 for 50 years’s service, and it would have been better if he had announced his resignation immediately after the Empire Exhibition Trophy of 1938.

He eventually resigned/ retired/ was sacked/ (take your own spin!) in early New Year 1940, leaving the Board to appoint Jimmy McStay as his successor, ignoring the better qualified Jimmy McMenemy.

McStay had been a great captain, and he might have been a great Manager in other circumstances, but 1940 was a bad time. Basically he was asked to fill the huge vacuum the Maley had left at a time when both Celtic FC and football itself were in turmoil – and could not do it. 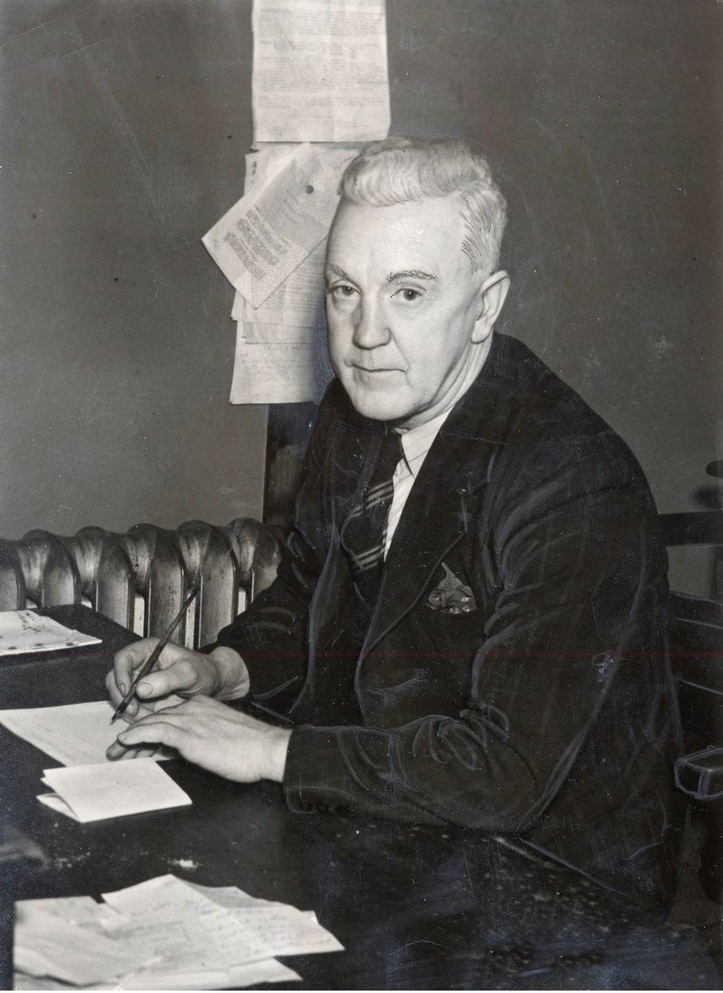 Rangers on the other hand did exactly what Celtic had done in the previous war. Struth was not called “ruthless Struth” for nothing, and he protected his players. Celtic were nowhere, and the only club that put up a semblance of resistance to Rangers were Hibs. Celtic suffering badly with the absence of Jimmy Delaney whose broken arm took two years to heal, and lacking any real initiative and leadership had to be content with two trophies – the Glasgow Cup of 1940 when they beat Rangers 1-0 in the final, and the Glasgow Charity Cup when they beat Third Lanark 3-0.

Against that, there was abject failure in other competitions with the 8-1 defeat by Rangers on New Year’s Day 1943 a particular low point. Sadly, in spite of the support staying with them, the depression stayed on until well after the war, until Celtic won the Scottish Cup again in 1951. Although there were a few excuses for war-time failures (they were indeed unusual times), the Board must stand condemned for the post-war gloom.

A brief overview of the project. This book will be the previously untold story of Celtic FC during WWII.

A story from Celtic In The Second World War. It captures the absolute chaos of wartime football.

The night Stevie Chalmers shocked World Champions Brazil and John Clark kept Pele quiet
“I consider Ange a friend and a mentor,” Muscat praises Postecoglou’s influence
Juranovic’s value can soar with Champions League and World Cup exposure
Previous Article“McGregor’s performances have been out of the top drawer,” Sutton praises Celtic captain
Next Article A re-evaluation of our European Ambitions is essential