As Motherwell visit Celtic Park tomorrow, we look back at the last time the Steelmen were in Glasgow’s East End, earlier this year. In a 4-1 victory to the Celts, there were circumstances unfolding on and off the pitch that were quite unsavoury for the Celtic fans, especially after a European exit a few days before in Spain.

It would be Brendan Rodgers’ last match as manager of Celtic before he hastily headed for Leicester City a few days later.

The game had the feel of a Derby match to it after the visitors capitalised from a throw-in, having been put out to treat Ryan Christie by Celtic; however, the Steelmen broke on a bewildered Celtic defence and scored.

Here is the match report from The Celtic Star that day:

MOTHERWELL robbed Celtic of their record of not having conceded a goal in domestic football through the biggest piece of unsportsmanlike behaviour that you will see in this or any other season today. 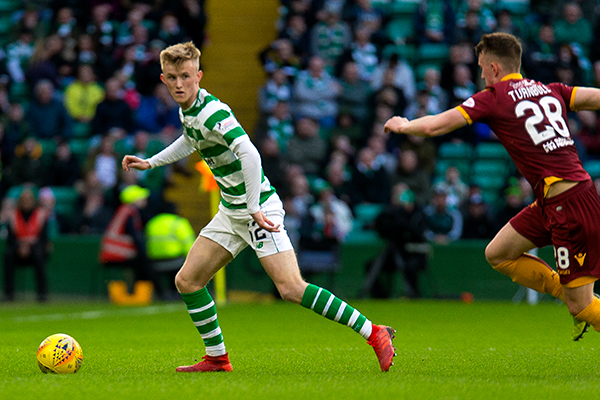 Celtic were two up and costing after a volley from Sinclair and a header from Edouard in the first half when Ryan Christie went down in front of the Celtic dugout five minutes into the second half.

The ball was kicked out by Celtic to allow Christie to get treatment on what looked like a hamstring injury.

Christie day was over and Jack Hendry was preparing to come on when play resumed with a Motherwell player throwing the ball down the line to return possession to Celtic. 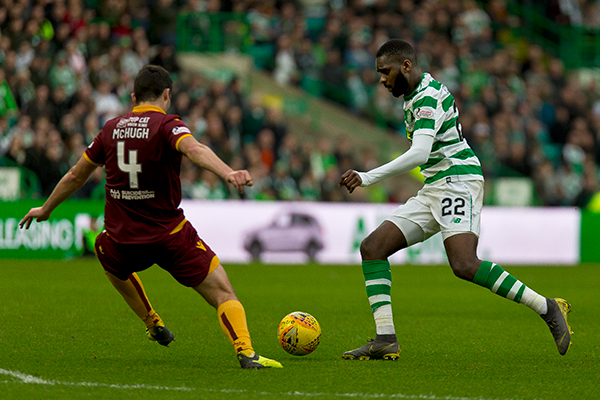 But Scott has other ideas and chased the through and advanced with no one near him into the Celtic box. Scott Bain saved his effort but could do nothing about the tap in for Ariyibi who knocked in the rebound. Boyata is booked in the ensuing controversy along with two Motherwell players.

The crowd, rightly, let Motherwell know what they thought of their behaviour.

The goal rattled Celtic and Motherwell sensed that there was a shock equaliser on the cards. There were three drop balls in the Motherwell half after that – all were contested and all won by Celtic players.

The game was put to bed when Odsonne Edouard won and took a free kick 25 yards out. He scored with a wonderful shot to get it right up these cheats. 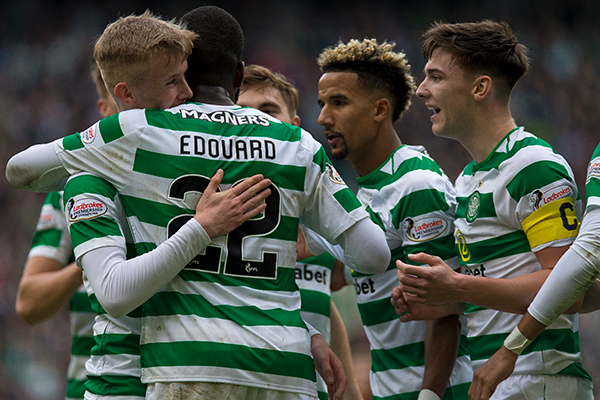 Then Forrest set up substitute Oli Burke to drive the ball into the net for a sweet fourth.

The referee added on an incredible 9 minutes of stoppage time and in another wonderful counter attack Scotty Sinclair could have added a fifth.

By this stage Ewan Henderson, today’s man of the Match, was the only midfielder Celtic had on the park.

With Callum McGregor and now Ryan Christie now injured he may get plenty more game time in the next few matches.

Celtic had put aside the disappointment of exiting the Europa League against Motherwell this afternoon.

Brendan Rodgers had shuffled the pack bringing in Kieran Tierney, Ewan Henderson and Nir Bitton to the side. Odsonne Edouard replaced Oli Burke as the striker.

KT captained the side in the absence of Scott Brown – who featured prominently in a new chant from the Standing Section ( Scott Brown won the League at Rugby Park) – and it was one of his trademark runs driving down the left hand side that led to the opener. 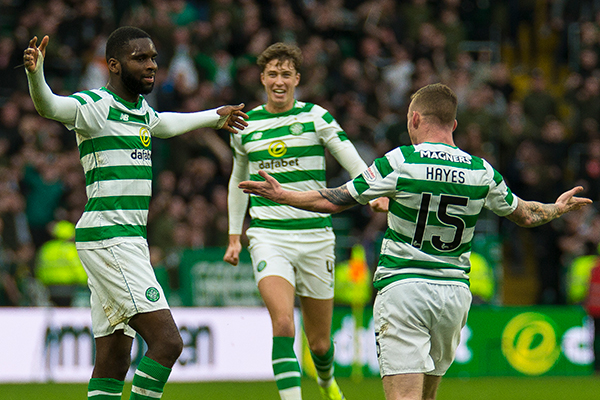 Tierney turned and rolled the ball back gently for Ryan Christie to float a first time ball into the box. Scotty Sinclair, finding the right places inside the opposition area these days, placed his volley past Gillespie in the Motherwell goal. Simple and effective football from Celtic down the left – 1-0 Celtic after 31 minutes.

Then the Bhoys on the right wing showed they could do something similar with 37 minutes played. Dedryck Boyata saw an opportunity to step forward down the right and played a lovely forward pass to the impressive Ewan Henderson and his cross from near the byeline was headed into the net by Odsonne Edouard with Gillespie rooted to the spot.

Edouard was the only player booked in the first half by referee Kevin Clancy, it looked harsh.

Three other Celts picked up cautions, Boyata for an angry response to the cheating and Ayer and a Toljjan for fouls. Four Motherwell players were also booked. 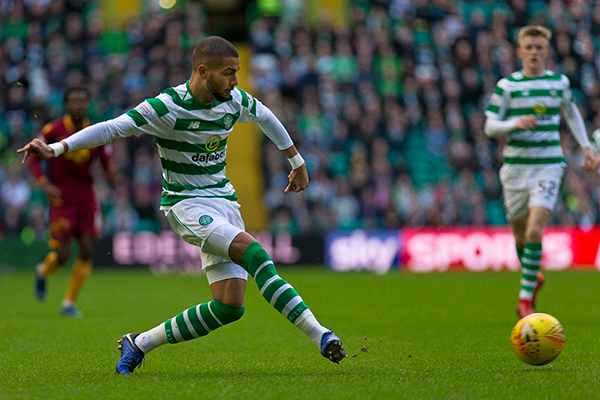 Justice was done with the extra goals but Motherwell ended the day disgraced.

Man of the Match – Ewan Henderson