ON THIS DAY in 2017, Celtic were at Hampden for the 2017 Scottish Cup final against Derek McInnes’ Aberdeen. Brendan Rodgers side had gone unbeaten in all domestic competitions so far and only the Dons stood between them and an Invincible Treble.

The Dons had become the nearest challengers in recent seasons and had run Ronny Deila’s Celtic close on a number of occasions the previous season – winning twice at Pittodrie. However, Brendan Rodgers’ arrival at Celtic Park meant the Scottish Champions were victories in five of the meetings with the Granite City side, even if two were narrow 1-0 wins.

The day was muggy with spells of sunshine between the heavy rain clouds. The atmosphere was tense with Celtic on the cusp of Invincibility. Aberdeen had taken a full allocation at Hampden (despite a number of empty seats towards the front) meaning that tickets in the Celtic end were gold dust. Fortunately, I had managed to get the same two (roughly) as the semi-final win over the Rangers – around the 18-yard box in the North Stand.

The ground filled, buzzing in anticipation. The Hampden hoodoo rhetoric had been played out in the press during the week and McInnes’ Aberdeen were more formidable than Danny Lennon’s St Mirren, Kenny Sheils’ Kilmarnock or Jim McIntyre’s Ross County – all of whom had upset the Hoops at Hampden within the decade.

Aberdeen were allowed a display after the Police blocked the Green Brigade’s attempts to organise a tifo. Admittedly the players and fans did not need to be reminded how important this game was.

An Aberdeen corner from former Celt Niall McGinn was floated to the back post. In line with our seat, we could see Leigh Griffiths lose Jonny Hayes and the Irishman smash the ball between Kieran Tierney and Craig Gordon into the net. 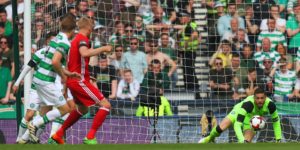 The initial groans from the Celtic support and celebrations from the other end were drowned out as the Celtic fans issued a rallying cry to the players.

Aberdeen hadn’t touched the ball since scoring, the mark of not just any old Champions. The mark of Invincible Champions. 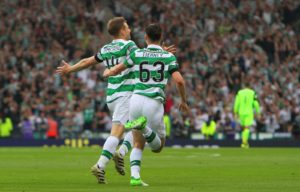 Along the touchline in front of the dugout, the game stopped as Celtic contested a throw in. Kieran Tierney was on the floor and it looked as if there was blood. He had taken a whack in the face from Stockley, resulting in his afternoon on the pitch ending.

Enter Tom Rogic. The Australian was subbed on as Callum McGregor moved to left back as Celtic had to reorganise as a result of Tierney’s injury.

Craig Gordon made a solid save from Ryan Jack as the first half remained in the balance. Stockley rose from a McGinn corner and Gordon was there again, blocking any danger.

The sunlight burst through the clouds as Celtic got into their grove. Shortly before the whistle was blown for the interval. Griffiths found Sinclair, who had been unplayable all season, but he fired the ball over the ball from six yards out. 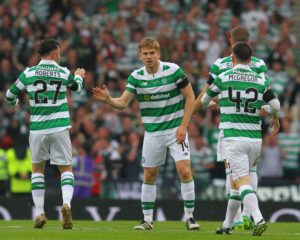 Celtic started the second half with a vengeance, looking to wrap the game up. Rogic lost his man and found Sinclair, who’s touch took him away from the defender before Lewis blocked his shot.

The weight of the humidity and anxiety in the ground was incredible. For all of Celtic’s dominance, they hadn’t found that second goal and Aberdeen looked threatening on the counter.

Scott Brown’s misplaced pass and Callum McGregor was caught in possession around the halfway line, along Hayes to steam down the touchline and cut it back to Kenny McLean, who had an open goal. Fortunately for Celtic, he had overrun the pass, giving Celtic a reprieve as Gordon graciously gathered.

Roberts hit the post, Boyata skied a free header which looked goal bound. Shinnie cracked an effort goalwards but Gordon matched it… just! The game was two heavyweights slugging it out, waiting to see who’d strike the fatal blow. 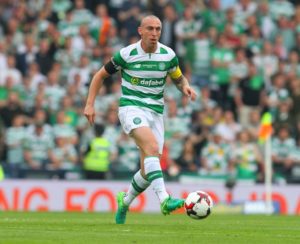 The clouds burst and the rain began to pour down on the South side of Glasgow.

Sinclair had another glorious opportunity as Griffiths found him with a floated pass. He misjudged the flight of the ball, meaning his connection was hampered giving Lewis a chance to scramble it clear.

The game looked set for extra time. Gordon’s kick was sent long as the tired legs of this encounter began to show. Ash Taylor rose above Leigh Griffiths and won the header but Stuart Armstrong latched onto the second ball. He passed it to Rogic. 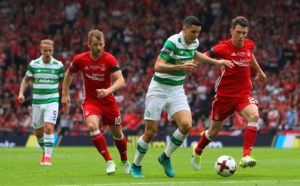 Rogic, burst away from O’Connor slid the ball past Considine and as he did, a fork of lighting and rumble of thunder was heard.

It was nothing on the noise that came from the Celtic support as Rogic’s right footed effort found the net. Celtic had done it. I had never seen celebrations like that, wild and emotional. The weight of expectation and anxiety of the game on a knife edge lifted and elation, a roar like nothing else. 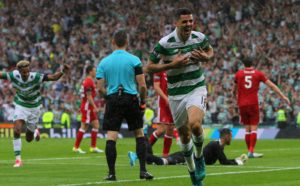 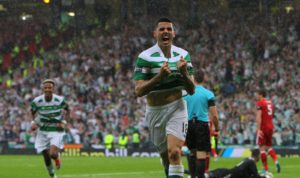 Tom Rogic has written himself into Celtic folklore. The angle looked impossible but he managed to squeeze it in, on his weaker foot.

Aberdeen throw everyone forward. Adam Rooney almost got on the end of a knockdown but it was over. Brendan Rodgers’ Celtic were soaked to the bone but Invincible. 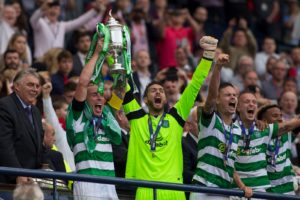 For many the Centenary season Cup Final is a favourite, with many other games in recent seasons challenging for their greatest Celtic moment. For me, it has to be when Tom Rogic scored as lightning struck and Celtic became Invincible.

We secured the Invincible Treble thanks to a dramatic @Tom_Rogic stoppage-time winner! 💯🧙‍♂️ pic.twitter.com/bFKP0QyeP9