You are at:Home»Latest»Tom Rogic could be the answer to Celtic’s striking woes against Livingston

Tom Rogic was withdrawn in the 1-1 draw versus Hibs on Wednesday. Despite being one of the most senior players on the pitch, stand-in-boss Gavin Strachan elected to sub the Australian midfielder for Ewan Henderson.

The decision was a bit baffling given Rogic’s status as one of the most creative players at Strachan’s disposal. However, the midfielder was put into the high-intensity position at the top of the midfield diamond. A role that does not play to Rogic’s strengths. As a result, he was struggling to keep up with the pace of the game. The formation picked by Lennon & Co on Monday played two wingers as the front two and they didn’t have the presence to really break down a stubborn Hibs. Harper made his debut whilst Johnston was continuing his tentative return to first team football. 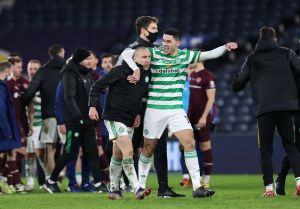 With all four strikers currently out, Celtic are in desperate need of someone to start up top at the weekend as they face David Martindale’s in-form Livi. Rogic is a ten, he is a danger at the edge of the box as well as ghosting into the box. He has a bit of presence that mean he can come short for the ball, allowing two wingers to run in behind.

Ideally, Rogic would be given a ‘false nine’ role allowing him to play between the lines. His skill and touch will be able to find space as well as bring others around him into play – such as Johnston and David Turnbull. Ideally, a winger on either side would allow Rogic to float about and create but not have such an imposition on him as to press the opposition vigorously.

Playing Rogic in an advanced role allows you to get his experience and skill without sacrificing Turnbull’s best position and sacrificing the energy in the midfield.

Celtic will hopefully be able to get a result with the makeshift XI after a late equaliser from Hibs. A change to 4-3-3 may benefit Celtic’s squad that is available and hopefully claw their way back into the title race.

Previous ArticleDermot Desmond looks to appoint his son whilst Hammond’s job is under threat, according to report
Next Article Back to the Fixture: January 14th