You are at:Home»Latest»Tom Rogic makes Celtic commitment ahead of Howe’s arrival

Tom Rogic has decided to ignore international duty with Australia and instead focus on getting himself fit for the arrival of Eddie Howe and the European qualifiers for Celtic. The Australian playmaker struggled for fitness and game time under Neil Lennon with a niggling ankle knock sidelining him for the closing stages of the season. Now, the 28-year-old has opted to get himself fit rather than rushing to play games for Australia.

The World Cup Qualifiers for the Socceroos would normally have been a big pull for Rogic but he has told Graham Arnold that he wants to focus on getting fit for Celtic as opposed to risking his fitness by travelling, training and playing for Australia. As reported by the Sun, Arnold confirmed that this was in order to get himself fit but that it would not be held against him in the future.

“Tom Rogic has a minor ankle injury to deal with and the only time he can get properly fit is now. He’s hoping to use the close season to prepare for Celtic’s European games. It won’t be held against him in future.” 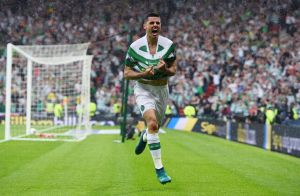 Rogic Scores the Winner in the 2017 Scottish Cup Final

Rogic offers Celtic something entirely different from David Turnbull and Ryan Christie. Brendan Rodgers proved that you can get the best out of the Australian but still maintain the key components of a high press, attacking football even if the midfielder is not the most mobile. He would certainly be someone that Howe should have a look at as he continues to plot his rebuild.

Rogic was in spectacular form under Rodgers in two and a half years but the trip to the Asia Cup in 2019 seemed to slow Rogic down entirely at Celtic. He returned to the team at the end of the season under Neil Lennon as the interim boss helped win the Treble Treble but required surgery again that summer, which effectively limited his involvement in the Quadruple Treble season. This last season saw Rogic used sparingly, he provided assists in a poor run of form as Celtic’s season tailspun towards mediocrity but the arrival of Howe and his coaching team could rejuvenate Rogic’s Celtic career.

The player has two years left on his deal, he still has a lot to offer and it is promising that he has decided to commit to Celtic in this fashion.