You are at:Home»Latest»Tracing the footsteps of an ‘unknown’ Celtic hero – John William Madden

John William Madden is revered in football circles in Prague and the Czech Republic. This respect and affection is most evident at Slavia Prague, where the “Tribuna Johna Maddena” or “John Madden Stand” bears his name.

He is celebrated as the visionary and leader who transformed Slavia into a professional club with his modern training methods and forward-thinking. He was Slavia coach from 1905-1930, a tenure pretty unthinkable in the modern game, and left an arguably unparalleled legacy on the historical development of football in the Czech lands. 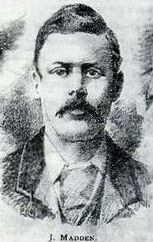 Why is it though, in a football mad country like Scotland, and even among Celtic supporters, despite playing in the club’s first ever team and having a distinguished career at the club, Madden’s story is almost unknown in his country of origin?

I have become more and more intrigued by Madden’s unique journey from the banks of the industrial Clyde to the heart of Bohemia near the turn of the twentieth century. Of course, as a football fan, Madden’s career in the formative years in Scottish and to a lesser extent English football, his arrival at Slavia Prague and his subsequent reign as a totem of the club and of Czech football is fascinating.

For me, however, I find myself more and more fascinated by the human story behind Madden’s journey. This might be because there are obviously some parallels with my own life, geographically at least, as someone from the West of Scotland who has ended up living with lifelong family ties in Bohemia.

I’m even involved in football management, albeit at a slightly lower level than Madden, the ‘B’ team of the mighty FK Radošovice in Division 4B of the Prague-East section of the Central Bohemian Championship! 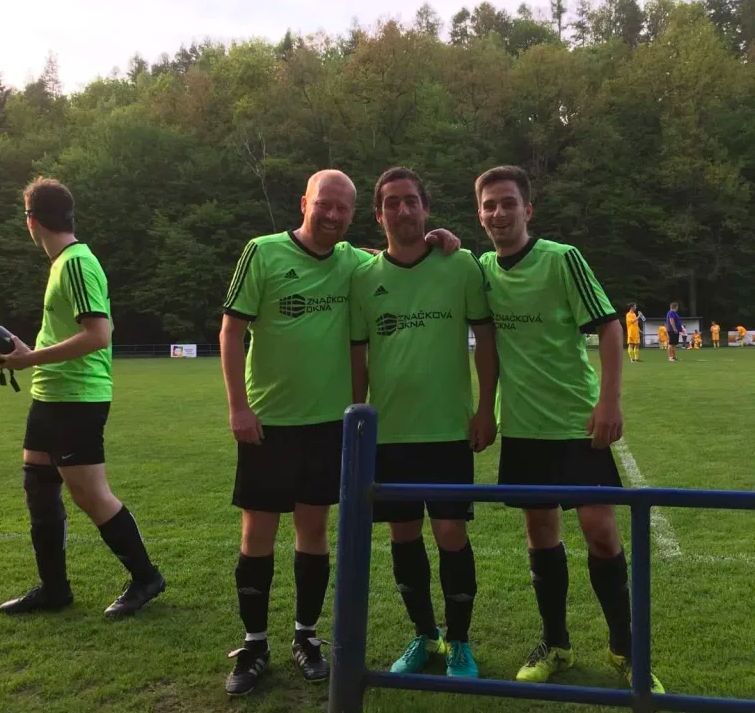 Madden’s life throws up so many questions. What made him come to Prague and what made him stay? What kind of man was he to endure at the club for so long? And what was the background to his life like?

He certainly lived through some historic times. What we do know is that he arrived in what was then one of the great cities of the Austro-Hungarian Empire, and he lived through the First World War and the subsequent formation of the first Czechoslovak Republic.

He then lived through something of a ‘golden age’ in Prague before the tragedy of the Second World War and the Nazi occupation. Madden lived to be an old man and never left Prague. Even his death has something of a historical roundness to it, passing in 1948, the same year when Czechoslovakia became a communist state. 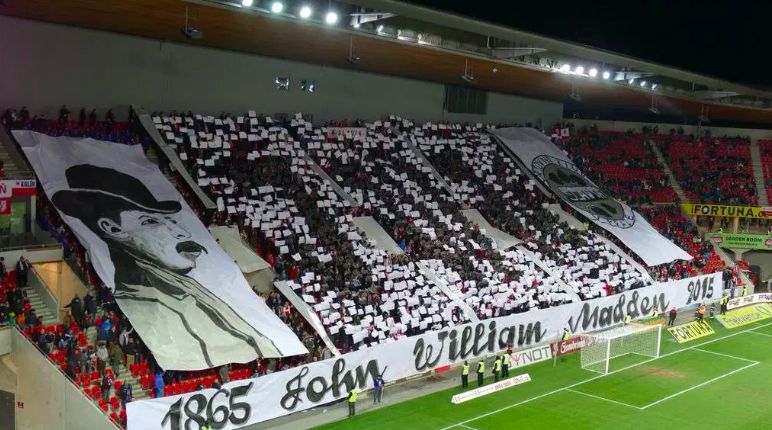 We can find out a lot about Madden, certainly in football terms, online and in other sources and make some assumptions about his life, as all historians do. With a few honourable exceptions, this information has a Czech bias in terms of the quality and volume of information available. There are a few honourable exceptions to this pattern, including the stellar work of The Celtic Wiki and the Celtic Graves Society, the latter of whom organised an event at Madden’s grave in Olšany Cemetery in Prague in April 2017.

Comparing the respective English and Czech language Wikipedia sites (the starting point of any slothful amateur historian) above gives some truth to the above.

The Czech version on the other hand, goes into a great detail about Madden’s footballing life and times in comparatively forensic detail, documenting everything from the church he was baptised to a great deal of information and anecdotes about his career and a player with Celtic and other British-based clubs and his totemic career as Slavia boss. It even includes a fantastic quote which, although I mangle the Czech language on a daily basis, makes my Czech look like something Václav Havel might have written. 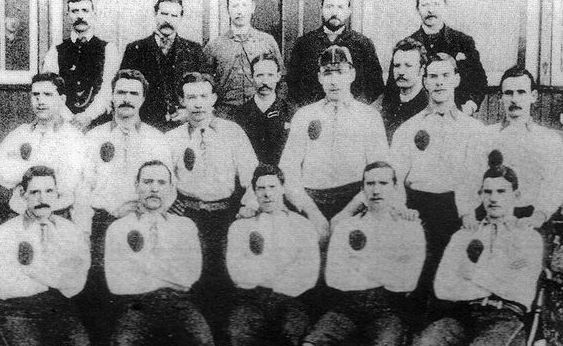 Madden in the first ever Celtic line-up, versus Rangers 1888

I wrote that last sentence with my tongue firmly in cheek, but you may get the point, that Madden’s Czech is even more bizarre than mine. He apparently said:

I tried to translate this with the help of a Czech friend and we came up with this for Madden’s brand of ‘Czeclish”:  “Czech players are no good. They think they know everything. They train a little, then chase girls and go to the pub. They are interested only in having fun and have no energy to play.”

With this attitude it was no wonder he was determined to shake things up.

From looking at the available information online and elsewhere, there are several details we can ascertain about Madden’s life and career. John Madden was born in the town of Dumbarton on 11 June 1865 to Irish immigrant parents. Dumbarton is situated around 21 kilometres from Glasgow on the north bank of the River Clyde and is dominated by the volcanic Dumbarton Rock, which dates back over 300 million years. A bit more recently, in Madden’s time, Dumbarton was a bustling industrial town and a hub of shipbuilding, glassmaking and distilling. Today, the town is probably unwittingly best known in the Czech Republic as being the home of the Ballantine’s whisky distillery.

Putting it mildly, Dumbarton on the turn-of-the-century industrial Clyde, even taking into account the beautiful setting where the Firth of Clyde begins to open out to sea, would have been a very different place to the to city characterised by Gothic, Renaissance and Baroque architecture that Madden would have encountered on his arrival in Prague.

In his football career, Madden was certainly something of a trailblazer, which started in his hometown as Dumbarton FC’s first Catholic player. This might not seem like a big deal, but it might have said something about Madden’s character that he walked into a changing room populated by Scottish Protestants and a time when sectarianism and Anti-Irish sentiment was rife.

Any underlying tensions quickly eased, however, as Madden scored on his debut and became an important player for the “Sons of the Rock.”

Another first, was his appearance for the first ever Celtic team, in which he was part of a team made up entirely of guest players. Madden played centre-forward for Celtic in a 5-2 victory over the team who would later become the club’s historic rivals, Rangers.

Madden eventually joined the ambitious new club in 1889, where according to the Celtic Wiki, he was popular with supporters and team-mates alike, gaining the nickname of “The Rooter” for the power of his shot having the ability to uproot goal nets.

Madden won championship medals in 1892 and 1893 with Celtic and he scored a total of 49 goals in 118 Scottish league and Scottish Cup appearances. He went on to play for Dundee and Tottenham Hotspur until he retired from the game in 1898.

He later took up the role of coach at Slavia in 1905, and revolutionised the game in the Czech lands, with his training methods and tactics, and revolutionary insights to preparation, recovery and conditioning. He was the first real ‘manager’ in Czech football and that is perhaps why his legacy is still so visible today.

As I’ve alluded to above, while Madden’s footballing story is of course a fascinating one, it is the human one behind it that I find so intriguing. Madden’s story has as a background of war and the formation of a state which has now disappeared, a golden age of that state and occupation.

In many ways, Madden’s life story has a movie-like aspect to it. His story at least deserved the documentary treatment from the late, great, Hugh McIlvanney, who produced wonderful films about, amongst others, later Scottish football pioneers like Busby, Shankly and Stein.

The story has everything, from being an immigrant tale, the love story with his Czech wife Františka, where husband and wife were apparently very snappy dressers, to the personal tragedy in the early death by suicide of his only son Jindřich Richard or “Harry”, which the Slavia website attributes to a broken heart.

In later life, Madden even cuts something of a dashing, moustachioed figure, far removed from the relative scrawniness of his youth.

All in all, researching what I could find online has merely whetted my appetite to find out more and try to walk in Madden’s shoes and find out a little more about the man behind the football and the story.

If you have any insight into John Madden’s life, please get in touch as I am looking to do some more research. Please comment below or get in touch at mclaughlintony1@gmail.com or via twitter or facebook.

————
Tony McLaughlin is a Glasgow man living in the town of Říčany on the South-Eastern outskirts of Prague and proud member of the Prague ’67 CSC. He writes about what he feels like writing about and is into current affairs, history, popular culture, sport and music.

ALSO ON JOHN MADDEN ON THE CELTIC STAR…

Tony McLaughlin, a Czech-based Glasgow man who writes about anything that takes his fancy including articles about Celtic FC