You are at:Home»Latest»Transfer Latest: Daizen Maeda deal in final stages so too, Ideguchi and Hatate

According to a report from Yahoo Japan, the transfer of Daizen Maeda to Celtic is in its final stages ahead of the January transfer window opening in a few weeks time. The news comes after numerous reports linking the Japanese striker to the Parkhead club since Ange Postecoglou became manager.

Celtic are relatively light on options up top, with new signing Giorgos Giakoumakis struggling with injuries since he arrived and Albian Ajeti unable to perform to the levels required for an Angeball forward player. With injuries continuing to plague our season it is no wonder recruits are being targeted early to help bear the brunt of a back breaking schedule. 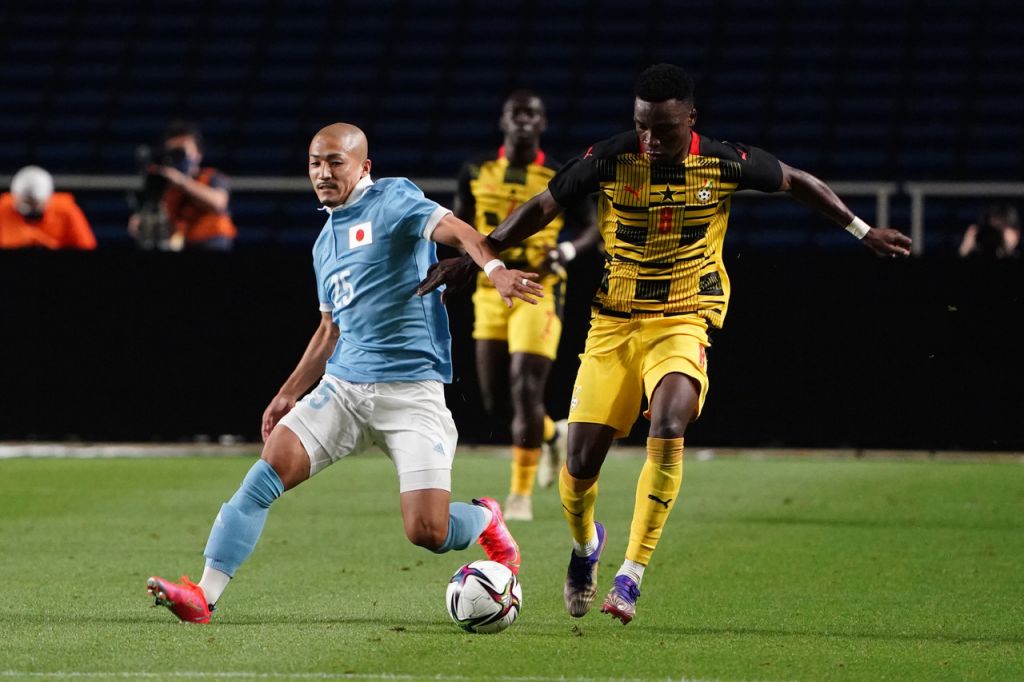 Daizen Maeda of Japan and Sabit Abdulai of Ghana compete for the ball during the U-24 international friendly match between Japan and Ghana at the Best Denki Stadium on June 5, 2021 in Fukuoka, Japan. (Photo by Koji Watanabe/Getty Images)

Maeda is joint top scorer in Japan at present, and the Yahoo Japan report states that a loan deal with an option to buy for around 200 million yen or £1.5 million has entered the final stages of being completed. The striker looks physical and aggressive which will be a welcome change in the striking department as we have an annoying knack of being too nice at times in front of goal.

Hopefully Daizen Maeda can sort all that and be the ruthlessly physical piece of the Ange Postecoglou revolution jigsaw we sorely need. We will know in a few weeks time just how accurate these reports are, but in the meantime we need to sit tight and support the team through an extremely difficult period in the season.

And alongside Kyogo, Maeda might have plenty of company at Celtic next month. This report on 47 NEWS states that “Celtic to win Daizen Maeda Yosuke Ideguchi and Reo Hatate”.

“On the 4th, Celtic of the Scottish Premier League of soccer has embarked on the acquisition of Yokohama F. Marinos FW Daizen Maeda (24), Gamba Osaka midfielder Yosuke Ideguchi (25), and Kawasaki midfielder Reo Hatate (24), I understood from the story of the person concerned. Yokohama M and Gamba Osaka respect their wishes and are willing to negotiate positively.

“It is unusual for an overseas club to aim for three Japanese players at once. Postecoglou, who led Yokohama F. Marinos for three and a half years and moved to Celtic in June, highly praised the J-League players, and Kyogo Furuhashi, who joined from Kobe this season, is also playing an active role.”

At first glance I think it’s kind of insane b/c I still remember when Ideguchi threw his international career away with the Leeds thing.

But when Japan’s biggest news agency reports it all & cites sources, they have my attention.https://t.co/KrBtIQkwR2