You are at:Home»Latest»Trondheim Diary: Good things come to those who wait, ‘This is the day when we win away!’

5.30am Thursday. Through security and seated at my normal Table 45 in the bar at Glasgow Airport with my world-class athlete’s breakfast, a pint of Guinness and a roll and sausage. 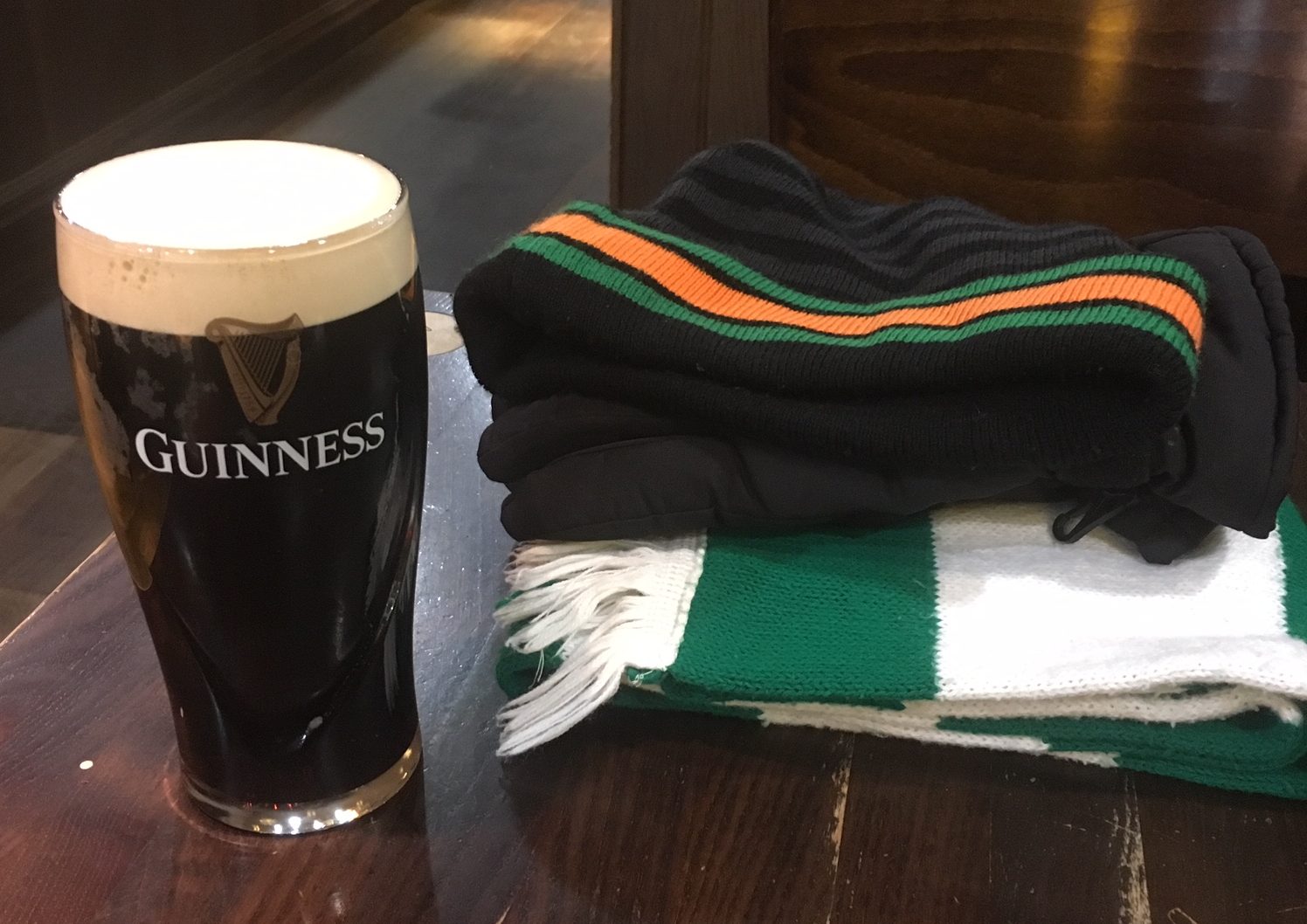 It’s Groundhog Day and time to start work on my new mystery novel. Working title: “Who the **** gets up at 4am to go to Norway in late November?”

Well, looking around me, quite a few other maniacs is the answer, as the bar quickly fills up with the green and white hordes, awaiting the 7am departure to Trondheim on the official fan charter.

I see the usual faces. Old pal Gerry Conway from the Cairn CSC is there, as always, greeting me with a warm handshake.

So is ‘Big Alex’, an acquaintance of Gerry’s from central Scotland, who I last saw in Paris, at lunch before the world’s longest Mikael Lustig singalong, in the Place de Clichy. I first met him in Turin, when I was seated next to him in the stadium with my daughter for the Champions League Last 16 game, a few years ago.

Despite being stone-cold sober, I believed he was someone else and happily conversed with him for the entire evening on that basis. Not my finest hour. Hopefully he’s forgotten that, although my daughter never allows me to. There are a few other familiar faces, some of whom exchange nods.

They are a special group, the Celtic diehards. Given our European away record, as a relative part-timer, I am always in awe of their total commitment. 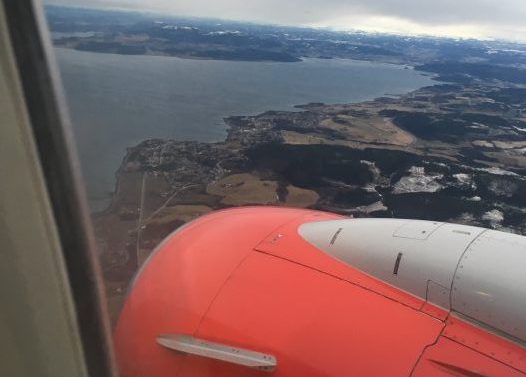 The Jet2 flight is quick and largely uneventful. From my window seat above the wing, I catch my first sight of November Norwegian land. Desolate, with little sign of life at this stage. All fjords, mountains and snow.

However, soon it is looking more promising, picturesque and similar to Tromsø, which I visited in June. We then have a slightly unusual landing, to say the least, as the plane drops and twists over a wide stretch of water at what feels like about six feet from the surface.

There are some nervous smiles exchanged before the pilot pulls the jet to a halt. The landing is greeted with a mixture of relief, applause and laughter, as the guys at the back of the cabin break into the immortal words of a current Celtic classic, ‘doo doo doo da roo….”. Welcome to Trondheim, Celtic-style.

It’s a home from home on the coach, as Radio Trondheim is belting out some classic Irish ballads. I suspect that the driver’s entertainment system has been hacked by persons unknown (The Unseen Hand). 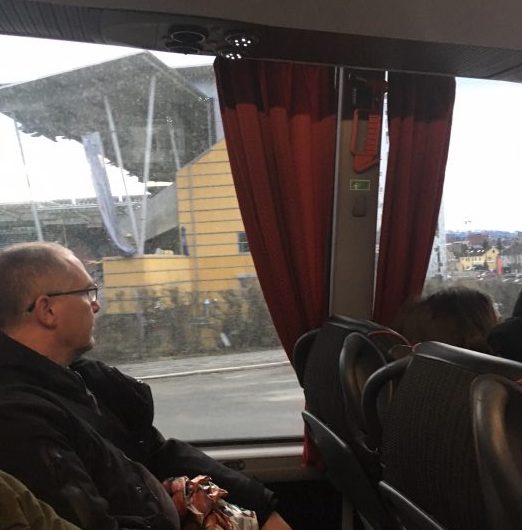 We are advised that the bus will drive past the stadium, so that we can get our bearings and pick-up point for later, before heading into the city. Good idea. I am surprised that the Lerkendal is actually on the main road. For some reason, I had always pictured it in the middle of some leafy, suburban park.

The coach carries on into central Trondheim. I pick out a nice Irish bar/restaurant, which will do as Base Camp 1, and another nearer the stadium, for later. I love it when a plan comes together. We are dropped off centrally and I am quickly off and running to O’Leary’s. It is absolutely Baltic and I am thankful for the additional layers I threw on at silly o’clock this morning. 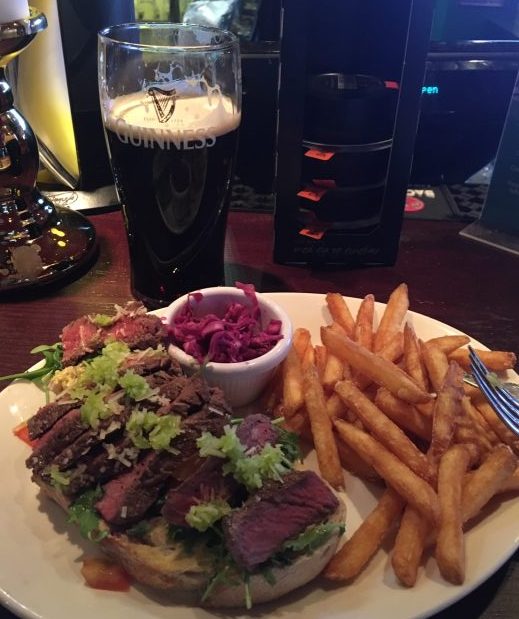 I have beaten the crowd and today I will be the Barfly CSC, perched in O’Leary’s. I am greeted by Greta, the barmaid, who I suspect has no idea what is about to hit her pub over the course of the day. I order a Guinness and some food, a steak sandwich. I have clocked the prices and I plan for a later shift washing dishes to cover my bill here. It is over £11 for my pint and £20 for the sandwich. The mystery of the severe lack of chubby Scandinavians is solved in one fell swoop.

Soon I am joined by the other survivors of the Trondheim landing. My barstool is in a great position to chill out and people-watch and, as always, I meet some interesting characters.

The first guy is obviously from the Entrepeneurs CSC, as he tells me he is about to negotiate a price for alcohol on the basis that ‘we will be here all day’. He returns my surprised look with a knowing smile. ‘I did this here the last time’.

Presumably, Greta was not on duty that day, as she gives him an incredulous look before chasing him for his life. There will no happy hour today in O’Leary’s. It’s dig deep or stay sober or….more of that later. 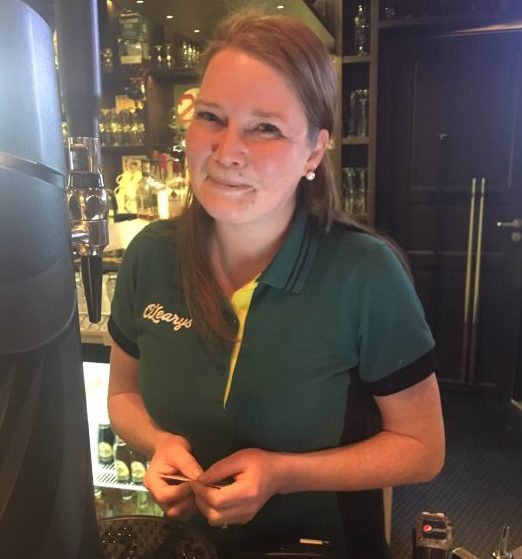 Next up is a young guy I recognise from the plane. He was seated with his dad on my row. He has come fully organised with a playlist, which is then presented to and accepted by Greta, although minus the enthusiasm which would suggest that such requests are welcome. In any case, soon we are in Full Wolfers Mode.

There is a stunning young lady who has a brilliant party-trick. I watch as she nonchalantly balances four pints of lager on her palm then calmly walks across the pub to take her seat. Where has she been all my life? I want to capture this moment on my mobile for posterity but lack the required level of Norwegian courage at this stage.

There is a nice vibe in O’Leary’s as the afternoon progresses, although the expression on Celtic faces as they enquire on the cost of a pint is, if you’ll pardon the pun, priceless. Poor Greta is growing weary of using her stock response, ‘this is Norway’. As always, there is a Plan B, and I am suddenly aware of an upsurge in rounds which don’t involve the purchase of alcohol. Where there’s a will.

The boys from the Airdrie Neil Lennon CSC are here and in good voice, surrounded by their massive banner. This could be the Gallowgate or the Gorbals. They’re here and they’re always here. 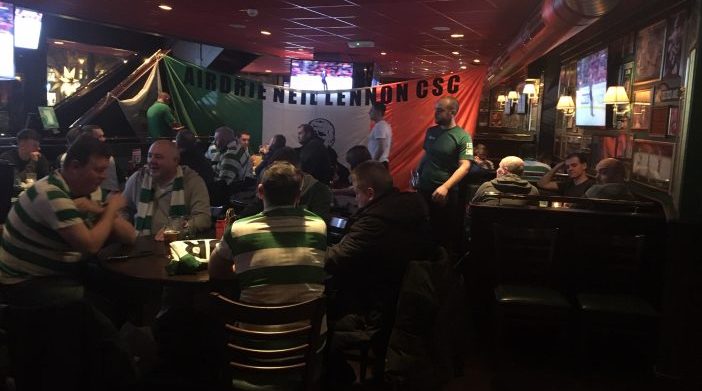 I meet Bob, a lovely man from Portsmouth, who tells me that he recently lost his wife and had promised himself to get to a few European trips. He makes the journey from England’s south coast to Celtic Park every fortnight without fail. As I said earlier, there are some unsung heroes out there.

At the other edge of the age spectrum is a young girl from Fort William. This is her first trip abroad with Celtic and she is with her dad. We have a long chat at the bar, about everything and nothing. She is funny, polite and really good company. He should be very proud.

After the umpteenth request, Greta has now lost what little patience she had with our young would-be DJ and his written notes are now snatched from him silently. Whilst I am desperate to discover who snaps first to win this battle of nerves, time is marching on and I decide to make tracks towards the stadium.

Before I leave, I make a quick detour to the loos. The gents has the usual sign on the door, to help prospective guests identify the correct option. However, the one on the ladies’ door is a bit more graphic and worthy of mention, although I’m not sure it would catch on in Glasgow. In the interests of decency, I think I’ll just post the photo and leave it at that. 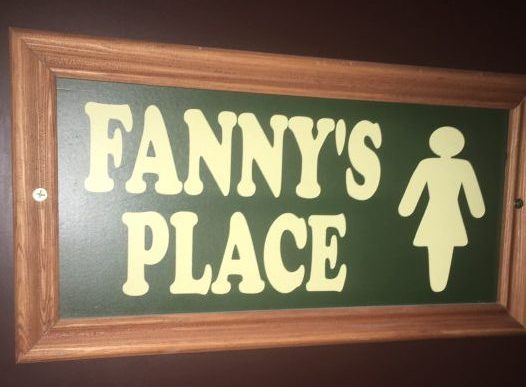 I stop off at Café Dublin for a journey-breaker. Again, it is really busy, although there appears to be a bigger mix of Celtic and Rosenborg supporters in here. There is a fantastic banner on display on the far wall, declaring that ‘Oppression breeds Resistance’. I’m curious to know the origins of that.

I’ve had a few beers by this time but it’s nice to know I’m still relatively sober. I get a chuckle when a guy approaches me at the bar. He can’t get over the fact that there are girls from Norway in the pub. Who would have thought it? Norwegian people in a bar in…er…Norway. ‘Time to go’, I think.

Enquiring about the distance to the ground, I am offered a lift by a young Celtic couple, bedecked in matching Hoops. I politely decline. The munchies have set in and I fancy grabbing something on the walk to the stadium.

Although it’s dark, misty and cold, after an afternoon in the pub, the walk to the ground is actually quite enjoyable. 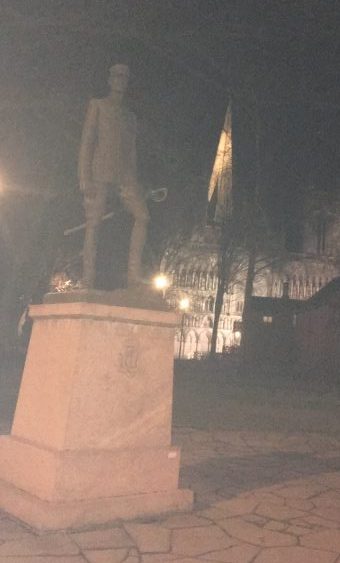 I pass the old cathedral, the Nidaros Domkirke, cross the main river, the Nidalva, and soon I am approaching the stadium. At the ground, I finally strike gold in my search for food, the wonderfully-named Dolly Dimples pizzeria, which is actually built into one of the stands.

It’s really busy with Rosenborg supporters, however, there’s a small oasis of green and white in one corner, where for the third Group Match running, I bump into Graham from the Leder Hosen CSC. The photo from Salzburg is passed around once more, raising a laugh as pizza and beer are ordered. Perfect. 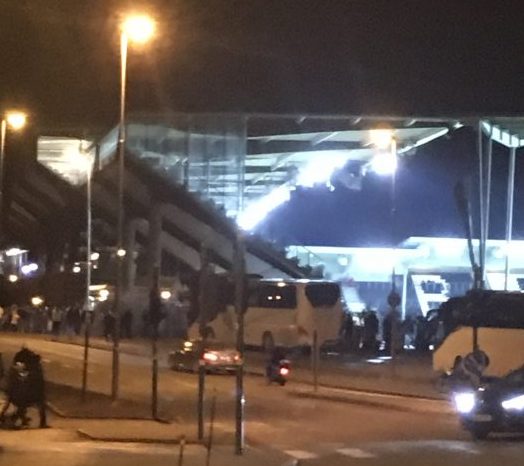 Time for the match. In contrast to the events in Leipzig, entry to the Lerkendal must be amongst the easiest ever. Within minutes, I am standing amongst the faithful, awaiting the arrival of the teams. The Celts come out, lighting up the gloom in their Dortmund-esque third kit and the game is on.

This is feeling different tonight. Celtic are spraying the ball about confidently. The atmosphere in the home stands is low-key and resigned and any noise is coming from around me. There is a feeling of inevitability about a Celtic goal but if anything, history has taught me to be cautious. Games can change in a heartbeat. 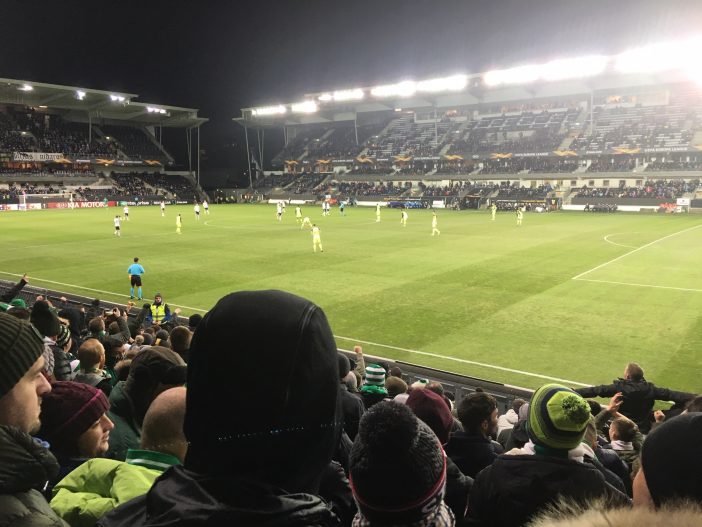 Heading towards half-time and Celtic are breaking at pace in the opposite corner of the pitch. Suddenly the ball is dropping across the face of the goal to the far post, where Scott Sinclair is waiting. A nod of the coiffured head and Celtic are in front. Half-time. 1-0. So far so good.

The main second half action is now in taking place closer to us, which is great. Celtic are in control but I want a second so that we can relax a bit. There are near things but no more goals. A few scares but it’s still feeling like our night. Don’t say that. You know what happens when you say that.

Then there’s a roar around us. Not quite Love St, May 3 1986, but a roar nevertheless. Word is that Salzburg have scored and are beating Leipzig. This is good news. Not long left now. C’mon Celtic. 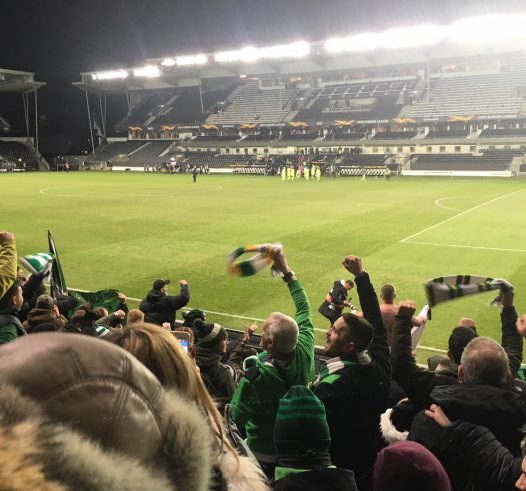 The referee has blown for full-time and finally, finally, this is the day that we won away. And there are forty verses of the song being sung around me as the players head over to us for the traditional acknowledgement, win, lose or draw.

Trondheim Diary: Good things come to those who wait, 'This is the day when we win away!'…https://t.co/0qMe2VkXHp pic.twitter.com/b00Q6ww31Z 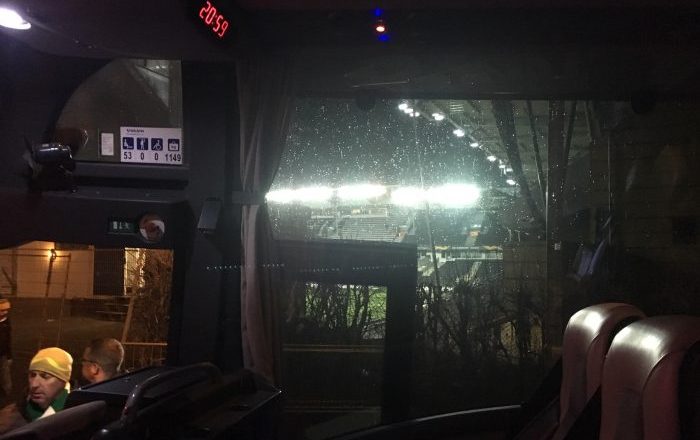 But tonight we have won and it feels like nothing else in the world. We are in control of our own destiny in the most difficult of sections. It will go to the last day.

Previous ArticleThe Bhoys of the Young Brigade! Ronny Roars Again!
Next Article Jim Craig – The ‘first of the 6-2’ game