You are at:Home»Latest»Twenty five years ago today the Temporary Stand was Opened to the Elements

And since we are talking about the late-great Tommy Burns team of the 1996/97 season – see Conall McGinty’s article on The Celtic Star titled Postecoglou’s Celtic Mirrors the attack-minded Tommy Burns team of 1996/97…here’s this team in action on this day 25 years ago in 1996.

A quarter century ago, Celtic dismantled Dunfermline at Celtic Park thanks to goals from Jorge Cadete, Paolo Di Canio (2), and Big Pierre with a double too. In front of a newly refurbished Paradise, Tommy Burns’ Celtic side cruised past the Pars with ease. A fitting inaugural performance to mark the opening of a new stand. 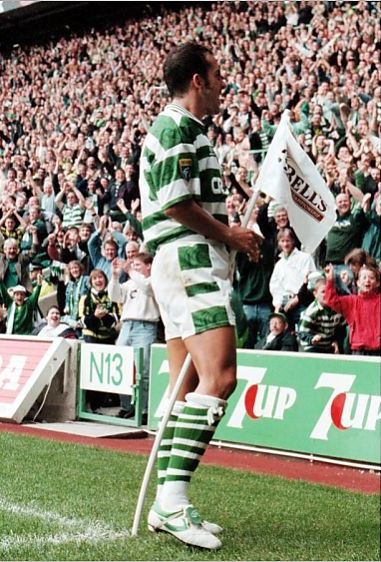 Cadete opened the scoring with a delightful touch near the by-line to knock the ball past the on-rushing Dunfermline goalkeeper, before knocking the ball home from a tight angle.

This was then followed up with a Cadete slide pass for maverick Italian, Di Canio, who scooped the ball over the ‘keeper in his fancy white boots.

A cross which Cadete tried to acrobatically kick failed, but landed to Di Canio again who had no problem taking a touch and finishing neatly to put the Celts in cruise control.

Pierre then thought he would get in on the action with a penalty, after Portuguese forward Cadete was cynically brought down in the box – he skied it however!

Di Canio would ensure his bug team-mate would get on the scoresheet though; following a slalom through the Dunfermline midfield, he slipped in Van Hooijdonk, who made no mistake in finding the net.

The Dutchman would go onto cap the afternoon off in style, with a trademark Pierre free-kick that fired over the wall and past the helpless Pars’ goalkeeper.

A fine result befitting a new look Celtic Park. Enjoy the action in the highlights below…