It’s Unique Angle time and once again it’s a difficult editing task for the hard-working team at Celtic TV as they’ve had to cram 19 Celtic goals over two games – in four days – without reply – in two competitions, the Scottish Cup the SWPL and yesterday’s magnificent seven, it’s worthing noting featured goalscorers from five different countries.

🇳🇿🇮🇸🏴󠁧󠁢󠁳󠁣󠁴󠁿🏴󠁧󠁢󠁥󠁮󠁧󠁿🇮🇪
Five nationalities on the scoresheet yesterday as we returned to SWPL1 duty!

Here’s the 12 goals scored in midweek versus Edinburgh City in the Scottish Cup, Celtic now face theRangers in the next round next month!

Head Coach Fran Alonso has been praising the bounebackability of his team, as Celtic responded from a disappointing draw with Hibs last weekend with a stunning 7-0 win against Partick Thistle in SWPL1 yesterday.

‘Fantastic performance from the Ghirls, full of desire, hard work and determination…. plenty of goals too! Delighted with the way this TEAM Green heart always bounce back from disappointment!!’

Fantastic performance from the Ghirls, full of desire, hard work and determination…. plenty of goals too!

Delighted with the way this TEAM 💚 always bounce back from disappointment!!

Celtic were on fire yesterday and had the game sewn up by half-time with as good a team performance, in that opening half in particular that saw the Hoops hit five without reply, as any in game this season.

There were of course standout performers. Chloe Craig for instance was probably the player of the match and was cruelly denied a hat-trick by an offside flag, and in the opening spells of the game Jacynta continued her impressive form this season and was a constant thorn in the side of the Partick Thistle defence. Meanwhile Olivia Chance both created and scored in a performance as good as the playmaker has produced all season and Charlie Wellings was always going to get in on the act too, and she did so with an incredible 22-yard shot that flew into the roof of the net.

A special mention must also go to Maria Olafsdottir-Gros, who scored two and was always a threat on Celtic’s right wing. Post-game the young winger reflected on her time with Celtic and said she was only now finding her rhythm. Yesterday saw the youngster grab her third goal in two games and if Celtic are looking to push on with a genuine title challenge, a spread of goals from around the team including Maria, will be vital in the weeks and months ahead –

“When I joined Celtic, my goal was to get a lot of goals – it didn’t really happen at the start but I think I’ve found my rhythm”...

🎥 “When I joined Celtic, my goal was to get a lot of goals – it didn’t really happen at the start but I think I’ve found my rhythm”

Although yesterday’s win will have eaten into the goal difference, in the end it had little impact on the points difference at the top of SWPL1. Glasgow City as expected emerged with a comfortable 4-0 win against Spartans, meanwhile theRangers responded from being a goal down to defeat Hibs.

For Celtic however what those teams above then do or don’t do should have no impact on them, after all that is something Fran Alonso and his side have no control over. What they can influence is how they go about their own business, and if they continue the form exhibited in yesterday’s incredible 7-0 win against Partick Thistle, you can be sure their performances will exert the necessary pressure on the teams above them in the table. 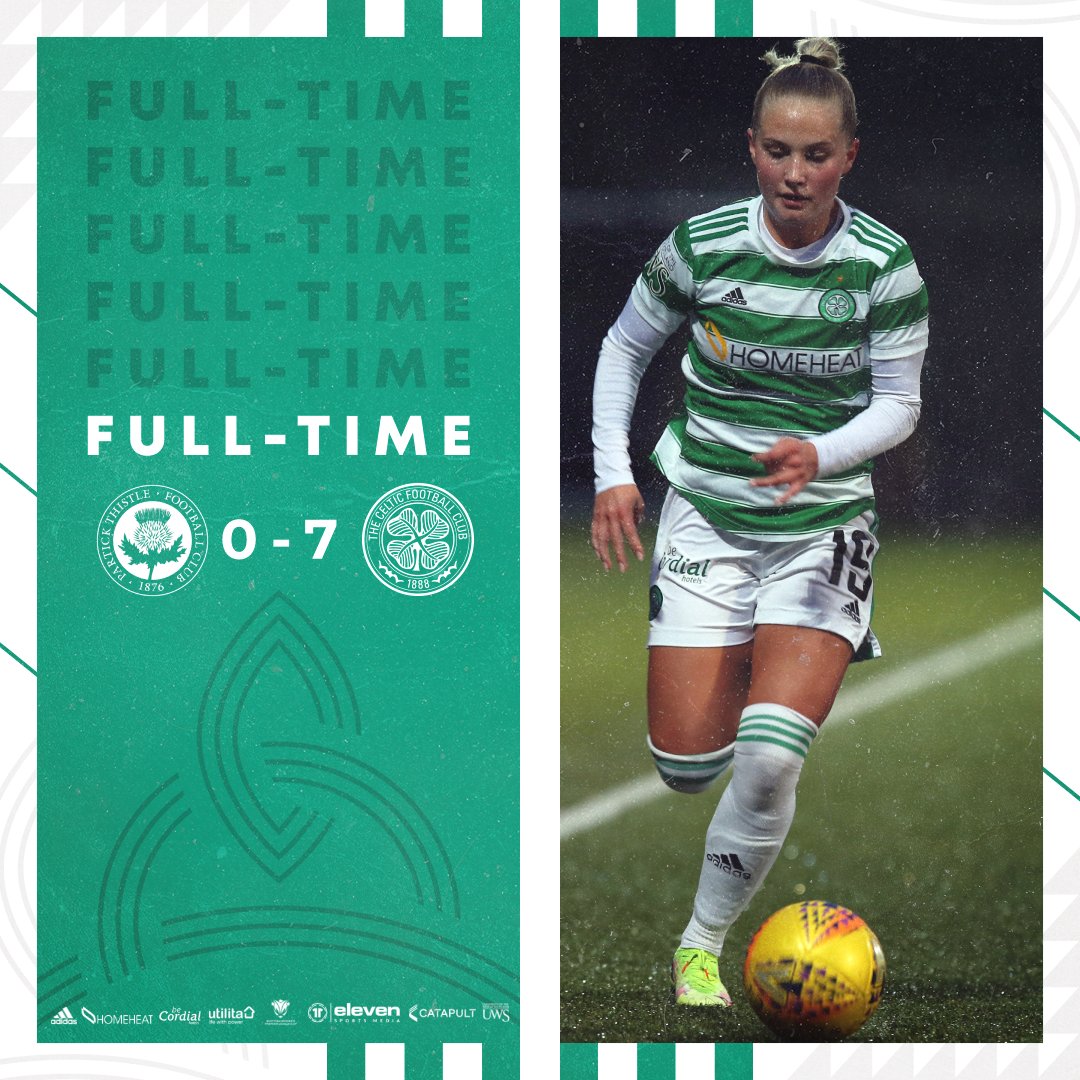 New goalkeeper Anna Vincenti went straight into the starting eleven for Celtic for this afternoon’s SWPL1 encounter with Partick Thistle at Petershill Park, and if you didn’t know we’d signed a new player, you’re not the only one, with Celtic apparently keeping the former Olympic skier and ex Hibs and Motherwell ‘keeper under wraps prior to announcing the starting line-up.

In truth however Celtic had little need for a goalkeeper at all this afternoon, such was the level of attacking football produced by Fran Alonso’s team and as such Vincenti had a relaxed debut for the Hoops.

After a disappointing 1-1 draw away to Hibs last week, Celtic had got their shooting boots back on with a confidence building 12-0 Scottish Cup win over Edinburgh City in midweek. An ideal preparation then for a game against Thistle where three points were essential and goals would be an added assistance in the Hoops attempts to close the points gap and the goal difference on Glasgow City and theRangers at the top of the SWPL1 league table.

And when it came to goals Celtic didn’t disappoint today, with a fluent and clinical performance that saw the Celts to pick up where they left off against Edinburgh City in midweek. Celtic were already five goals up without response at the break as an inspired team performance had Thistle chasing shadows.

Celtic opened the scoring in the 16th minute as Jacynta found Chloe Craig down Celtic’s left flank and Craig in turn picked out Oloivia Chance just inside the area. Chance then produced a double drag back to send four Thistle defenders for an early pie before floating a wonderfully angled floated finish into the net.

Within six minutes Celtic had added a second as Sarah Harkes released Jacynta and her excellent drive was parried well by the ‘keeper only for a composed Gros to take a touch, evade the keeper and prod the ball home.

On the half hour and Gros turned provider, evading defensive attention before delivering the ball into the box, Thistle’s efforts to clear reached only as far as Olivia Chance who sent in a tidy delivery into the six-yard box, where the ball was met deftly by the head of Chloe Craig and the ball struck the underside of the crossbar before crossing the line to put Celtic three goals up.

Eight minutes later and Celtic were four up and this one was the team goal of the afternoon, with some wonderful 1-2 football in the build-up eventually reaching Olivia Chance who found Charlie Wellings breaking into the area and the striker selflessly played the ball across the goal where Gros was there to tap home her second and Celtic’s fourth of the first half.

If there were any doubts left at all as to where the points were heading, Celtic put the game well out of sight just before half time, as a poor pass from midfield was intercepted by the excellent Chloe Craig, who laid the ball off to Charlie Wellings and continued her run. Wellings picked her teammate out superbly and Craig slid the ball under the advancing ‘keeper to ensure Celtic went in with a 5-0 half time lead.

It was a scintillating half of football with Jacynta, Harkes and Chance all impressing and young Olafsdottir-Gros also catching the eye; however, Chloe Craig was the best of the bunch. Indeed, the only surprise in a game with five first half goals was that Charlie Wellings hadn’t scored at least one.

That was immediately remedied at the start of the second half as Wellings scored her 23rd goal of the season in just 21 games as she used the decoy run of Chloe Craig to hit a 22-yard screaming effort that flew into the top of the net to put Celtic 6-0 up. It was a superb individual effort from a player who had scored a hat-trick against Thistle earlier in the season, and nearly scored a second soon after, rounding the goalkeeper before Thistle’s Freya MacDonald cleared Wellings shot off the line.

It was a quieter second half for Celtic as Thistle played with a higher defensive line and managed to be more competitive as a result, while also managing the space in behind they were surrendering as a result very well indeed. It made for a far more competitive second period, however Celtic were still the better side and Chloe Craig almost completed her hat-trick with a fine lobbed finish only to be denied by an offside flag.

With 65 minutes gone Fran Alonso took the opportunity to make a triple substitution as Hayes, Toland and Jacynta made way for Warrington, Shen and Atkinson as Alonso looked to take advantage of the scoreline and rotate his side, and ten minutes later also introduced Abbie Ferguson and Tegan Bowie as Olivia Shorts and the excellent Olivia Chance made way.

And it was substitute Atkinson who had the biggest impact as after Shen found Wellings in space, the striker picked out Atkinson running beyond and the attacker hit a low drive into the net to complete the scoring with her first league goal of the season and Celtic’s seventh of a highly impressive afternoon’s work.

Fran Alonso will have been delighted with the first half performance in particular, with the performance only really dropping off in the second half when Alonso changed half the outfield players. Chloe Craig was certainly player of the match, but in truth this was an excellent all-round team performance and one that Fran Alonso will rightly be proud of.