You are at:Home»Latest»Unlike the Green Brigade, not every Celtic fan has a PHD in Irish History

The official SPFL highlights start with the Remembrance Minute’s Silence being disrupted and yet again at this time of year – on Celtic’s birthday weekend – our club gets a kicking because some can’t find it in themselves to protest in another way.

Celtic have met them more than half way, by refusing to place a poppy on the Celtic shirts as had happened previously. Every year we go through this but why given them a reason to attack Celtic? Just observe the silence and move on – even sing whichever the song you want to as a counter-reaction to the silence as soon as it’s done.

Someone said on here that no blog or supporter has any right whatsoever to criticise those making the protest in breaching the silence, even though these supporters are as embarrassed as the club clearly is by the ‘look at me’ protestors. 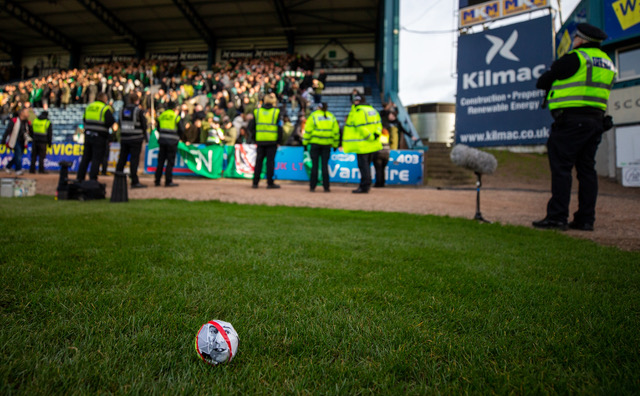 7th November 2021; Dens Park, Dundee, Scotland: Scottish Premiership football, Dundee FC versus Celtic; Close up of one of the tennis balls used to disrupt the match, featuring the face of Bernard Higgins who has been linked to a Celtic role

A few years ago those wishing to protest waited outside the ground while the silence was happening. Fair enough. Last week the Green Brigade and The Bhoys remained silent for 30 minutes in protest against the rumoured Higgins appointment (still neither confirmed or denied by Celtic). Again fair enough, they have every right to stay silent if they wish, yet when the rest of the support wanted just one minute’s silence yesterday they could not oblige.

Many understand that the tennis balls protest was valid – although the breach of the minute’s silence took the focus away from that one on what was a busy afternoon for the protestors.

Many Celtic families lost relations fighting in the World Wars, the Second World War being closer to fathers and grandfathers of folk at Dens Park yesterday wearing a Celtic scarf. While we all know that you need a PHD in Irish history to gain membership of the Celtic Ultra groups – imagine them on Mastermind, they’d be a certainty on their chosen specialist subject – they have around 90 minutes over 50 times a season to turn their comprehensive knowledge into song.

The rest of us just want one minute of peace and quiet so that Celtic families and families of our former players who fought in the World Wars, fighting and defeating fascism in the 1939-45 conflict can be remembered.

Maybe it’s time Celtic reviewed the allocation of away day tickets to spread them around the season ticket holders rather than simply giving favourable treatment to same group every single away game?

I could not agree more, but it seems since Lawwell left no-one in authority at Celtic will stand up to these ‘Attention Seekers’. The Irish fans, like most supporters I know are embarrassed and fed-up by the GB., who are made up of young guys who know little of Irish history, but continue to use our beloved club as a vehicle for their self-indulgent bigotry. Their ‘No-one likes us, we don’t care’ attitude seems very familiar.

Thanks for this article – it will be slated by some and certainly on the Celtic forums where a minority bully and mock those who have a thoughtful view on all things related to our great club. The article was spot on and reflects what I believe is the view of the vast majority of fans.

I remember being in the Jungle when the Malvinas chants caused the fans to fight amongst themselves because many had friends or family serving out there. Regardless of the rights or wrongs of the war it was still their sons, brothers, uncles, fathers and maybe even sisters who were out there.

Previous Article“We’ve got someone twice as good. We’ve got Harry Hood!” – out now!
Next Article Neil Lennon received £600k pay-off from Celtic