You are at:Home»Latest»Unlucky Celtic defeated by Hibs in Scottish Women’s Premier League

CELTIC lost out to Hibs by 3-1 in the top of the league home fixture at K-Park Training Academy in East Kilbride. The Celtic side went into this fixture full of confidence after an excellent unbeaten start to the summer season in the Scottish Building Society Scottish Women’s Premier League one.

In the traditional Celtic style, the team attacked Hibs from the start and the high-tempo football had the more experienced Hibs side on the back foot. But the side failed to take advantage of their good play by putting the ball in the back of the visitors net when on top in the match and they were inevitably punished for it. 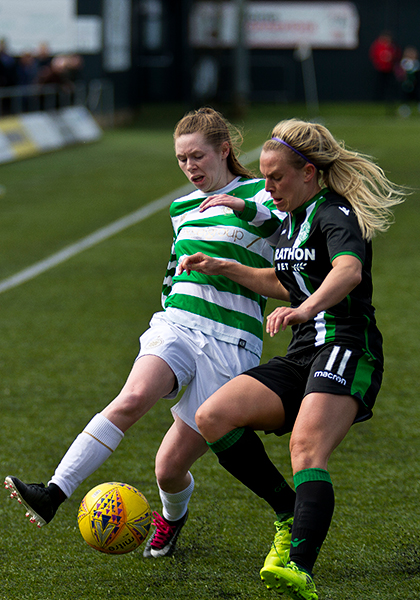 Early Celtic pressure from the kick-off almost gave them an early lead, when Rachel Donaldson blasted a shot gdalbound but the Hibs keeper, Fife, got a fingertip to it to touch it over the crossbar.

Natalie Ross and Heather Richards  were bossing the centre of the park for Celtic and Nicole Pullar and Sarah Ewens were causing the Hibs defence all sorts of problems with their lively play.

However Hibs gradually weathered the early Celtic storm to come into the game and they got the opening goal on 24 minutes when a free kick was delivered perfectly into the Celtic box – Brownie headed back across the Celtic goal and McLaughlin had the easiest of tasks to score and give Hibs the lead.

The play raged from end to end after that but with five minutes to half time Hibs almost grabbed a second, they actually had three attempts in quick succession but somehow Celtic cleared the danger and went in at the interval just the one goal down.

The second half started like the first with Celtic forcing Hibs back as they searched for an equaliser. However Hibs in their first visit into the Celtic half doubled their lead when McLaughlin beat the Celtic defence and scored her second goal of the day. 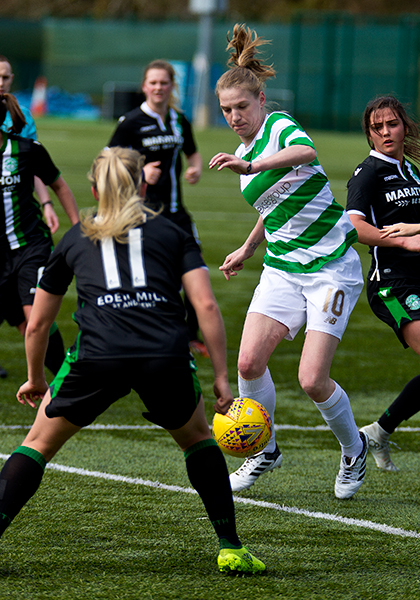 The Celtic heads didn’t drop though, indeed they seemed to raise their game and it was no surprise when Nicole Pullar headed into the Hibs net to reduce their lead on 52 minutes.

After fine play  from Celtic full back Keeva Keenan, Fife made a save but the ball rebounded high into the air and Pullar was on hand to head it home for the Celtic team.

Hibs were rattled and Celtic pressed hard for an equaliser that would have been richly deserved. The goal looked certain on 64 minutes  when Pullar headed the ball over the advancing goalkeeper only to see the ball cleared from the line. Frustratingly Ewens picked up the loose ball but her shot was also cleared on the goal line. Hibs were holding on by the skin of their teeth and then with five minutes left they won a few corners, which took the sting out of the Celtic threat. Indeed it was worse than that as Harrison got a shot away and it made its way into the far corner of the Celtic goals to secure the points for Hibs

For Celtic it was ultimately a disappointing afternoon against an experienced Hibs side.  Kiera Gibson had a good game in the Celtic goals, , Colette Cavanagh ,  Nicole Pullar and Player of the Match, Natalie Ross all can be proud of their performances.

Previous ArticleCeltic’s crazy Birthday Party! Were you at Paradise on this day in 1988?
Next Article Glasgow Derby Transport chaos, Dalmarnock and Bridgeton stations closed on Sunday