You are at:Home»Latest»VAR means the end of ‘Honest Mistakes’ – no wonder Celtic boss is keen

I remember reading some years before they went bust, that Rangers had played the most minutes of football in the European Cup/Champions League without actually winning it.

The most successful triers in the world…

There is a view held by many Celtic supporters that Rangers struggled on a level playing field in European football where they didn’t have the advantage of their pals – referees like Hugh Dallas for instance – who could always be relied upon for an Honest Mistake or two.

A perfect example would be Dallas over-ruling a goal-kick at Tynecastle in a crucial match against Rangers to award them a penalty for a push. The Hearts player was nowhere near the Rangers forward as the ball flew over both their heads and out for a goal-kick. The linesman gave the correct decision then Dallas changed his mind and pointed to the spot. There were minutes remaining, the penalty was scored and that gave Rangers the vital win.

That decision influenced the destination of the league flag that season. It could just have been an honest mistake, these things happen, they even themselves out etc (yeah, right). If VAR was about in those days, surely it could not have been given?

Remember Craig Levein’s rant when he took Dundee United to Ibrox and Rangers needed the win as the title race with Celtic was in full flow?

Here’s what Levein said after the match which saw the most blatant series of Honest Mistakes – all of which favoured Rangers and helped their title aspirations. Levein said that there was no point in Dundee United turning up as there was ‘NO WAY’ they could in that game. Watch the video:

Brendan Rodgers doesn’t need to talk about the era of Honest Mistakes.

Incidentally when Celtic established a large lead in the league the Honest Mistakers would turn their attention to the Cups – Ronny Deila’s side against Inverness Caley Thistle in the semi-final of the Scottish Cup is a good example of that.

Celtic have had one or two decisions themselves over the years, usually awarded at non critical moments in matches. Many Rangers fans point to the outrage at Joe Miller’s goal in the 1989 Scottish Cup Final as an example of a critical pro-Celtic honest mistake – he got a throw-in near the half way line that probably should have gone the other way.

So the Celtic manager, without saying anything on these matters, will be well aware of the potential benefits to Celtic by the introduction of VAR into the Scottish game.

Those that have used or benefited from the honest mistake culture over the years will no doubt provide resistance to its introduction. They haven’t said so yet but we would hardly be surprised if various arguments against its introduction are not put forward in the season ahead. 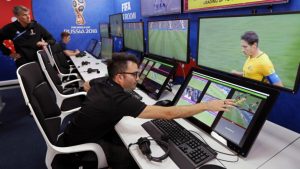 Here’s what the Celtic manager thinks of VAR.

“I think it has shown that it can work and work well.

“Of course, there’s a huge investment needed for it, but I thought VAR worked very well at the World Cup. We were probably all a little bit sceptical of it at the beginning, after seeing it in England earlier in the season.

“There was one Liverpool game where there was a delay for seven minutes. People were waiting when it was in the middle of the winter which wasn’t ideal.

“But in Russia is was very slick, in the main, and a lot of the decisions were correct and it didn’t really alter the flow of the game.

“So, I think it worked very well. However, there is obviously a bit financial implication involved in it.”

The broadcasters could and should be asked to include VAR facilities for the Scottish game within the next round of TV deals which are just around the corner.

It makes a great deal of sense for the broadcasters as they will be critical to the matches and its introduction will integrate them within the structure of the game going forward.

No Celtic supporter will think we have anything to fear from the correct decision being made and the removal of the honest mistakes from our game.

VAR does that and should be supported.