You are at:Home»Latest»Video: Lennon and McGregor preview Sunday’s Final

Neil Lennon & Callum McGregor were on Media Conference duties ahead of Sunday’s Scottish Cup Final versus Hearts. The showpiece Final, rescheduled from May, will see the 2019 Finalists come up against each other once again at The National Stadium.

Lennon was appointed following the 2-1 win over the Tynecastle outfit and he is looking forward to have the opportunity to become the first person to win a Treble as a Celtic player and manager. 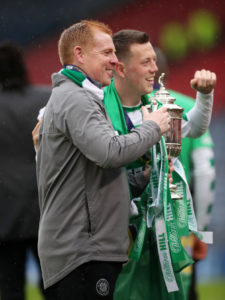 McGregor meanwhile is hoping to help Celtic win a Quadruple  Treble, of which he’s been an integral part.

The midfielder scored in the 2018 final and may be leading the side out at Hampden tomorrow, should Scott Brown start from the bench.