You are at:Home»Latest»Video – Moussa Dembele donates £180,000 to fund medical centre in Mali

FORMER CELTIC STAR Moussa Dembele, now of course starring for Lyon, has spent £180,000 of his own money to build a medical centre in Kobiri, Mali – the village where his dad grew up. The hospital is the first of it’s kind in Kobiri.

Lyon striker Moussa Dembélé paid £180,000 to build a medical center in Kobiri, Mali, the village where his father grew up.

The hospital is the first of its kind in Kobiri.pic.twitter.com/0N3MkOqppf

In 2018, Dembélé visited Kobiri, where one of his relatives told him about the difficulties that people have to go through just to get a medical diagnosis.

On 3 July 2019, he opened the maternity hospital. Since then, 95 births have taken place at the hospital.

Dembélé has previously helped to fund football pitches in Kobiri and the 17 surrounding villages. He has also donated protective gloves, masks, and hand sanitizers for the hospital.

Going forward, he will help to provide ambulances for the hospital.

Moussa Dembele remains a hugely popular figure among the Celtic Support and often engages with the club’s social media posts, loving to poke fun at the Rangers. He fell out very publicly with the then Celtic manager Brendan Rodgers and a hastily arranged transfer to Lyon for just under £20million was the outcome of that in late August 2018.

Dembele has been a huge success at Lyon and is linked to a summer move to the English Premiership with both Chelsea and Manchester United interested in signing him – Lyon are looking for in excess of £50million for the former Celtic striker who was signed from Fulham in August 2016 for just £500,000.

Dembele scored a hat-trick in his first game against the Rangers and went on to be a supreme-skelper throughout his time in Scotland. 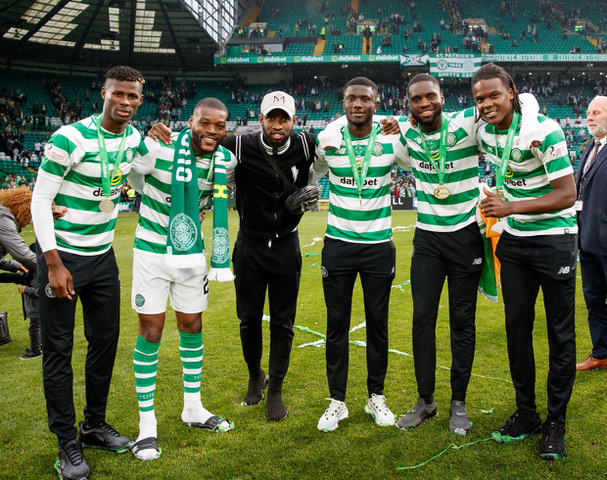 He arrived at Celtic Park on Trophy Day last season and celebrated the league win with his friends and former teammates on the pitch at Paradise.

His charity work is outstanding and clearly the Celtic spirit of Brother Walfrid has had an impact on Moussa – just when you thought you couldn’t love him any more, this happens!

‘That’ll teach ’em’ – Bears Rejoicing as Ladbrokes kicked out of Ibrox but all is not as it seems…https://t.co/bKiRstMgbO

‘Nuts’ – On the Buses, Battle of the Bulge and the Man from Dens Park said Yes…https://t.co/HnvollBFuF