You are at:Home»Latest»Video – Watch Neil Lennon’s Media Conference ahead of the Europa League match against Sparta Prague

Watch Neil Lennon’s media conference from Celtic Park ahead of the Celtic Park heading to the airport for the flight to Prague for tomorrow night’s must win Europa League Group H match against Sparta Prague.

The Celtic manager admits that he’ only heard about the Green Brigade’s banner that was displayed outside the from doors of Celtic Park this morning, about ten minutes before the press conference got underway and admitted that he’s come to accept that he’s never going to be everyone’s ‘cup of tea’ as far as being the Celtic manager. 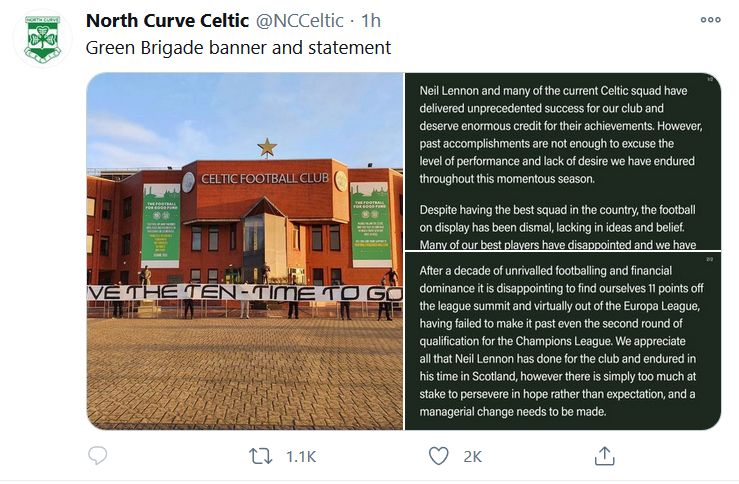 “You have to put a sense of perspective. We’ve made a better start to the league than we did two years ago and went on to win the treble. We’ve lost one domestic game this calendar year,” Lennon said.

Since I’ve been back, we’ve won four trophies in a row, the team’s won 11 in a row. We’ve got a chance of winning 12. We are going through a sticky patch, all teams do and good teams and managers come through that and that’s what I firmly believe we‘ll do.

We have to win tomorrow to stand any chance of qualifying. That’s our sole focus now. The reverse game here was as disappointing as we’ve been for a while and it’s important we motivate ourselves to correct that.”

💬 NL: “We know we are in for a title challenge and we’ll embrace it. It’s new for some of the players, section of fans but it’s not new for me. I’ve been in many title races and challenges before and I know how to win them.”

Listen to the full media conference below. Near the end he talks of speaking to Peter Lawwell every day and stresses that the CEO has been extremely supportive of him in his role. Anyone thinking that a chance is imminent looks to be incorrect, or at least for now. Neil Lennon is hoping that an improvement in performances and results can turn the tide. Time will tell.

If you would like to have your say then please email editor@thecelticstar.co.uk and we’ll get your opinions published on the site later today.

Previous ArticleCeltic Supporters Have Their Say: “Just because I’m mad doesn’t mean I stop caring”
Next Article Video – “We’ve got 100% faith in the manager, he’s been fantastic,” Scott Brown