You are at:Home»Latest»Video – ‘We’ve been Absolutely Tremendous,’ Lenny praises his ‘Ten Wins in a Row’ Celtic stars

“The way they’re playing at the minute, their mindset at this stage of the season, they’re giving me everything,” Neil Lennon noted at today’s Media Conference, ahead of the Boxing Day match away to St Mirren which incidentally had a 3pm kick-off.

The Celtic players trained today and will be back at Lennoxtown for a light session tomorrow – Christmas morning – at 10.30am then will get the afternoon and evening to spend with their families. Usually Celtic would gather at a hotel the day before an away match so the change this time around will be welcomed by the players and their families.

On the transfer front, the manager gave an update on Celtic’s interest in Slovan Bratislava striker Andraz Sporar.

“There was talks I believe yesterday but he is one of a number of options that we are talking to at the minute. There is no further progress on that one,” Lenny said (you can watch the full Media Conference below).

Aberdeen are appealing the red card shown to Sam Cosgrove in their 2-1 defeat at Celtic Park on Saturday later this afternoon and immediately after the match Derek McInnes had claimed that Neil Lennon – who didn’t speak to the press after the game, leaving that to his Assistant John Kennedy – agreed with him in that it wasn’t a challenge deserving a red card.

That is however NOT the view Neil Lennon now has after reviewing the two footed challenge. Let’s be clear, it was an absolute shocker as just about everyone inside Celtic Park could see at the weekend. Perhaps given it was away down in that nearside corner, the view wasn’t very clear from the dug-outs?

Both feet off the ground, red all day long

“He did get a lot of the ball but there was intent there. I didn’t think he needed to make the challenge in that area and the way he did it.

“Ten years ago I would have been happy with a challenge like that but with the game as it is now, on the follow-through it maybe could have hurt Kristoffer.

“And he is maybe lucky that he didn’t come off with a bad injury or an injury of some sort.

“Looking at it at the time, it was a full-blooded challenge but when you see it again I am thinking, ‘Why are you making a challenge like that? You are setting yourself up for trouble’.

“So the way the game is, it was probably the correct decision. 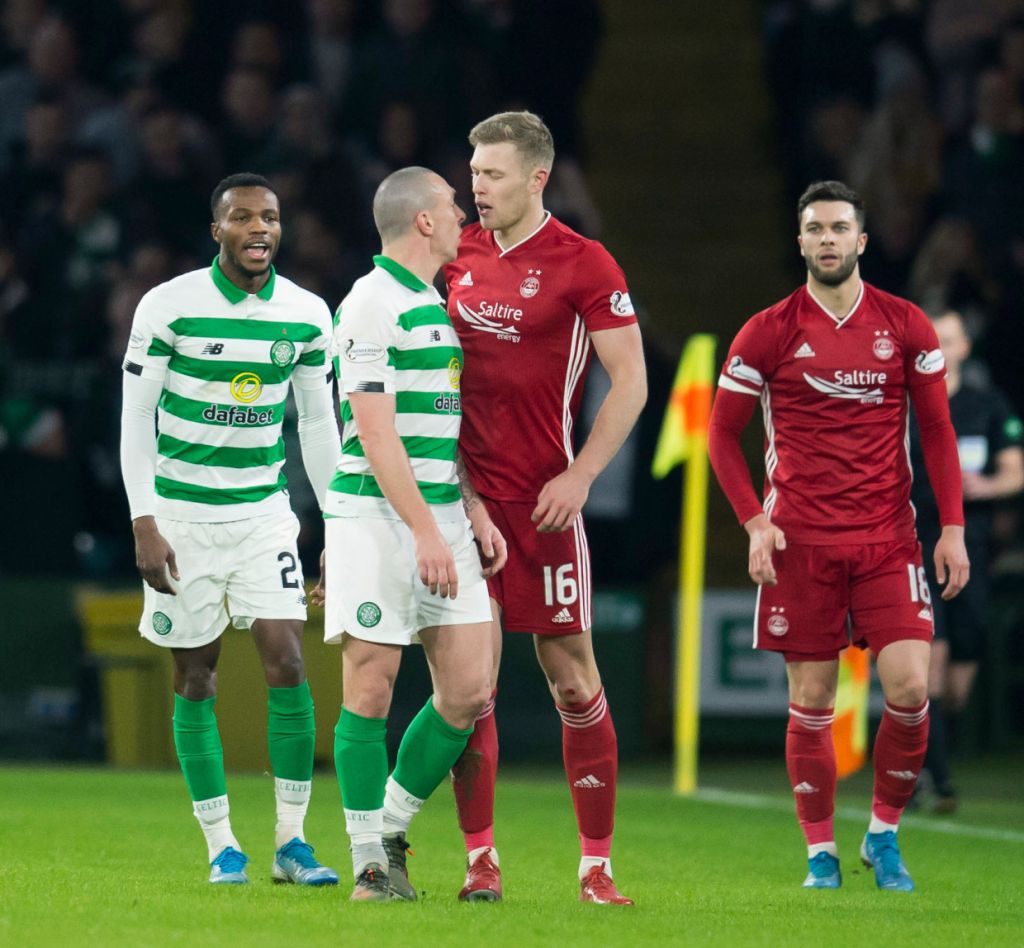 “You always worry when a player has left the ground that the excessive force could be dangerous.”

It will be interesting to see how the SFA Appeals panel view this later today.

Elhamed and Elyounoussi will definitely miss the next two games – away to St Mirren and at home to the Rangers on the 29 December. That will be Celtic’s 63rd match in 2019 which has seen them win the Scottish Premiership, the Scottish Cup, Group Winners in the Europa League, the League Cup and of course established a five point Christmas lead in the title race.

That though was simply due to a fixture quirk according to Steven Gerrard – as his side has a game in hand as they only played twice last week when Celtic had three games. Funny how he never mentioned any ‘fixture quirk’ last December when his side beat Brendan Rodgers’ side 1-0 to go level on points but with an inferior goal difference. And Celtic’s game in hand from the postponed match against St Johnstone when we were otherwise engaged winning the League Cup Final against Aberdeen, wasn’t mentioned by Gerrard or anyone else at Ibrox as a fixture quirk, was it?

Previous Article‘If Jordan Rhodes is the silly season I’d hope Sebastien Andersson is the real deal,’ Niall J
Next Article Jim Craig – Wishing you all, wherever you are in the Celtic World, a Happy Christmas