You are at:Home»Latest»Vote for the Lisbon Lions in BT’s Greatest Team Contest

SUPPORTERS have the chance to vote for Celtic’s Lisbon Lions as BT fill the time with a ‘Greatest Club Football Team of the Last Decade’ contest.

Last time, Jock Stein’s side beat Brian Clough’s Nottingham Forest. This time, they face a challenge from the AC Milan side that won back to back European Cups in 1988. Currently, it is neck and neck between the pair.

Celtic have had some incredible teams over the years, but in the running for the Coronavirus-induced competition is one that need no introduction. The Lisbon Lions. Simpson, Craig, Clark, McNeil, Gemmell, Auld, Murdoch, Wallace, Lennox, Chalmers and Johnstone. Celtic’s Greatest Ever Team. 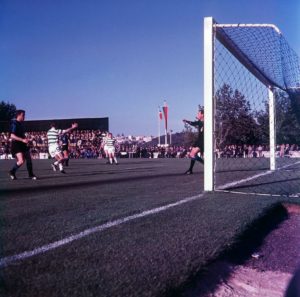 The Lions were crowned with a 2-1 victory over Inter Milan at the Estadio de Nacional in Lisbon. Inter led through a penalty from Mazzola after Jim Craig fouled Cappellini in the box.

Stein’s side, who had completed a domestic treble already, pushed as the second half progressed and had a number of chances. Tommy Gemmell scored with a thunderous effort from 25 yards out to level the game up after the hour mark.

Celtic got the winner with five minutes to go when Bobby Murdoch’s effort was put into the net by Stevie Chalmers. The Champions of Europe were crowned in what was the greatest day in Celtic’s history.

Previous ArticleJames Quillan: The Celtic Founder Who Defected & Formed A Rival Club
Next Article ‘Dukla were a very fine side but Willie Wallace made the difference,’ Archie Macpherson