Celtic’s ambition to become one of the top women’s teams in the country has gone up a level over the past few seasons with Celtic reaching the SWPL Cup Final in 2017 and 2018, before bringing in a new Head Coach Fran Alonso and transitioning to a full-time professional side as the team aimed for top level competitiveness. 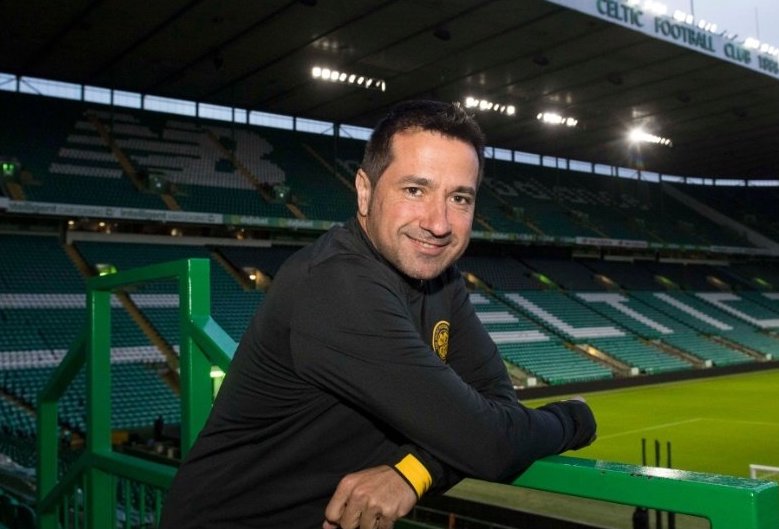 It’s fair to say last season started with a bang as a late, late winner against Glasgow City at a storm battered K-Park East Kilbride set the season off to a flying start. Yet the conditions Celtic and City faced that night symbolised what was to be a stormy start to the season.

“I was expecting a better welcome from Glasgow – I came and we got Storm Ciara, Storm Dennis and COVID-19, so that was a great welcome to Scotland!”

“I probably picked a time that wasn’t the easiest, but that was when the team became professional for the first time in history, so for me that was the right time to join Celtic. I love the city, the country and the club, and I know it hasn’t been easy for anyone but I am even more enthusiastic now than when I was when I signed.”

With last season over almost as soon as it began Celtic are back to square one. This afternoon they are back playing following the Covid 19 shutdown for the first league fixture of the new season and once gain the opponents are the dominant Scottish club Glasgow City.

💬 “I’m a centre-back in the box, in the 92nd minute, with a chance to win the game for the team. It was so important, it was the occasion, the night, the game was bigged up.”@kellyclark_94 reflects on THAT winning goal the last time #CelticFC faced @GlasgowCityFC

Alonso and his players will be hoping lightning strikes twice and they can once again emerge victorious in the season’s opener – a game you can watch Live thanks to BBC Alba’s extensive live coverage of the Scottish league this season. It’s a 16.10 kick off and it should be a cracking encounter to get the season up and running.

Alonso is certainly looking forward to getting started.

“We can’t wait for the competition and we believe this group can reach good highs this season. We don’t want to put numbers on it and we will fight against super teams and it will obviously be difficult for us, but we can’t wait.

“It hasn’t been easy for any club or anyone, it’s been a tough time for everyone, but at least we are lucky enough that we have football. Some people have lost more important things so we have to realise how lucky we are.

“If I could choose, I’d rather we carried on from where we left it, because we beat a team that isn’t beaten very often and we did so in a great way, so it’s a little bit of a shame but I understand. We will try to repeat that amazing day, but we know it will be tough,” he said.

Celtic have been busy in the transfer window. Last season’s star signing was Anita on loan from Atletico Madrid and thankfully Atlletico have agreed to have Anita return to Scotland for this season and both the player and the club will be hoping for a lot more football than they achieved last time out.

💬 “It has been a long time, and it was hard. We have missed this a lot. We cannot wait for Sunday.”@FranAlonsoFA gives his thoughts ahead of the @SWPL opener against @GlasgowCityFC on Sunday.

Celtic have also added European experience to the squad as they look to be competing for silverware at the top end of the title race, with that added excitement of a second champions league place being available from next season. The additions of Megan Crosson, Anita Marcos and Caitlin Hayes has added top level experience in European football, with all three having featured in European competition, and with the Celts looking to rub shoulders with Europe’s elite next season.

American Crosson played at Champions League in Lithuania, while Hayes’ scored a couple of goals at that level while playing in Cyprus, while Anita came off the bench for Atletico’s quarter-final against Barcelona.

Fran Alonso certainly has Champions League qualification front and centre of his thoughts this season.

“To have Megan, Caitlin and Anita all with Champions League experience is great and it’s important that they are used to that environment.”

It looks like some exciting times lie ahead for this Celtic team. Here’s hoping that can start with a repeat of last season’s win over Glasgow City this afternoon and can reach their ultimate goal of Champions league qualification.

Here at The Celtic Star we wish the Celtic team all the best for the season ahead. Tune into the match today, it might give you a much needed wee pick-me-up after yesterday’s shambles against theRangers.

Come On You Girls In Green!