The surprise present for a lot of Scottish football fans has come a few days earlier than expected this year with perhaps one of the most cringeworthy/brilliant videos that has ever graced the internet.

Clyde 1 have produced the goods this year with Hugh Keevins becoming the lead in their take of ‘Merry Christmas Everyone’ by Shakin Stevens. Keevins was joined by Jim Kerr of Simple Minds, Celtic’s Scott Brown and Ryan Christie, GBX’s George Bowie and Partick Thistle’s Ian McCall as well as a whole host of Superscoreboard panelists to sing the festive tune. 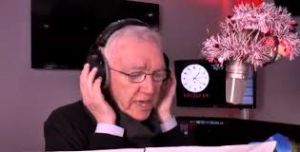 In what can only be described as a feel good video, Keevins – a source of derision at times for his comments – wishes all a Merry Christmas from himself and his colleagues.

Merry Christmas from all of us at Clyde 1, especially from @shinjukushug who thought it was time to recreate a timeless classic. With some help from a few famous faces 👀😂 pic.twitter.com/cBcngjqiBy

Stick to journalism, Hugh as I think Shakin Stevens’ version was better!