You are at:Home»Latest»Watch Jimmy Delaney score two goals for Scotland to defeat Nazi Germany at Ibrox

JIMMY DELANEY is one of the many Celtic players of whom one must occasionally ask the question “Could this all possibly be true?”

His career needs to be studied in detail before one can then pinch oneself and say “Yes, this is true!” Take for example the fact that he won three Cup medals in three separate countries – Celtic in 1937, Manchester United in 1948 and Derry City in 1954.

Now, I suppose, some footballing geek will one day produce another example of someone who has done this, although to my knowledge, there is no-one yet. Yes, but “twinkle-toes” did it in three separate decades with a horrendous World War in the middle of it! And after he did the first part of it, he shattered his arm and was out of football for two years! He even almost did it a fourth time in a fourth country, but his side lost the final! 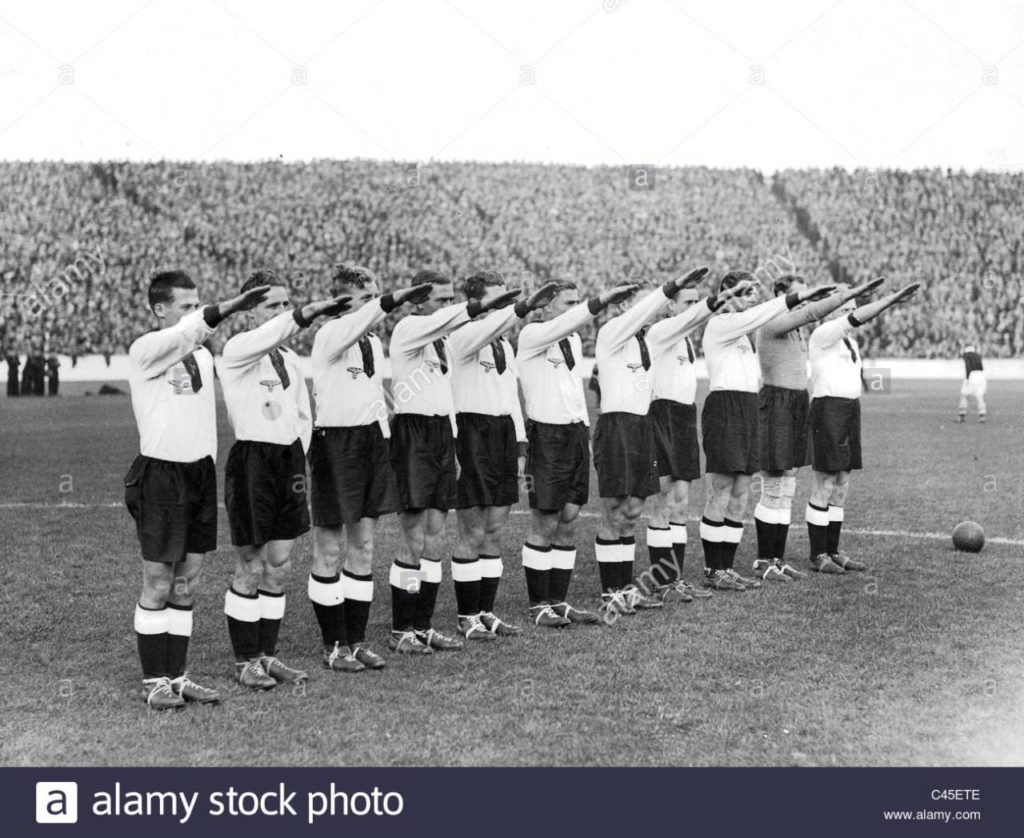 And he scored two goals for Scotland against Nazi Germany! This happened at Ibrox in 1936 with the detested swastika flying overhead. Hitler, it was said, was not best pleased when he heard the news. Already sulking when he saw Jesse Owens, a distinctly un-Aryan black American, ruin his Olympics, now he faced further discomfort when the Scotsman from Cleland in Lanarkshire showed him that the Herrenvolk were not champions of the footballing world either.

Then at the end of the war in 1946, it was the same Jimmy Delaney who scored the goal that beat England at Hampden in the Victory International, a simple goal, but one that set Scotland ablaze with delight.

In 1937 on two successive Saturdays in April, Hampden hosted two record crowds of over 147,000. Let’s not quibble about a hundred or so, but those who were at both games claimed that the Celtic v Aberdeen Scottish Cup final had more people than the Scotland v England International in that more climbed the wall for the Cup final!

There was one man who played in both games, and he was on the winning side both times. He starred in both, and his name was Jimmy Delaney!

And yet, he was a modest, unpretentious, shy man often seen walking his dog round his native Cleland. In later years he came to Celtic Park to see the games, and when the bald head made him prominent in the stand, he wore a hat even on the warmest of days. Yet he was no recluse or boor. He was friendly, sociable, sympathetic and loved Celtic till the day he died.

So much did he love Celtic that he found it difficult to attend Old Firm games, and on his walks would look at supporters’ buses coming home to judge the result by the demeanour of the passengers! He is by no means the only Celtic fan who, in such circumstances, hides up hills, in art galleries, garden sheds, toilets and even Churches trying to pretend to the world and himself that he doesn’t really care!

Born in 1914, Jimmy came from the Lanarkshire village of Cleland. He could hardly fail to fall in love with Celtic in that predominantly Irish village. The village was also like most industrial Scottish villages obsessed with football, and Jimmy played the game from an early age.

In summer 1933 he was playing for the West Lothian junior side Stoneyburn and a few good performances for them attracted the attention of Celtic. He needed no second bidding when they approached him, and he signed in September 1933, a time of Celtic’s history when things were not going particularly well.

Maley would in later years say that Jimmy in 1933 was a “real little laddie with a bright cheery face” and he would in time help to change the fortunes of Celtic, so much so that Maley has no hesitation in rating him as high as “Jamie (sic) Quinn, James Kelly, Patsy Gallacher, Alec McNair and John Thomson”. Not only that, but Maley never knew Jimmy Delaney to “do a foul action in spite of severe abuse from men who ought to have known better”. 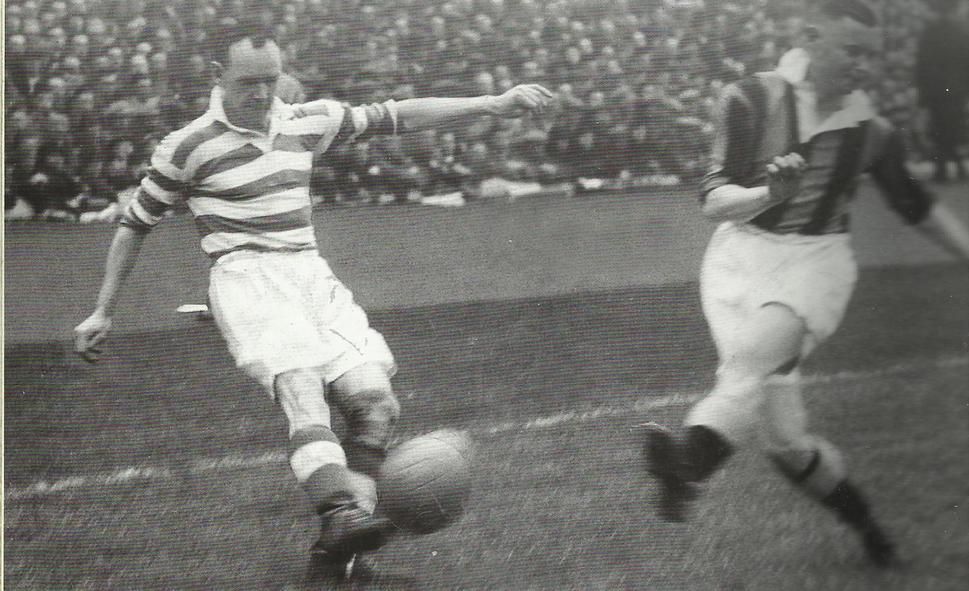 Delaney was an outside right, but his strength lay in the fact that he could play anywhere in the forward line and could pop up all over the place. He learned this from the great Jimmy Napoleon McMenemy who became trainer at Celtic Park in the late 1930s and in fact more or less coach, for Maley was now old, morose, hypochondriac and curmudgeonly with little interest in the players.

McMenemy however who had himself played in a great forward line, knew most of what there was to know about football and showed Delaney the wiles of forward play. Little wonder that the Scottish League was won in 1936 and 1938, the Scottish Cup in 1937 and the all-Britain Empire Exhibition Trophy in 1938.

It was possibly 1935/36 when supporters saw Jimmy at his best. He had the rare ability to run at speed (“charging down the wing like the Fire Brigade” in one simple yet vivid simile), change direction, stop, start again, evade tackles – and all this with the ball at his feet.

He could score goals himself, but his main contribution lay in the feeding of the prolific Jimmy McGrory in the centre. With the under-rated Frank Murphy on the left and JayDee (as he was called) on the right and talented inside forwards like Willie Buchan and Johnny Crum supplying the ammunition as well, goals flowed and Celtic won the Scottish League for the first time in 10 years. 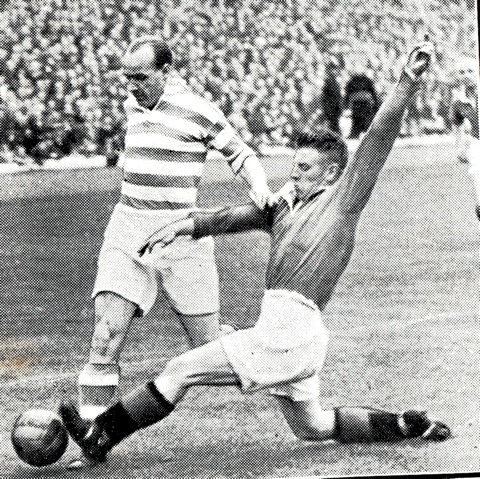 The war years were dark ones for Celtic, and they certainly were for Jimmy Delaney who broke his arm in April 1939 and didn’t play again until 1941.

Celtic in fact never won a major trophy again with Delaney on board, and possibly frustrated at all this, Jimmy left for Manchester United with whom he won an English Cup medal in 1948 when Matt Busby’s men beat Blackpool 4-2.
He would return to Scotland to play for Aberdeen and then Falkirk before joining Derry City in Northern Ireland with whom he won the Irish Cup in 1954 when he was now 39. Two years later, he lost the Football Association of Ireland Cup final while playing for Cork Athletic who were beaten by Shamrock Rovers in the final. He finished his career playing for Elgin City in the Scottish Highland League.

Jimmy Delaney was some player! He died in September 1989.