You are at:Home»Latest»Watch: Tierney Returns to Celtic to Commentate

The brilliant Open Goal were at Lennoxtown to film part of their Head Tennis Christmas Special with Celtic’s Leigh Griffiths and Mikey Johnston.

However, there was another special guest in the training centre as ex-Celt and Arsenal’s Kieran Tierney commentated on the match with Si Ferry & Paul Slane versus the Celtic pair.

Ex Celtic duo Paul Slane and Si Ferry were joined by former-Hearts striker Kevin Kyle as they faced off with two of Neil Lennon’s side.

Whether it was before KT left or not remains to be seen but it was the former Celtic prodigy Paul Slane that grabbed the headlines as his success in the arena saw Open Goal win 2-1. 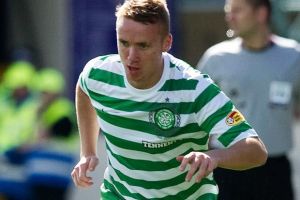 Tierney left Arsenal in the summer for a fee of £25m but has struggled with injuries since swapping Glasgow for London.