You are at:Home»Latest»We can be Heroes…Watching the Bhoys win at Ibrox with the BBC (Berlin Buckfast Crew)

We can be Heroes…Watching the Bhoys win at Ibrox with the Berlin Buckfast Crew…Three Years Ago Today!

Like many of the Bhoys who follow the team abroad, I felt a sense of disappointment watching the team leave for Riga earlier, as the ongoing pandemic situation prevents another trip to see the Hoops on their European travels. Much greater issues to be concerned about, I know.

On this day three years ago, Saturday, 23 September 2017, I was watching the Celts secure a valuable 2-0 victory in Berlin. Well, at least I was following in the footsteps of the Thin White Duke, David Bowie, one of my musical heroes, by sampling the delights of this superb German city. The only thing was that the team were playing a bit closer to home, Govan to be exact.

With my usual immaculate sense of timing, I had booked up for the Berlin Marathon, one of the six World Majors, long before the 2017/18 fixtures came out. And there you go, Sod’s Law, it’s only a trip to Ibrox they schedule, the day before the race. 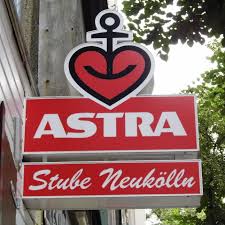 Not to be defeated, I check out the options for watching the game, the best of which appears to be a trip to the Astra Stube pub in the southern district of Neukolln. It is the Berlin base of the St Pauli supporters, so that will do me nicely. I get in touch ahead of the match and I am assured I will be able to watch it there, even though St Pauli have a game on at exactly the same time.

Saturday morning comes and I drag my long-suffering wife onto the various U-trains from our hotel in Freidrichstrasse, in Central Berlin. Up a narrow side street and there it is, the Astra Stube. Inside the bar, the St Pauli boys are already gathering, enjoying a few beers. There are football club colours everywhere, predominantly in the brown, white and red of their favourites, however, I am chuffed to see several Celtic items on display. 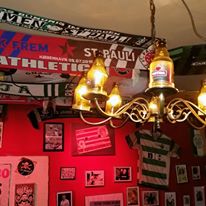 “They’re there, and they’re always there.”

I order a beer at the bar – perfect Marathon prep this will be – and the chap explains that the Celtic match will be shown in what appears to be a snug adjacent to the main area. Inside there is a red velvet two-seater couch, like David and Victoria’s throne, at the opposite end from a pull-down screen. There is no-one else in the snug. A home away from home. Result.

Before the game gets underway, it starts to get a bit busier. The boys introduce themselves and tell me that they are members of the Berlin CSC, as they remove their jackets to reveal an assortment of Hoops through the years. Bags are emptied and t-shirts are pinned to the wall for sale. 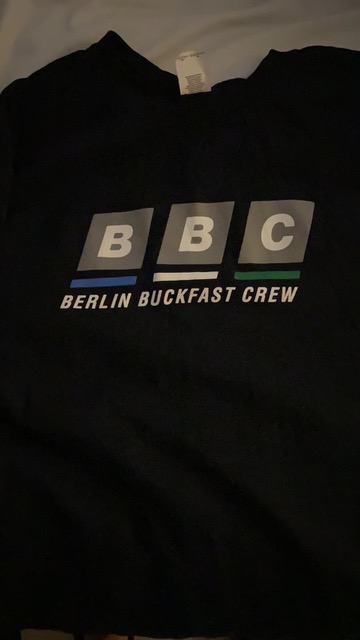 One has the familiar BBC logo on it, which seems strange until closer inspection reveals that as the acronym for the Berlin Buckfast Crew! Well that’s an early Christmas present sorted for one of my sons anyway. He will appreciate that. 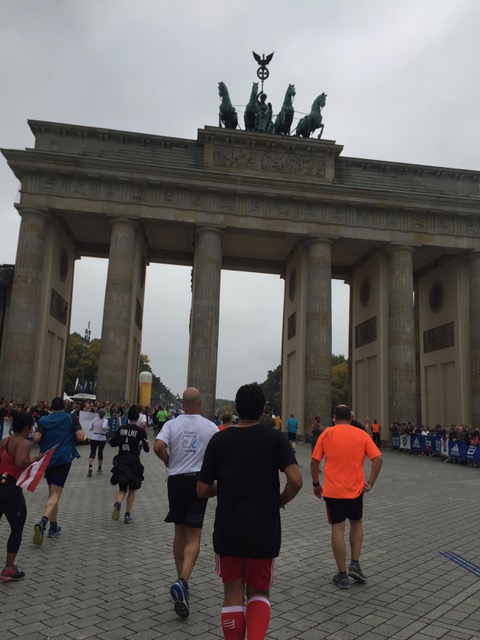 Game starts and whilst Celtic are well on top as usual, there is still no scoring by the interval. The highlight of the first half has been the German commentary, of which the only two words I can make out are “Catholic” and “Protestant”. I’ll just leave that one there, I think. 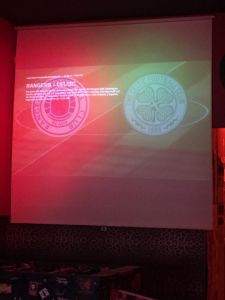 I have limited myself to one pint of Guinness per half, the sort of dedication which will lead one day to Olympic gold, so on the half-time whistle I move faster than any of the players have to date to secure that second glass of black nectar.

Early in the second half, it is tasting sweeter, although not as sweet as the turn from which Tom Rogic explodes the ball high into the net, to the delight of those non-athletes packed into the Free Broomloan. A little piece of the Gallowgate is now enjoying life in South Berlin, as we celebrate a goal scored so many miles away as if we were there. “Get in!”

Within 10 minutes, Paddy Roberts, the Starman playing on the right, releases an exquisite pass to find Leigh Griffiths playing on the last defender. As always, his aim is true, and suddenly we are 2-0 up and coasting. Party time again in Neukolln. Bhoys keep swinging.

The Celts see out the remainder of the match for another three points in their quest to retain the title. I’m on cloud seven as we emerge back into the afternoon sunlight to head back into the city. Job done.

Well, not quite. I forgot about the race the following morning. As always, there is a fabulous atmosphere as around 50,000 athletes and me run/jog/stagger around the famous city. My wife is the proper runner in our relationship, and she is helping me around the course with an assortment of tactical tips. Four hours or so later I am closing in on my twin targets of finishing the course – whilst preferably still breathing – and beating the lorries which sweep the streets at the end. She has time to pose for photos, whilst I crawl Darwin-esque towards the finishing line at the Brandenburg Gate. She clearly didn’t have a second pint of Guinness.

There is that huge surge of emotion and pride as we run through the finish and then there is a cold pint of German beer awaiting us at the other end, which tastes just fantastic. It’s a few weeks later before it’s pointed out to me that the beer was alcohol-free. Who knew? 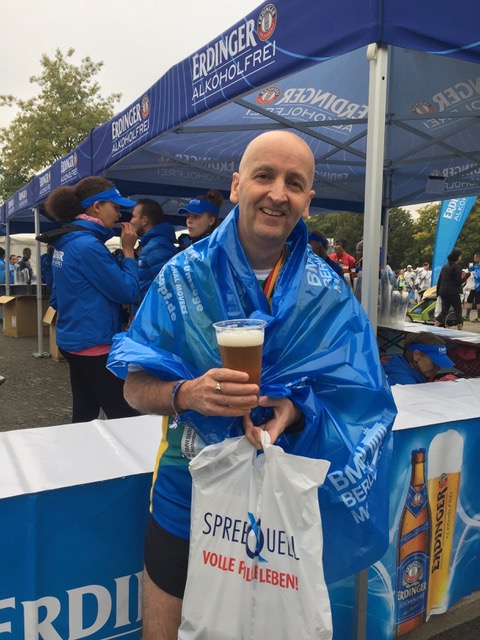 Anyway, another race ticked off and another victory for the troops. And a pint of Guinness I can enjoy without feeling guilty! Life is good.

Not long to wait until the Celts are in Munich – and this time I will be there.