You are at:Home»Latest»‘We played with the handbrake on,’ Lenny to play Dembele and Henderson but Shved is unavailable

CELTIC manager Neil Lennon will look to rising stars such as Karomoko Dembele and Ewan Henderson for the final league match of the season against Scottish Cup Final opponents Hearts.

Lenny this morning confirmed that both Kieran Tierney and James Forrest will NOT feature on Sunday and hinted that there will be other regular starters who will be missing from the team at the weekend as he prepares his squad for the Scottish Cup Final the following Saturday.

“Dembele is a possibility for Sunday. He’s training with the squad this week, as is Ewan Henderson. We’ve got boys that are carrying knocks and we don’t feel the need to risk them ahead of the cup final,” Lenny told the media at Lennoxtown this morning.

And The Celtic boss was in a defiant mood when asked about the defeat and the pro performance from his players at Ibrox on Sunday in what was essentially a Dead Rubber match. 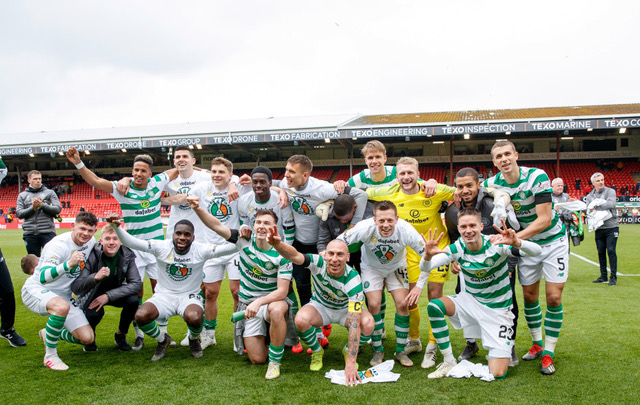 “There has to be perspective,” Lenny said. “The players have been brilliant. At times, they’re not going to play well.

“We didn’t stutter over the line at all, the league was won two weeks ago.

“In modern-day football, there’s a furore after one result. We played with the handbrake on on Sunday, we didn’t play well, but it’s in no way terminal. There‘s still so much to look forward to.”

???? Neil Lennon speaking to the media at Lennoxtown today ahead of Trophy Day.

???? NL: “@kierantierney1 and James Forrest won’t be involved at the weekend but both should be fit for the cup final.” pic.twitter.com/4p335iA0jI

Lenny also commented on Scott Brown who celebrates 12 years as a Celtic player today after his £4.4million move from Hibs.

“Scott is a modern day great. His influence, his quality of play and his personality. He reads the game brilliantly. His athleticism is brilliant. We wouldn’t have won a lot of games without Scott and I think that gets underplayed.”

Lenny also confirmed that Marian Shved is not available for Sunday due to red tape issues but reckons it will be worth the wait because he could be a real impact player next season.

“He trained yesterday and looked great. We unfortunately can’t use him, but he’s a very exciting player and looked right at home with his teammates. He’s the type of player we enjoy at Celtic.”

The manager is clearly looking forward to Trophy Day on Sunday, his fourth and Celtic eight consecutive triumph.

“It’s always a very special occasion and great atmosphere. Ultimately, it’s about Scott Brown picking up the trophy and standing alongside a podium full of players. We’ve done it eight times in a row, which is very difficult to do.”

Hearts are also likely to play a much changes side on Sunday as Craig Levein makes his own plans for Hampden.

Previous ArticleCeltic’s Iconic No8 Paul McStay to present Premiership Trophy to Broony
Next Article ‘I think I know how to win titles,’ Lennon hits back at ‘New Breed’ of Celtic supporters