You are at:Home»Latest»‘We will be stronger’, Josip Juranovic’s Champions League promise

Celtic defender Josip Juranovic has said that he and his teammates will be even stronger next season in the UEFA Champions League. The right-back started all of Celtic’s Group Stage matches and impressed as Ange Postecoglou’s side did; however, the team could not get the results deserving of their performances.

Speaking to The Celtic View podcast, Juranovic said that the experience in Europe’s top competition had whet his appetite for more nights under the lights at Paradise, 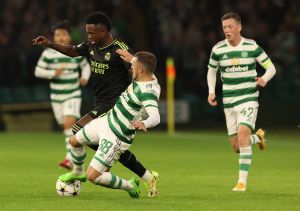 Juranovic is constantly linked with moves away from the club, such have been the quality of his performances since arriving from Legia Warsaw. There is a reluctant acceptance that Juranovic will eventually move on but the club will be hoping that the fee attached is one befitting of a player of the Croatian’s quality.

Celtic have been linked with a move for Ally Johnston, a Canadian Internationalist. The right-sided defender is also at the World Cup and his Canada side will face up against Croatia at the weekend in Matchday Two of the competition.