You are at:Home»Celtic Women»Wellings grabs another hat-trick as Celtic striker edges towards 40 goals target in debut season

Celtic entertained Hearts last night in the penultimate SWPL1 game of the season, and in a fixture very much one that could be described as a dead rubber, Fran Alonso’s team put on a goalscoring show to evidence, in the best of Celtic traditions, there is no such thing as a meaningless match.

The Hoops were in devastating goalscoring form and simply blew away their Edinburgh opponents, with all five goals coming in the first half, and with Liv Chance and Charlie Wellings attempting to outdo each other in the goalscoring stakes, before Wellings emerged with a hat-trick and the match ball, while Chance had to settle for a brace. 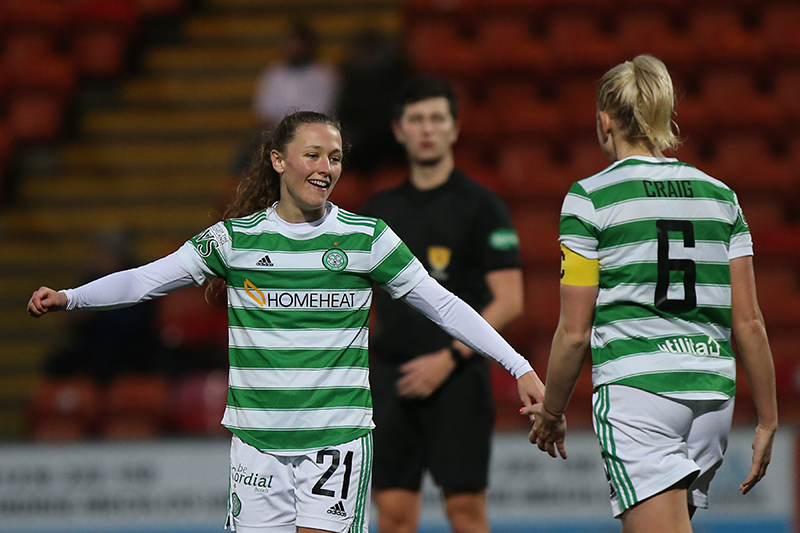 As Wellings closes in on an incredible tally of 40 goals scored in her debut season at Celtic someone has yet to come up with a plausible explanation as how she was managed to be overlooked by both the PFA Scotland and even the Celtic awards for Player of the Year.

The Hoops took the lead in this one after just nine minutes, as from a Mengyu Shen cross Hearts ‘keeper Parker-Smith and Charlie Wellings battled for supremacy with the Celtic striker exhibiting impressive strength to force the ball over the line.

Five minutes later it was two, and again it was Shen supplying the ammunition for Wellings, as the Chinese international’s pass was converted by Celtic’s top scorer with a fine drive low into the far bottom corner of the net. And the Celtic striker could have completed her hat-trick in the opening twenty minutes as a header and then a first-time effort at goal flashed wide as Celtic turned the screw and put on the style.

Celtic did make it three after 27 minutes as Liv Chance stepped up to the mark and set about chasing down the goal challenge set by Charlie Wellings, as with the Hoops players claiming for a penalty, Chance played to the whistle and swept the ball past Parker-Smith and ended this one as a contest, if it ever had been, after less than half an hour.

And Celtic and Chance weren’t finished with their first half onslaught just yet, and could have been four up as Hearts’ Cowan cleared of the line after pressure from Jacynta forced Parker-Smith to go to ground, from where Wellings stole in only to see ger efforts deflected away for a corner.

But a fourth goal was certainly coming and when it arrived it was a beauty.

Keeping up with Wellings however is no easy task, and the Celtic striker responded to the challenge set by Celtic’s creative force with a fifth goal for the Celts four minutes from half-time. And it was Chance who put in-match rivalry aside to show teamwork comes above personal triumph, as the New Zealander delivered a first time cross to Wellings and the Celtic striker stabbed the ball home to complete her hat-trick, and put Celtic in at the break with an incredible five goal lead and a superb team performance to match the scoreline.

🗣️ “We’re building momentum for the final and I think in the first half we executed it well.”#COYGIG 🍀 @CelticFC https://t.co/96QkmZ4RoN

Fran Alonso rang the changes at half-time with the game won and thoughts turning to this weekend’s Glasgow Derby with theRangers, as well as a Scottish Cup Final with Glasgow City to consider. Off came Caitlin Hayes, Mengyu Shen and hat-trick hero Wellings, and in their place entered Annie Timoney, Tegan Bowie and Chloe Warrington. The substitutions suggested a controlled end to this match and so it proved.

Celtic weren’t to score again and saw the game out comfortably with the additional defensive introductions, however, Chloe Warrington can count herself unlucky not to score after a thumping shot from wide nicked the corner of the woodwork, and Liv Chance was denied a free second half run without Wellings to catch up on the striker as a fine effort from the midfielder went just wide.

And soon after Chance too left the field of play, and introduced to the biggest cheer of the night came Natalie Ross. The midfielder has spent a long, long time on the sidelines through injury, but looked to immediately make up for lost time as a shot just eight minutes after entering the play forced Parker-Smith into tipping the midfielder’s effort over the bar. Welcome back Nat, you have been missed!

These two putting the hoops five goals in front at half time against Hearts.

From there Celtic simply saw this one out, but the hard work had all been done in the first half demolition of their Edinburgh opponents. After putting the game to bed in the opening 45 minutes the order of the day was to control the game and conserve energy, and Celtic did both in a comfortable and professional manner.

It would have been easy for Celtic to go through the motions in this one, but instead they put on an entertaining and ruthless show for the Celtic fans. Now thoughts turn to the Glasgow Derby this weekend, and a chance to end theRangers unbeaten league record, before attention will turn to the Scottish Cup Final and a chance to win a domestic cup double.

On this form you wouldn’t put it past Fran Alonso’s entertainers to manage both those tasks and see out the season in style. Incidentally Fran was just as excited as the rest of us about events at Tannadice last night, here’s what he had to say…

“Brilliant! Massive congratulations to Ange and the Bhoys Not only for the amazing title but for the football played, great to watch!! Glasgow Celtic Champions! Mon the hoops!! HH”…anyone else starting to suspect that Fran really gets Celtic?

Brilliant! 💚 Massive congratulations to Ange and the Bhoys!👏👏 Not only for the amazing title but for the football played, great to watch!!

Remember folks, lets pack out Tynecastle on Sunday 29 May and roar this Celtic team onto Scottish Cup glory in the final against Glasgow City, tickets are just a fiver for adults and free for the weans so let’s make sure there’s a large Celtic support there to give the Ghirls a cheer. They deserve it. Ticket details below…

🏆 Tickets for the @Biffa Scottish Women’s Cup Final are now ON SALE! 🏆

Secure your tickets for the season finale now! 👇https://t.co/z9tpi9pFEr pic.twitter.com/E4gqzDxord