NEIL LENNON could be set to throw a couple of curveballs in his team selection for today’s match versus Rangers if the ‘leaked team’ is to be believed. Ryan Christie, Nir Bitton and Hatem Abd Elhamed are still all isolating, James Forrest is out with a knock and striking duo Albian Ajeti and Odsonne Edouard are returning from spells out meaning the manager appears to have stuck with his favoured formation and drafted in his fittest team.

Vasilis Barkas is set to start in goals with a back three in front of him comprising Shane Duffy, Kris Ajer and youngster Stephen Welsh. The youngster hasn’t started a league game since February; however, with Christopher Jullien rumoured to be injured, the youngster will need to deputise after Nir Bitton and Hatem Abd Elhamed were ruled out after testing positive for COVID-19 while on International duty with Israel.

In midfield, Diego Laxalt is said to make his Celtic debut at left wingback with Jeremie Frimpong on the right. In the middle, captain Scott Brown starts with Callum McGregor and Olivier Ntcham.

In attack, Albian Ajeti has passed fit and he will start with Patryk Klimala if the rumoured team is to be believed. 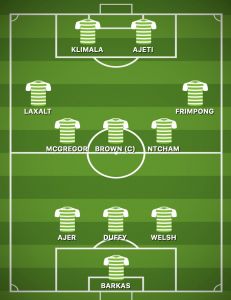 We will have confirmation of the team after 11am as the build-up to the game begins.

If this team is correct and young defender does start, he will need to be at his best to help Celtic keep a clean sheet. It is a strong team with a strong bench likely as well, despite the COVID-19 risk that threatened to thwart the preparations for today’s game.