You are at:Home»Latest»‘We’ve Got Mikey, Mikey Johnston…’ Minute by Minute as Celtic beat Dundee 3-0

THE CELTIC team was just as we exclusively revealed at lunchtime and didn’t they play well? Here are our match-day notes which tells their own story of how today went…

5 Mins – Ralston drives an excellent cross from the bye-line but Dundee keeper Jack Hamilton gets a hand to it to prevent a Scotty Sinclair goal.

6 Mins – Mikey Johnston beats the offside trap but Hamilton saves his first shot of the afternoon.

6 Mins – Incredibly Celtic are not ahead. Sinclair picks up the second ball and has time to control and shoot but his effort is headed off the goal line brilliantly to concede a corner.

7 Mins – Unbelievably 3 Dundee players break with only James Forrest defending and the winger cuts out the cross to concede a corner and prevent a shock opener for the visitors.

8 Mins – Another Dundee threat but shot from edge of the area goes narrowly wide.

11 Mins – Scotty Sinclair beats his man, cuts inside and curls an effort towards the far corner but it’s wide.

17 Mins – Wonderful play from Sinclair again, his cross finds Forrest and Johnston getting in each other’s way and the bar is struck rather than a certain opener! Frustrating!

17 Mins – Forrest is one on one with the full back for the first time in the match and skins him for pace to reach bye-line, Dundee clear at expense of a corner.

17 Mins – Izaguirre finds Rogic at far side of area with the corner. The Australian shows some great skills to control and chip but it lands on the roof of the net.

19 Mins – Sinclair escapes the attention of 3 Dundee defenders to get a shot away but Hamilton saves comfortably enough.

20 Mins – Constant Celtic pressure sees Sinclair reach the bye-line and cross for Forrest but his header goes over the bar.

22 Mins – Sinclair is involved again as Celtic continue to press down the left hand side of the park. His cut back for Izaguirre to cross and Rogic’s attempt at goal is very similar to the gaol Mikael Lustig scored against Kilmarnock recently. This time however the keeper makes the save.

27 Mins – Filip Benkovic decides to have a go from 30 yards and his effort misses by a few inches. So close again!

30 Mins – Celtic interchanging between the forward players is a joy to watch. Ntcham crosses for Mikey Johnston but has header is saved by the busy Dundee keeper.

32 Mins – Sinclair, who is having a fine game, finds Johnston inside the area . His low shot aimed at the far corner looks like giving Celtic a much deserved breakthrough but it curls agonisingly wide of the post. Unbelievably it’s still goalless at Celtic Park.

32 Mins – the impressive Ralston drives a powerful cross which zips across the goal to find Sinclair. His cross is met by Ntcham who forces Hamilton into yet another decent save.

36 Mins – Excellent stuff from Forrest and Johnston down the right results in a headed effort from the cross from Scotty Sinclair but again the keeper saves.

38 Mins – Olivier Ntcham tries to curl one into the corner form the edge of the box but it goes narrowly wide.

41 Mins – Today’s skipper Callum McGregor finds Johnston inside the box, the teenager gathers and turns the defence inside out before placing his effort across Hamilton and into the net for a richly deserved opening goal. 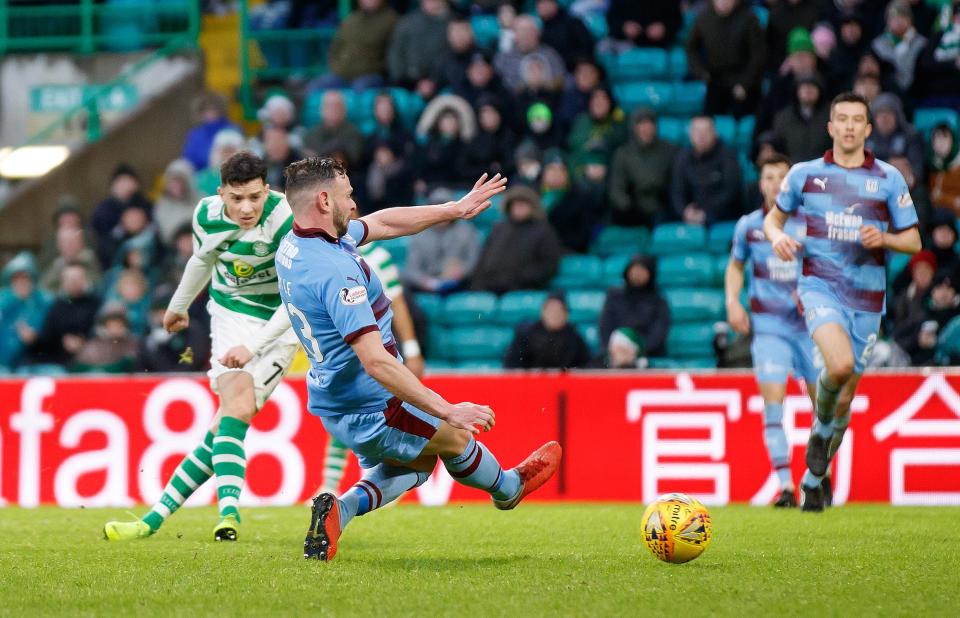 43 Mins – Dundee try to surprise Celtic and McGowan forces Bain into action but the Celtic goalkeeper is alert to the danger and makes a decent save.

47 Mins – Celtic’s impressive play continues as they seek a second goal. Ralston does well to get past his marker and cross from the byeline but Dundee clear.

47 Mins – On the other side Sinclair gets his cross in and wins a corner.

47 Mins – More determined play from Sinclair, his cross is met by Johnston whose header goes in off the bar to double Celtic’s lead.

52 Mins – Sinclair terrorising the Dundee defence, he breaks into the box but is cut back is cleared. From the corner Ralston has the goal at his mercy from a few years out but completely misses his header!

55 Mins – Another great move sees Rogic go for goal but all he earns is yet another corner.

58 Mins – Great interchange of play between Rogic and Johnston puts Forrest in but he slices his effort wide.

60 Mins – Ralston beats the offside trap cutting in from the right, he goes for power but Hamilton makes yet another fine stop.

61 Mins – James Forrest is replaced by Ryan Christie, both players get huge cheers from the Celtic support.

66 Mins – Sinclair beats his man again to get yet another shot on target but the Dundee keeper is equal to it yet again.

67 Mins – Ntcham bursts into the box on the left hand side and is totally taken out of the play. Looks a stonewaller but corner was the decision, much to the crowds’s astonishment. Ntcham was still picking himself up as the kick was taken.

67 Mins – Dundee under siege, Christie has a great effort which is blocked and the ball falls to Filip Benkovic who shows good composure before drilling his shot into the net for Celtic’s third goal. 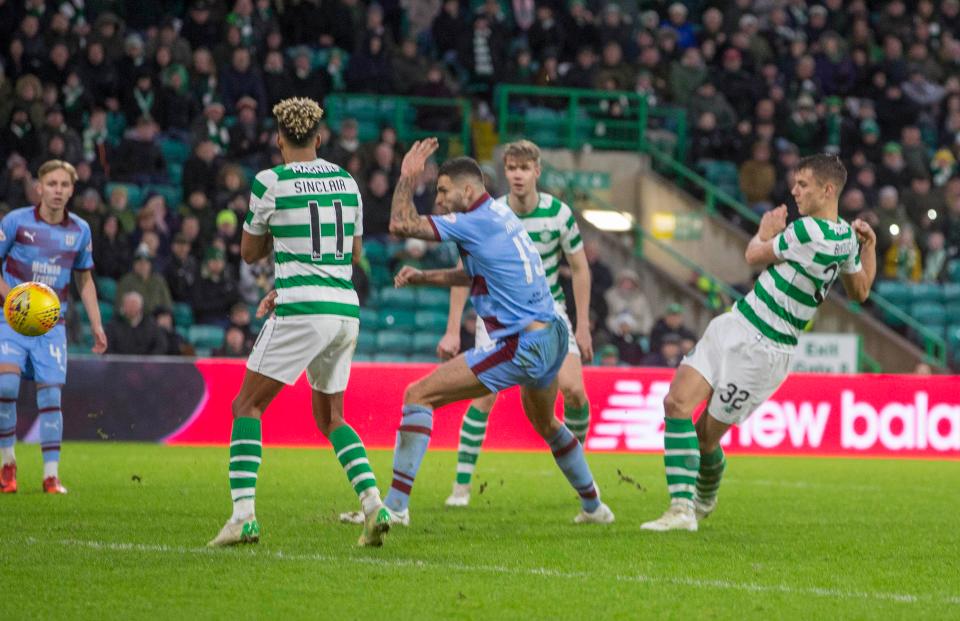 71 Mins – Ralston, ever eager to get forward, wins another corner after determined play from Christie in front of the North Stand.

72 Mins – The Celtic support are on their feet for a round of Stand Up for the Champions – richly deserved for this performance.

75 Mins – The clever Johnston beats the offside line again but the through ball is just too strong thus denying him his hat-trick.

76 Mins – Johnston is replaced by Jonny Hayes and Parkhead rises to applaud the teenager as he heads off the park.

81 Mins – Talking of hat-tricks, Anthony Ralston could have had one of his own today. This time he does everything right then his effort across the keeper comes back off the inside of the post with the young defender left cursing his bad luck. Should have scored.

85 Mins – The energetic Christie send Rogic through but his shot is off target.

88 Mins – Stadium announcer gets huge applause when Mikey Johnston gets given the sponsors Man of the Match.

89 Mins – Rogic hesitates in-front of goal and his chance is gone.

91 Mins – Scotty Sinclair tries to back heel the final chance of the day but Hamilton does well to make the save. It’s been a busy day for Jim McIntrye’s keeper.

92 Mins – Referee’s whistle goes with this supporters still in the ground on their feet and applauding the Champions.