You are at:Home»Latest»Why embracing Celtic’s Catholic Roots is not something that should be contentious

For many years, Celtic Park has been a place that resonates with Roman Catholics. Society has become much more secular today and faith is markedly less prominent in Paradise. However, we do see some expressions of Catholic identity from a section of the support. This takes the form of hymns such as Walk With Me being sung on occasion and the recently popular Papa Francesco chant being aired on the terraces. The inspirators of that song were the Bhoys group, who are identifiable by their huge Popes XI flag. 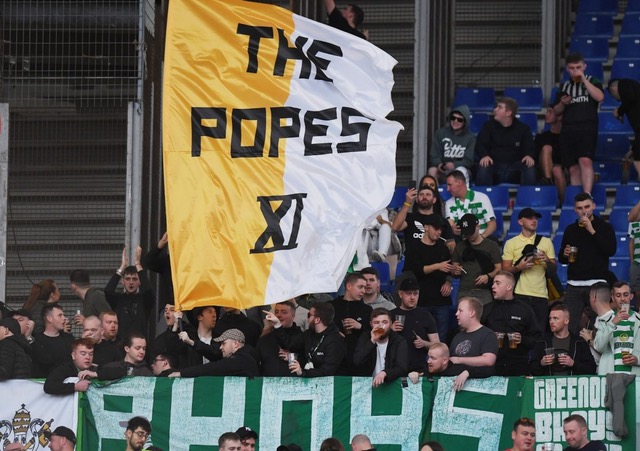 These Catholic songs and banners are uncomfortable to some Celtic supporters. I think a lot of this has to do with the issue of sectarianism in Glasgow and the way that the media reports on such things. Firstly, the insistence from the press to label Irish rebel songs as sectarian needs addressed. One thing that should be made very clear is that songs about Irish resistance to British rule do not have anything to do with religion.

The various conflicts over the centuries in Ireland have been political in nature, despite the British government’s best attempts to present the issue as a dispute between Catholics and Protestants. The most recent phase of war in Ireland arose when Nationalist communities sought to defend themselves after the pogroms that followed the brutal suppression of Civil Rights marches, which opposed 50 years of discrimination. Civil rights and Irish unity was the goal. Seeking independence from a foreign invader and wanting to be treated as an EQUAL (not a superior) to Protestants is not sectarian. The majority of the Celtic support know this and political songs and banners remain prominent.

There has been a muddying of the waters though. Expression of Catholic identity and Catholicism is very different from Irish Republicanism. However, being proud of the club’s religious roots is not sectarian. Pride in an identity is not hateful or divisive, unless it takes the form of being anti other religions or denouncing them. For that reason, a once popular song, Roamin’ in the Gloamin’ has fallen away. It is quite triumphalist in nature. Singing the praises of the current Pope or a Catholic hymn is not the same. The Catholic faith doesn’t apply to everyone, but such songs don’t discriminate against those from outside of the religion. Indeed, I am not a religious person myself, but have absolutely no issue with such expressions of identity.

The reason why I have no problem with these actions, besides the fact that they are not discriminatory, is because they are very relevant to the identity of Celtic Football Club. Celtic was established by a number of people. The primary founding father was a Marist Brother named Walfrid, whilst another Marist called Dorotheus was his right hand man and played a significant role in establishing the club. In fact, over 20 individuals were involved in setting Celtic afloat. To a man, they were Catholic and the vast majority were members of religious organisations such as The Catholic Literary Society.

Celtic was officially formed after a meeting in St Mary’s Catholic Church Hall. The club was set up to support three east end Catholic parishes –  St Mary’s (Calton), St Michael’s (Parkhead) and Sacred Heart (Bridgeton). The Bhoys were instituted to the Poor Children’s Dinner and Breakfast Tables, which was a Catholic charity operating a Penny Dinner Scheme for pupils of Scared Heart and St Mary’s (where Brothers Walfrid and Dorotheus were headmasters respectively) within the St Vincent De Paul Society.

The Celtic committee released the following statement in their first circular, pleading for donations to build a ground: 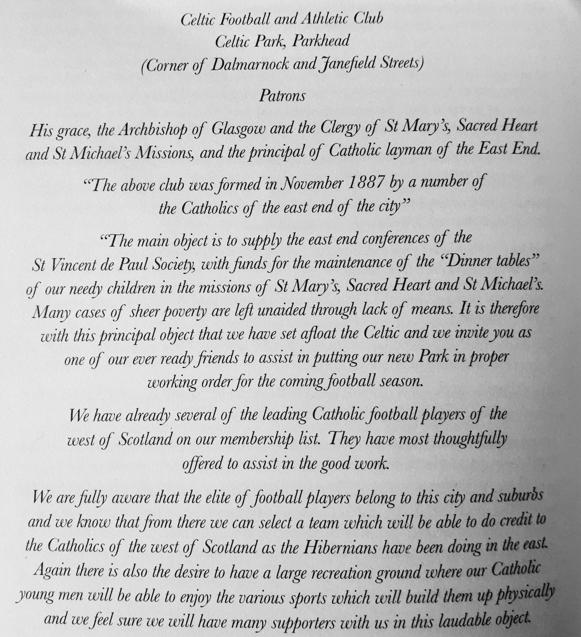 The club was very proudly and publicly Catholic from the beginning. This continued right up until the 1950s.  Priests were given free admission to games and, between the World Wars, The Catholic Young Men’s Society used Celtic Park on a regular basis. The organisation marked it’s centenary in 1949 with an open air mass at the stadium, which attracted 27,000 worshippers (pictured below). 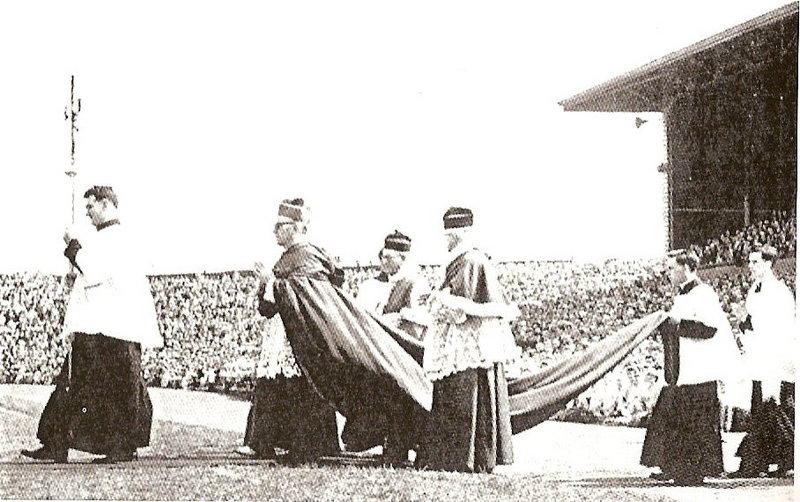 In May 1954, Celtic Park was again used by the Catholic church for the Marian day celebrations.

Absolutely none of this is contentious or anything to be ashamed of. Being Catholic or the club having Catholic roots is not a crime. The fact that people try to paint Irish Republicanism as a Catholic sectarian movement because of British propaganda, or the fact that Glasgow is obsessed with the notion that any dispute between Celtic and Rangers must always be the result of religious hatred, has create a bizarre negativity around this aspect of the club’s roots.

There can be no doubt that the Catholic Church as an institution has done some terrible things. What religious authority hasn’t? However, there is nothing wrong with having faith in the religion itself and, where Celtic is concerned, religious leaders such as Brother Walfrid did a huge amount of good – he practised what the church preaches.

Having examined the foundations of the club and the characters behind it in forensic detail, I tend to define Celtic by the following pillars. Irish culture, Irish Nationalism, Catholicism, charity, inclusivity, entertaining football (the Celtic way) and on field success. Each of these aspirations and factors were publicly prevalent from the establishment of Celtic. Taking an interest in Irish culture, advocating Irish freedom or expressing a Catholic faith is not exclusive. Celtic did that from the start, but also fielded a team of mixed religions since the club’s second season.

We have our defining traditions, but welcome all. We do not discriminate against those from outside of these identities. Therefore, Catholicism is not only relevant to Celtic, but should not be contentious. It’s very different from singing bigoted songs that you hear across the city, which do not simply express pride in the Protestant faith, but actually celebrate the murder of Catholics and Irish people. The two positions are incomparable.

I say this as someone who does not believe in God.

Previous ArticleThis Is The Third Breach Of Covid Regulations At Ibrox, Will They Face The Same Punishment As Others?
Next Article ScotGov on decisive action – Celtic, Aberdeen punished, theRangers praised. Who else was at the party?