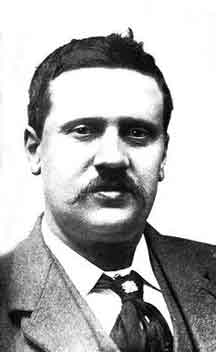 John Herbert McLaughlin was born in Glasgow in 1863. His family roots were in Donegal, and he frequented St Mary’s parish. In that sense, he was a typical Glasgow Irishman and shared a similar story to many of Celtic’s founding fathers.

By now, you will know that many of the men behind Celtic’s formation were taught by the Marists, and indeed by Brother Walfrid, at St Mungo’s. John McLaughlin was no different. He was educated by Walfrid at the school and then went on to the famous Jesuit seminary of Stoneyhurst College in Lancashire, where he obtained the highest honours and was gold medallist for two consecutive years. John also studied at St Aloysius, where he performed in shows alongside others who would go on to establish Celtic. On returning to Glasgow, McLaughlin studied law at the city’s university, however, as a graduate, he decided not to venture into the industry. Instead, he elected to join the commercial department of John Tullis Ltd, leather manufacturers in Bridgeton, working as a cashier. 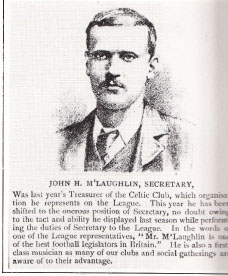 In 1882, at the age of 19, John McLaughlin married Elizabeth Ann Shannon in the Cathedral Lodge. Three months into married life, the couple had their first child, born in Elizabeth’s mother’s home at 381 Duke Street. This was almost a home birth, for the McLaughlin’s lived at number 300 on the same road!

Outside of family life, John devoted a lot of his spare time to music. Like his brother, James McLaughlin, who was a Catholic priest based at Ampleforth Abbey in Yorkshire, John was heavily involved with the local church, and would regularly play the piano or organ during mass at St Mary’s. Interestingly, he also played the piano at many social functions in the city, which led to him performing as part of the Rangers FC Glee Club in March 1888!

Prior to his strange combination of piano commitments, McLaughlin had moved residence to Comleypark Street in 1887. His new address was in the Calton, and it is likely that his contacts through the Catholic Church, coupled with his skillset as a cashier, meant that he was brought into the Celtic project. At 24 years old, he was one of the youngest Founding Fathers, and he had no experience in football. Yet, make no mistake, McLaughlin would soon become the best legislator that the sport had ever seen. His involvement in football would lead to professionalism being introduced in Scotland, together with the establishment of a competitive national League.

John McLaughlin was at the preliminary meetings held to establish Celtic, including the famous meeting on 7 November 1887, when the club was officially constituted. A member of the original committee, McLaughlin was elected as club Treasurer in 1890, becoming the youngest office-bearer in the process. One year later, at the 1891 AGM, he became Secretary. This post was held by John for two years, until 1893, when he was elected Vice-President.

As previously mentioned, McLaughlin’s involvement at Celtic had big ramifications for Scottish football. When he first served on the Celtic committee, the game in Scotland was amateur. The notion of professionalism was something that appalled many establishment clubs, including Queen’s Park, who were the most successful team in the world at the time. This stance became problematic, as the game in England turned professional. Inevitably, Scottish clubs lost their prize assets, as players were lured south by better wage offers, and the growth of the game was halted north of the border.

John McLaughlin was one of two Celtic representatives sent to attend a meeting between the Scottish clubs at the Commercial Hotel in Glasgow, on 20 March 1890. The discussions that evening centred around establishing a League with competitive matches. McLaughlin cast his vote in favour of the idea, and then played a huge part in setting the wheels in motion, becoming the Scottish League’s first Secretary. Though not alone in his efforts, the Scottish League would never have come to be, or sustained its success until the present day, without the administrative and organisational input of John H McLaughlin.

With his work underway in terms of the Scottish League, McLaughlin stepped up to the mark for Celtic in 1892. When the landlord attempted to raise Celtic’s rent from £50 to £450 per annum, McLaughlin remarked, “Being an Irish club, it is but natural that we should have a greedy landlord.”

According to the combined research of Pat Woods and Tom Campbell, in their incredible book, ‘Dreams & Songs to Sing,’ McLaughlin was partly the originator of the ‘Paradise’ nickname for the new Celtic Park, which a local pressman then famously utilised in the headline, ‘From the Graveyard to Paradise.’

It is said that the Celtic AGM in 1892 witnessed John McLaughlin telling his peers that, when the new stadium was complete, “a desert would become a garden of Eden.”

In response, one member asked: “Would the players dream of Paradise when flitting on its sword?”

Shortly afterwards, the local press described the ground as “like moving from the graveyard to Paradise.”

It seems too peculiar to be a coincidence.

It wasn’t long after the club’s move to Paradise that the debate over professionalism divided both the Celtic committee and Scottish football as a whole. The SFA called a vote on the matter in 1893, and amateurism was preserved by 20 votes to four.

President of the national football authority, Thomas Lawrie, moved that, “All associations should unite to stamp out professionalism.”

However, John McLaughlin told those present, “You might as well attempt to stop the flow of the Niagara with a kitchen chair, as to endeavour to stem the tide of professionalism.”

*An extract from Walfrid & The Bould Bhoys by Liam Kelly, Matt Corr & David Potter for World Book Day. See below for our special offer. 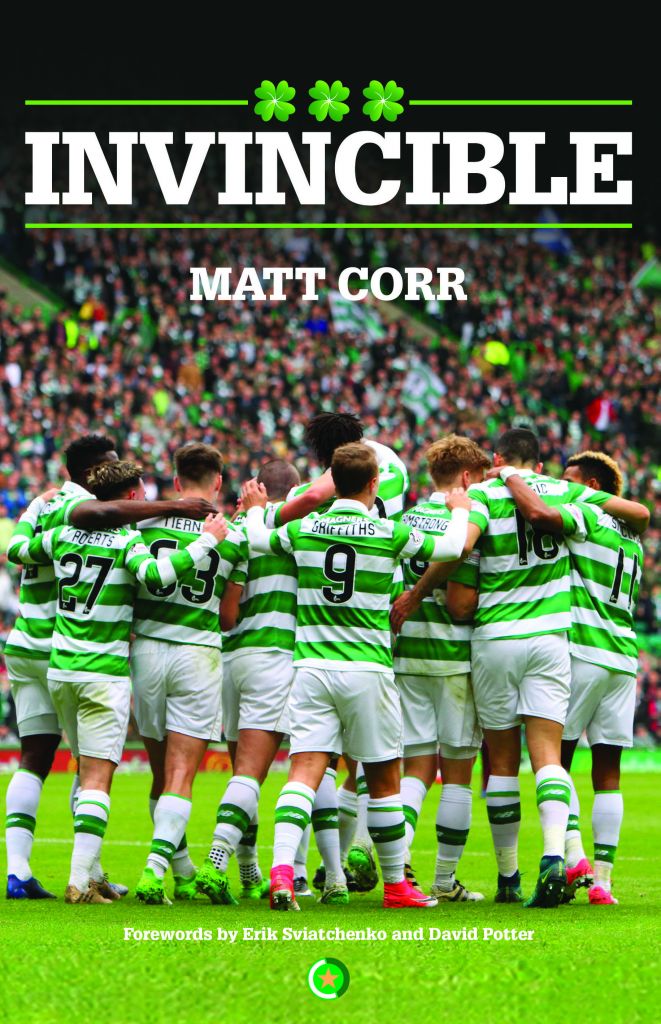