You are at:Home»Latest»McGregor Opens Up on Celtic’s ‘Tactical Tweaks’

Callum McGregor has opened up on the ‘tactical tweaks’ that Celtic made in the wake of the defeat to Rangers at Celtic Park in December. Since returning from the winter break, Celtic went on an incredible run which opened up a 13 gap over second-placed Rangers.

Speaking to the Celtic View, McGregor discussed how the trip to Dubai was the turning point for Neil Lennon’s side as they made a number of tweaks to improve their side. The midfielder admitted that the trip to Dubai brought the team back to Glasgow wit added hunger, confidence and knowledge in the way to play.

Neil Lennon opted to revert to a 3-5-2 when Celtic returned from Dubai, a formation that he was accustomed to under Martin O’Neill. McGregor was a fan of the new formation as it allowed him to get forward. 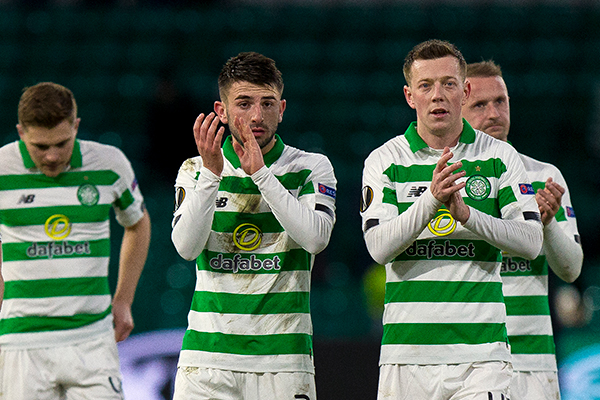 “For myself, in terms of goals, I was really enjoying that spell after Christmas where we’d changed the system,” he said. “That allowed me, Ryan, Ollie or Tom to go forward a little bit more.

“I was getting into goalscoring positions and hit a nice wee purple patch in terms of getting goals. I was feeling good, feeling fit and influencing games, which is what I want to do.

“The volume of goals we were scoring was a combination of the form we were on, the fitness of the players and the system. The change in system allowed us a bit more freedom in terms of going forward because we had the three in front and one behind to try and secure it. That gave us more numbers going forward”

McGregor suggested that Lennon had become tired with the ‘pedestrian’ possession game that Celtic had been playing under Brendan Rodgers that appeared to creep back into the side towards the end of 2019.

“The gaffer felt like we had become a bit pedestrian going forward in terms of scraping 1-0s and things like that. He wanted more of a focus on the counter-attack so that when we won the ball and it was in transition, boys would take off straight away and we’d get runners going beyond. He refocused us in that regard to be a bit more ruthless.

“The goals have been a combination of more bodies and a hunger and willingness to get forward quickly. That’s why you seen the numbers go up around November, December time and then into January and beyond.

“The boys have been excellent since the turn of the year and that’s why we put ourselves in such a good position.”

Previous ArticleJames Curtis: A Pupil Of The Celtic Tradition
Next Article Scott Bain – From Building Site to Celtic Park