You are at:Home»Latest»On This Day: Celtic destroy Rangers at Ibrox in 5-1 thrashing

On this day in 2017, Celtic recorded an emphatic and dominant win at the home of Rangers. There are numerous other famous victories against both Ibrox clubs this century to write about today but let’s start with this one…

Having one week early beaten Rangers at Hampden comprehensively, Brendan Rodgers’ side travelled to Ibrox in the final Glasgow Derby of the season. The Scottish Champions put on an incredible show where 5-1 could have easily been 10. Celtic started well in the sunshine in Govan, fashioning a couple of half chances. John Beaton pointed to the spot when Beerman fouled Roberts – which Scott Sinclair cooly finished.

It was 2-0 shortly before the 20 minute mark when Leigh Griffiths fired a shot into the top corner, sparking jubilant scenes in the Free Broamloan. In reality, when half time brought a pause to the match, Celtic could have easily had 5. Sinclair missed a handful of goalscoring opportunities, Griffiths hit the bar, Šimunović sent Miller into orbit and the Ibrox faithful’s worst fears were being realised. 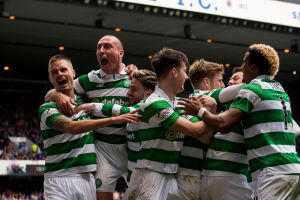 The second half brought further joy to the Celtic supporters, who were in fine voice all afternoon. Eight minutes after the restart and Callum McGregor had scored for Celtic, nutmegging James ‘winning mentality’ Tavernier as he rifled a left foot shot into the net. Dedryck Boyata made it 4-0 with a free header from a Leigh Griffiths free kick, with 65 minutes on the clock. Rangers scored again and their goal music blasted ‘One Step Beyond’ by Madness, to the delight of the Celtic supporters. Those that remained in the ground were subjected to this embarrassment to compound their misery.

Mikael Lustig made it 5-1, dancing through the desperate Rangers defenders before a side foot finish beat Wes Foderingham sparking euphoric scenes behind the goal. 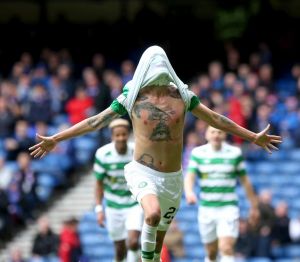 Celtic could have scored more, we were that good. It would be the largest victory for Celtic at Ibrox against any side since the 19th century.

After the game, Brendan Rodgers was honest in his assessment that Celtic could have scored more but that didn’t bother the supporters, who had been treated five victories against their Glasgow rivals, including two 5-1 wins.

“It was a very comprehensive win and my only disappointment is that we should have scored more goals.”

The supporters and players celebrated at full time, the Scottish Champions had put on a show at the home of their arch rivals and those inside the stadium in green & white were lapping it up. The win at Ibrox was a significant event in the Invincible season, it bookmarked the games against Rangers that season – starting with 5-1 in September and 1-5 in April.