You are at:Home»Latest»Arsenal close to agreeing long-term Kieran Tierney deal, Celtic’s sell-on value will only increase

Former Celtic defender Kieran Tierney is close to agreeing a new five-year contract with Arsenal. The 24-year-old will be hoping to help Scotland to victory at Wembley tonight against England; however, The Athletic are reporting that the Emirates club are nearing an agreement that will see Tierney earn around £110k-a-week.

This news will increase Tierney’s value, which will ultimately lead to an enormous increase in the player’s sell-on value to Celtic. Manchester City had been linked with Tierney and it is likely that his performances down Arsenal’s left hand side have attracted other admirers. Although, Arsenal are keen to offset any interest in him by securing a deal to significantly increase his earnings and value. 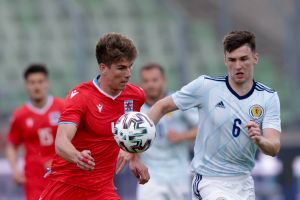 The left-back made over 170 appearances for Celtic, winning five league titles and three League Cups and Scottish Cups during his time whilst enjoying hero status with supporters as being ‘one of us’. The former Celtic defender left the Scottish Champions in the summer of 2019 for a fee in the region of £25m, becoming the most expensive Scottish export. Celtic will, as they always have for exports, a sell-on fee meaning that if free-spending City come in for him, Celtic could stand to make a fortune from the player. It is expected that there is a 25% of the profit from the deal sell-on clause, which is eye-watering when you consider some of the fees in English football.

It is also a boost for Celtic as it showcases to any youngsters coming to the club that there is a pathway for Academy talents, with Tierney progressing to the very top. Andy Robertson can also be used as an example but his route was less linear than Tierney’s but both involved hard work.

Previous ArticleQuarantine Completed, Ange Postecoglou meets up with Dom McKay before heading to Wembley
Next Article Team’s Up – Callum McGregor starts for Scotland at Wembley