You are at:Home»Latest»Damien Duff opens up ‘nerve-wracking’ Celtic interview

DAMIEN DUFF has opened up on the nervy interview that landed him the Celtic reserve manager role. The Irishman was Shamrock Rovers U15 boss when the Scottish Champions made a move to bring him to the club as Reserve coach. Despite being a top pro with a top CV, the Irishman was forced to interview for the role.

Speaking to Si Ferry’s Open Goal show, the Premier League winner at Chelsea told the story about how he interviewed for the job by giving a presentation to Brendan Rodgers and John Kennedy but it left him a nervous wreck.

“I just got a few calls going ‘Celtic would like to talk to you about the reserve team role’ and I was like, ‘What do they want me for?’

“I had a couple of these over a month. Then it was more concrete. Peter Lawwell wanted to speak with me. I rang Peter and then spoke to Chris McCart. It got out of hand then. I was just planning on living in Ireland.

“I thought the job was mine, being a bit stupid. Chris said to come over and have a look around the place and see if you want the job. Then he rings me back an hour later and says, ‘The interview will start at two o’clock. You have to do a presentation, then a practical on the pitch. Then I was thinking, ‘Oh, it’s actually not your job’.

“Then the ego took over and I thought, ‘Right, I’m going to go and get this job, get offered it anyway’. I went over and it was the most nerve-wracking out-of-your-comfort-zone stuff I’ve done. 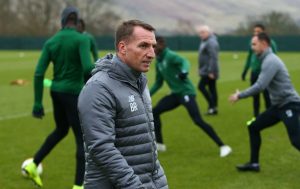 “There was a general chat for an hour and then presenting to Brendan Rodgers and John Kennedy. I played three-box-three here with my 15-year-olds.

“So I was presenting to Brendan how to play three-box-three, mortified, he knows better than anyone. I’ve got my footage saying, ‘If he goes here, he should go here’ and I’m just thinking, ‘Duffer, just shut up, man’.

“Then I had to go out on the pitch for 40 minutes with the reserves who were a miserable group. They’re at an age where they’re like, ‘I’m not in the first team and I’m getting dragged in here at four o’clock in the afternoon to get coached by this muppet from Ireland’.

“It was the hardest thing I’ve ever done, without doubt. Fortunately, I got offered the job.

“Football was just natural to me, you get the butterflies, which is good. This, I was just absolutely rattled. I couldn’t take my blazer off because I had big sweat patches. Ah, rattled.”

Duff was appointed to the first team role a few months after arriving when Brendan Rodgers and his backroom staff jumped ship for Leicester City. This left Duff as first team coach to Neil Lennon and John Kennedy, who were retained after the Treble Treble season. This season past, Duff helped the club win 9IAR and the League Cup before deciding to return home to Ireland for family reasons.

Duff was replaced by Gavin Strachan as the Scottish Champions look to create footballing history by surpassing the record set by Jock Stein in 1974. Rangers equalled that record in 1997 but Neil Lennon’s side are on the verge of immortality.

Previous ArticleDuff makes Griffiths fitness admission but hails “the best finisher I have ever seen”
Next Article Celtic? ‘It’s something that I think about quite a lot’, but Andy Robertson has ‘found a home’ at Liverpool